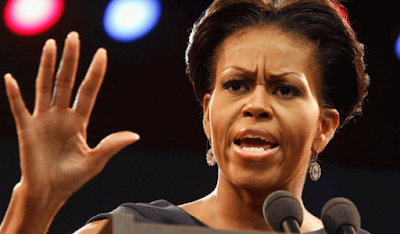 
In this time of American Jeopardy, it is the worst betrayal that a low IQ quadroon of Norwegian ancestry mingled with Negroid is addressing other Hamites in Congress in telling them that "a house divided stands" in direct contradiction of the facts and calling Abraham Lincoln a liar.

The Michelle Robinson Obama rhetoric to quadroons in Congress that "diversity is America's strength" is a lie and a propaganda creation to bring to genocide the American Natural Born whom God planted here.

America was never founded on diversity, was never meant to be diverse and had one absolute uniting factor and that was the Christ of the Reformation in Protestants.

Christianity was the uniting factor of the United States without sword or gulag. Where Muslims slaughtered those not like them to maintain order, Christianity by communion with God. America has always been either or. You are either an American by Protestant Faith or you are a sinner condemned to hell.

The Founders of the United States arrived in the United States due to religious persecution. They understood dark horror of state mandated religion by king. Again Crown and Catholicism maintained order by dungeon and drawing. There was never room for a Joan of Arc, but under Martin Luther, Protestantism began to liberate peoples to life, liberty and the pursuit of happiness.

Michelle Robinson Obama has been proven two zip code size fat ass wrong in her diversity. If diversity was a strength, then her Africans would have been enslaving Americans, as the Berbers enslaved Europeans. That all changed though when Protestant advances in Christ drove Islam back into the dark ages.


What truly makes our country great is its diversity. I’ve seen that beauty in so many ways over the years. Whether we are born here or seek refuge here, there’s a place for us all. We must remember it’s not my America or your America. It’s our America.
— Michelle Obama (@MichelleObama) July 19, 2019

If one examines the reality of the Skirt Squad or the 2 zip code size ass Michelle Robinson Obama, the reality is, it was their bloodlines all contain failures in genetics, and it was only the Caucasian penis implanting that race into their swarthy nethers, schooling them to become Protestants, and allowing these Darwin peoples to feed off the work of Protestants in the Anglo Americans.

Michelle Robinson Obama in her Negroid  is a female, who in Africa would have been eaten by a lion, as her Barry had his face ate off by a hyena when he fell down drunk from millet beer.
Alexandria Ocasio Cortez in her Puerto Rican, is the product of the advance of the White Spaniards, conquering Indian hordes, impregnating them and producing a vermin people who do more than just shit in the weeds. AOC in her Spanish Popery was displaced as Vaticanism was a feudal state where the Padre ate steak and the beaner ate beans and provided vaginas for the Padre's penis.
No advancing people can advance on those centralized powers.

The old line of Marxism is divide and conquer. That is what diversity is. It is a fact that in Chicago Michelle Robinson's father was not interested nor employed for diversity. It was the Afroid voting in block for the democratic party and welfare bribes which was their religion.
Barry Soetoro, the non American Natural Born, in his first usurpation of America, engaged in community organization. That is centralizing power, wiping out diversity and obliterating all challenging thought.
That is the problem for a quadroon like Michelle Obama, telling other quadroons, that their common diverse thread of failures in being products of feudal systems, rejecting Christ, will unite them like cancer to obliterate the White American host, so they can inherit the work and war of Protestants who established all the United States is.

the 2 zip code size fat ass Michelle Robinson Obama, should bring her message not to the Quadroon Congress, nor President Donald Trump, who is about as weak as water in his phrases of "send her back" as he likes being a Bush kinder and gentler Nazi, but bring that message to LIBERALS. For it is liberals who have met in national assembly, rejected Birther Hussein Obama, have cast off the Obama pale of Joe Biden, and have uttered words like "they can make the Negroid to learn to like their chosen white mistress".

Yes liberals have met and decided that they can think for the Nigger and pick the Nigger's leader, as one Designer Negro in Obama was all the sullying up they want to experience in politics. 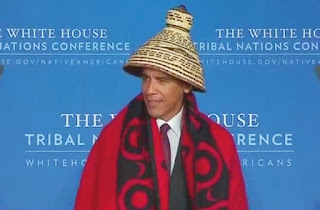 For a crowd that thrives on accusing America of perpetuating white supremacy, progressives seem to have little fondness for America’s first black president. In a campaign where progressives preach the need to energize voters of color, they seem indifferent to the preferences of black voters. The left prefers a well-known candidate such as Warren (with an almost equally well-known likability problem), who polls in single digits with this crucial constituency, all the while telling themselves they can make people of color like her.


Yes Netroots Nation, in a world of Skirt Squad, as Nancy Pelosi in carrying out her mission of returning AOC to toilet scrubber to the Kennedy family, have decided that in 2020, there is no place for quadroons in 2020. Corey Booker gets zero support of dollars. Kamala Harris levels White Racist Joe Biden, and Joe Biden is still leading, but Netroots Nation, has provided the presidential douche to Elizabeth Warren in all her White Privilege as they pour money into fag White Ass Pete Buttigieg.

Liberals have crawled out of the primordial ooze of the Obama anus and are not going back to that cesspool. Bill Clinton was black enough for them. They watched Oprah on television. They allowed Obama to shit in the White House for their secular sins. These plantation quadroons can carry the message, but their minstrel show is what they have evolved past and now it is time to return to what they are comfortable with and that is White that has not been Obama sullied.

In God's America, there is not a place for everyone. God has rules and standards. Violate those Commandments and the exact effects occur as Deuteronomy 28 as God stated that curse would begin, and it is what America is plagued by.

Protestants are what God blessed and  advanced humanity. There is nothing diverse in this Faith. There is One Way, One Truth and One Life. Many paths lead to destruction, but the straight and narrow is not a boulevard.

So in the end, the end of the United States, it is due to the fact that Michelle Obama called Jesus the Christ a liar and Abraham Lincoln a liar. That is why America is falling apart, because it has an apostatized diversity, instead of the unifying Faith of a nation of prospering rugged individuals united in that One Protestant Faith, in One Faith, One Baptism and One Life. 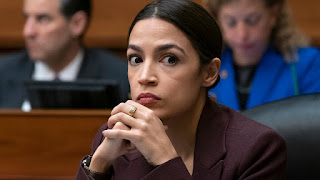