The Senen Thicker Than Water 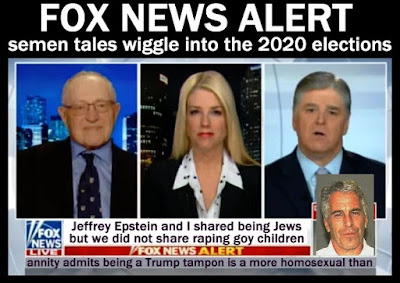 I had wondered why Allan Dershowitz had grown a Trump soul in defending the Donald against the Mueller Witch Hunt, and still do wonder, but not enough to invest time in it, as the real Shylock came out at an opportune time recently in Dershowitz announced he would be voting for a sodomite, baby butchering communist traitor for President in 2020 once the democrats nominate who has been chosen for them.


Alan Dershowitz says he would "enthusiastically" vote for ...

https://www.newsweek.com/alan-dershowitz-says-he-would-enthusiastically-vote-biden-over-trump-2020-matchup-1443945
Alan Dershowitz, a longtime Harvard law professor and frequent contributor to Fox News, said Thursday he could "enthusiastically" support Joe Biden over Donald Trump if the two meet in the 2020 .


Yes the Biden who sniffs children, feels up women, is a plagiarist, whose manwhore son was screwing his cancer brain sons wife, broke up his marriage, then dumped the widow for a South African blonde which Biden called "love".......is the kind zero character that Allan  Dershowitz enthusiastically votes for.

The way he turned justice into mockery by raping the memory of Nichole Brown and her family, while ass prodding that Jew kid, Ron Goldman to set OJ Simpson free, is the kind of person Allan Dershowitz is at soul.

So is it any surprise that when this child molesting Jew, Jeffrey Epstein, who was protected by the pedophile ring which operates across America and protected him under Obama Biden, was arrested, that Dershowitz fled from an interview with Sean Homo Hannity, and appeared on another radio program whining about Epstein's arrest was politically motivated and Dershowitz was pleased his name was not in the indictment.


Dershowitz breaks silence on ‘politically motivated’
Epstein indictment: ‘I just didn’t know
the person at all’
BizPac Review, by Frieda Powers Original Article
Posted by Imright — 7/9/2019 7:07:21 PM Post Reply
Alan Dershowitz finally spoke out about the Jeffrey Epstein case and said he believes that allegations made against him have been politically motivated.The Harvard law professor emeritus spoke on a radio show Tuesday after failing to appear for a scheduled interview on Fox News’ “Hannity” on Monday night following Epstein’s indictment on sex-trafficking charges.“The indictment itself is fairly bare bones,” he said on “The Joe Piscopo Show” Tuesday. “From my point of view, the important thing is that it doesn’t mention me.”Dershowitz served as one of the high-profile lawyers for the billionaire financier who was arrested on Saturday and charged with one count of sex trafficking of minors and


This blog exposed all of this already that Epstein's indictment is for the purpose of exposing them for the pedophile network they are which began with Pizzagate Podesta. Are there fraud Republicans who are pedos? Sure as hell as the Bush family was parading around that Jeff Gannon in a fag sex scandal, but the issue here is, the control which placed Donald Trump into power, turned him into a National Socialist, just moved liberal New York to haul Epstein up by the balls on Joe Biden's main mast, because Jews for hire like Allan Dershowitz can betray Donald Trump at Biden moments, but this is bigger than Donald Trump, and that group is going to use the Pedo Left to make up for that 15% vote margin which Trump needs, as Trump has been betraying his Christian Conservative base in everything from WinRed to Protecting America.


So the intellectual communists like Allan Dershowitz think this is the same bastardized America as before, but when the pedo ring of the left is being exposed, it puts the pedo ring on the right on a leash, so they don't do the Dershowitz on the Don.

Even though Donald Trump is experiencing an attempt to link him to Jeffrey Epstein, as Trump calls everyone a great guy, the reality is, Jeffrey Epstein was protected by George W. Bush and his Jewish attorney general,
Michael Mukasey.

In June 2003, Democratic New York Senator Charles Schumer submitted Mukasey's name, along with four other Republicans or Republican appointees, as a suggestion for Bush to consider for nomination to the Supreme Court.


When you have Charlies Schumer recommending Mukasey for the Supreme Court, this is a political stooge of the swampland, and this is who let Epstein off.

Justice had prepared a 58 page indictment of Epstein in 2008, but at the last minute gave the Clinton pedo provider a sweetheart deal, where the feds could not touch Epstein, the victims were never notified of the deal, and Epstein was charged on state charges which were nothing. Epstein would have been in prison for life on the federal charges, but was instead vacationing in Florida custody.
Jeb Bush was governor of Florida until 2007 when this investigation was taking place. Charlie Crist, oversaw the details afterwards in the sunshine state.

Florida prosecutors had prepared a 53-page indictment accusing Mr. Epstein of being a sexual predator. But those charges were shelved in 2008 after an 11th-hour deal was reached between the United States attorney’s office in Miami and Mr. Epstein’s lawyers.
The agreement granted Mr. Epstein immunity from federal prosecution and let him plead guilty to two prostitution charges in state court. Federal prosecutors arranged for the plea deal to be kept secret from Mr. Epstein’s accusers until it was finalized in court.
The deal let Mr. Epstein avoid a possible life sentence in federal prison. Instead, he spent 13 months at a Palm Beach jail and was permitted to leave the facility six days a week for work. He was also required to register as a sex offender.

These are the #NeverTrumpers being exposed in this along with their Clinton connections for the 2020 elections.
It was pedophile politics which got the child rapist Jeffrey Epstein off in the Bush years. It has come full circle now and Allan Dershowitz can state a truth that this child rapists indictment is political, but Allan Dershowitz is about to discover that semen is thicker than water. This is going to be a sticky mess which will bring more blood sport than any indictment of Hillary Clinton or Birther Hussein Obama. 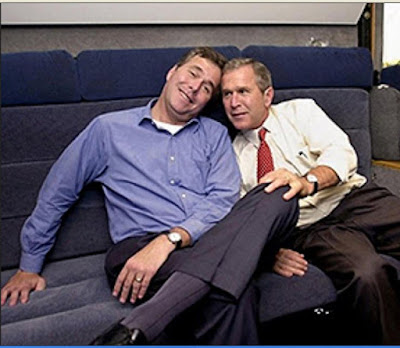 Luongo - Epstein's Arrest Tells Me Trump
Is Now Out For Blood