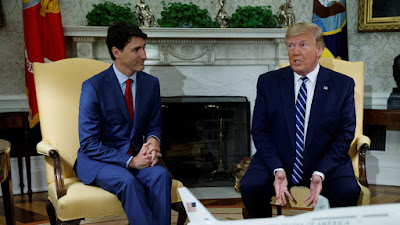 
I mean, where Justin's cock should be is the Great Depression
and where his balls should be his scrotum is in Recession

As the Lame Cherry predicted and then informed you, and has now confirmed on the actions of the Federal Reserve, cutting interest rates, the United States on the basis of Donald Trump, employing Gary Cohn, Goldman Sachs extensions of Obama tax rapine policies, has driven the United States into a recession on the back of the Obama Global Super Depression.


Fed Cuts Rate By a Quarter Point The policymaking Federal Open Market Committee drops the target range for its overnight lending rate to 2% to 2.25%, or 25 basis points from the previous level. CNBC

Donald Trump can rail in perfect 2020 election politics cover, in running against the Federal Reserve, but the fact is the Fed was raising interest rates in response to Donald Trump's continued MASSIVE DEBT SPENDING based on Obama programs of Obamacare, High energy prices, and Obama tax rapine, produced Trumpflation.
It Trump continued Obama spending, which caused the Fed to try to absorb the massive debt being expanded by throttling money supply.

Trump: The Fed made a 'big mistake' raising rates and is ...

https://www.cnbc.com/2019/06/10/trump-the-fed-made-a-big-mistake-raising-rates-in-december-and-is-very-disruptive.html
Jun 10, 2019 · Trump: The Fed made a 'big mistake' raising rates in December Squawk Box President Donald Trump criticized the Federal Reserve on Monday for raising interest rates too quickly and giving the ...

The big mistake in this was Donald Trump being put on a leash to save himself in his Trump Trans, not holding Mike Pence accountable to have his friends of Paul Ryan and Mitch McConnell, pass a Reagan Kemp tax stimulation for all Americans, to repeat a John Kennedy and Ronald Reagan economic policies which benefited America and the world.

Again the repeat is, the Lame Cherry warned all of you in 2017 that Trump policy would kill MAGA, destroy any recovery and would produce a Trump Recession on top of the Obama Global Super Depression.