Trump Rots the US Military 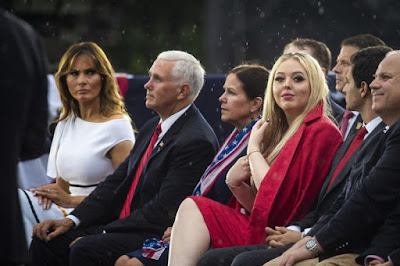 Man that Vatican Girl Melania has some real rosary bead, if looks could kill, attitude!!!

There is a deliberate move in the watch of Donald Trump as President of the United States to defeat the United States in the next war. As Mr. Trump is Mr. Open Borders and Bring in the Vermin for Slave Labor, he is completely aware of what the Pentagon has been engaged in.

This began not with Obama Gender Benders, but with the protocol that as Americans are too fat and stupid to throw grenades or defeat enemy in hand to hand combat, that military training would by pass  the need for physical training.

Now of course there is a new protocol in paying people a quarter a million dollars to join the Trump Army, but they will not let anyone in the army who will fight.

The U.S. is looking to transform its infantry into a higher-caliber fighting machine – and one that takes home a significantly bigger paycheck, too. Officials in the Pentagon's Close Combat Lethality Task Force are considering recommending that those recruited for the infantry should be no younger than 26 – so they can gather more life experience before enlisting – and that they should be offered a $60,000 annual salary with $250,000 bonuses,(Snip) "There is truth in this fact that we have not paid great attention to this idea of specially selecting people and incentivizing infantrymen

When you read the word LIFE EXPERIENCE, that translates to people who are old enough to know it is stupid to obey orders that will get them killed.
The entire reason that 18 year olds were chosen to be in the military is they do not think that they can get killed, and their minds are open in basic training or basic brainwashing where they will react in panic to fight instead of running away.
You put 26 year olds into this equation and the training will not condition the brain. You will get those nutty Arizona Cardinal gungho types who die as cannon fodder as they think the world is all pussy, but for the most part a 26 year old will think and when orders arrive, they will be thinking how they can figure out to not die so they can collect that 250,000 bonus.

Americans do not want to be in the US military as it is all faggots, rape, politics and a medicated happy pill where you commit suicide for the global order, if you have not got yourself killed on your 50th deployment.

As the rot is in  the US military from the Pentagon down, the only way to fix this is to return the military from a Truman nigger social experiment to Obama's dick up your fox hole reality, as no one wants to join that kind of leftist sorority. That is the reality in all of this, and America can not win a war with what is being implemented deliberately, as these are globalist traitors who are constructing the end of the finest military the world has ever known, by design.

As this President has not removed, arrested or fired any of these traitors, this is Donald Trump policy.