Which came first the Trump or the Egg 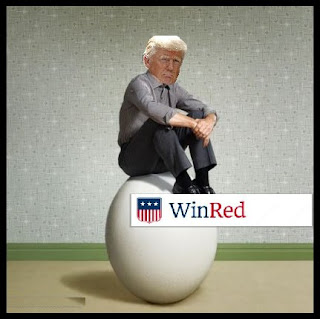 
In one of the most twisted ass movies ever, Mean Guns, Ice T makes one of the most intricate of story lines, which reminds me of the pageant behind the shadow screen who is Donald Trump.

This blog has shown you more than anyone else what has taken place behind the shadow screen. Too much as it is dangerous and those who want the secrets kept have tried to silence me. What fun would it be for those who do this though if the monkeys in the zoo did not know where the bananas all come from.

In the creation of WinRed, the robbery program to steal poor American's dreams, the President directed Jared Kushner to unite four powerful factions of the RNC raising money, and put it under one person's control, and that person was Gerritt Lansing, which makes absolutely no sense as he was writer who milked goats in Greece.


The thing is everyone thinks Donald Trump just appeared in the GOP in 2016, but in this tweet praising Lansing in 2013......that is three years before any of this took place and six years before Jared Kushner handed all your personal information for sale to Lansing.

We know that Lansing did not have a superior program for the GOP, as the GOP was using Anedot, according to Erick Erickson.

Trump himself has once weighed in personally on Lansing, tweeting in 2013, “I am hearing that @NRCC Digital Director @lansing is doing great work expanding and modernizing @GOP social media. Good – we need it.”)
Brad Parscale, Trump’s digital director, said that, while he understood the potential perception of a conflict, he was unaware Revv was owned in part by Lansing when he selected it. Parscale said he picked Revv because it was “technologically superior.”

All the principles were there in 2013 riding on the Romney strawman ass  beating by Obama. Mike Shields was there. Katie Walsh was there and little Gerritt Lansing was there in the GOP too. Working on the National Congressional Staff as their digital director.

The thing is, Gerritt Lansing in his criminal background check by the FBI for his White House job working for Donald Trump, did not disclose he was working on this position. That is most interesting as he was so much on the radar that Donald Trump was bragging about him........and no one else.

I remember at times  like these that Uncle Gordy of Jeff Rense sphere stated that Trump's people were approaching him like others to find out how to manipulate people long before we ever knew he was running.

We know that a control created a group of intelligence moles who detested Hillary Clinton, beginning with Julian Assange, Edward Snowden and Chuck Manning. We know the Missing Link was later part of this in the framing of Donald Trump to flush out what was the Obama deep state of MI6.

We know that Gerritt Lansing was working with Josh Kushner in the Strike billing credit card platform for Lansing's Revv, which moved all other programs aside at the RNC and this is what Donald Trump was praising.

Donald Trump was a DIA leftist asset at his entry into the race. It is the group he began with in Mike Flynn, and the group from Herbert McMaster, Mad Dong Mattis to John Kelly who undid MAGA from the inside. They were weeded out and what filled the roles were the Pence mafia and Kushner Jewry. The Jews were replaced with this Pompeo CIA group to which Mike Pence is apparently second to.

In all of this, there has been one constant and this is what Donald Trump gave MAGA away for and that is Ivanka Kushner, the Princess. It all lays at what Donald Trump had Jared Kushner build WinRed for, in violating all of your personal data. 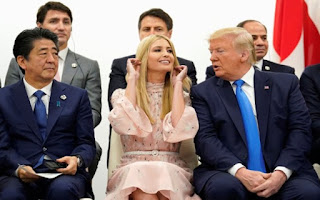 It is probably too dangerous to know or post the genesis  of all of this beyond what has been revealed here in Lame Cherry exclusives in matter anti matter. The future though is not such an event as it has not yet happened.

What WinRed looks like is not a money laundering and bribery scheme like ActBlue, for Donald Trump 2020.  As Mike Pence is not squawking, Big Koch is no squawking. Bush fam is not squawking, this is the adults who are managing this and Donald Trump is carrying out what they have on the agenda, just  as Obama did, just as Jeb and Hillary would have.

The pay offs appear that Donald Trump is reinstalled in 2020, and Mike Pence will inherit 2024, where the real key to WinRed is, in why Jared Kushner built this money machine sucking the life out of all political candidates on the right, so that the neo Trump socialist party, which is being formed from the splintered democratic party, will in this Trump union, elect Mike Pence, and his female Vice President of Ivanka Trump, the darling of foreign and domestic policy.

WinRed is not just about finishing off Conservatives in taking away the finances of the poor to fund contenders, but to make Ivanka last man standing. It appears Donald Trump has been assured for his legacy that his Princess is going to be the first female President and a Jewess, for real history.

Whatever kind of dinosaur was in the original Kushner Lansing egg, in which the reality is Donald Trump entered 2016 for the reason of promoting his financial empire as everyone was being told. Jared Kushner and the Trumpkins never thought their father was going to win, as they knew it was a publicity stunt.....but something more was involved as Jared Kushner was late to this game, as Trump did not have a ground game or any real advisers as it was Kushner who was called upon by the Jewish mafia to fill in the blanks.

The WinRed point in this is, it appears in 2013 that Donald Trump was positioning his son in law with his brother Josh, to seize control of the Republican party's finance raising mechanism.  Think of it in the kind of data base which the Kushner's would gain access to for Trump Brand. All of that data on each of you, in what you purchased, when and how to market to you. This could set trends in selling products from Ivankawear to Trump resorts.

Yes a funny thing happened on the way to the publicity stunt and gaining monopoly control of one of the most exact marketing data bases available for a corporation, in the people who were assisting Donald Trump at DIA, transformed him into a candidate for their purposes.

Donald Trump came at this as WWE theater for publicity as a diversion and a reward  for his cash strapped son in law, but was transformed into the guy who in 2017 was apologizing for letting Americans down, and by 2018 he had handed everything over for a deal he could settle he sold his soul for, and that is his Princess as president.

The buzz in all of this was the creation of a political data base as a marketing list, and controlling it. When there is proof Donald Trump picked out Gerritt Lansing to praise in 2013, who would appear with Josh Kushner in a money changer system for the GOP, and that same Pan Boy was handed over the control of a billion dollar monopoly by Jared Kushner in 2019, that is a coordinated time line and not chance coincidence.

The same party splitting the GOP under Bush fam is being unleashed on democrats for 2020. All are sheep right and left to be sheared. There appear no innocents in this, and the question in this is, what will  the voters do when they discover that Donald Trump did not happen by accident or a whim in running. That there is enough evidence now to prove to a Grand Jury that Donald Trump was involved with the liberal Kushners in a scheme to gain control of one of the greatest money making ventures available and it began in 2013 and was completed in 2019, and it is aimed at robbing poor Americans as ActBlue is for liberals, to sponge all available resources from any upstart candidates.
Granted this is more humane than Bush family destroying all the Conservatives in smearing them or Obama throwing all contenders like John Edwards in prison, but it is an absolute weeding out process to remove contenders from the Christian Conservatives to have no finances available. Katie Walsh literally dried up all the resources in 2016 for Donald Trump in donors, as none would donate. That was not to make Trump lose, it was to make certain that Donald Trump would not beholding to Conservatives and Christians.

What this information means, is not that Donald Trump will lose in 2020, as this is being set up for the election to be awarded to him, as it was Obama. What this information will accomplish is the negating of the 15% which provided Donald Trump the cushion so Hillary Clinton cold not steal 2016. What this 15% means is the crack in the Trump National Socialists he is supposed to lead, so that it will never be the power that Webster Griffin Tarpley stated those behind this, envisioned it to be.

Obama cut a number of powerful people out of deals. Donald Trump with Jared Kushner, has cut out a number of very powerful, wealthy and connected people.  They are going to be more upset and be able to do something  about it than the millions of poor who are being fleeced by WinRed and ActBlue.

That 15% is what the Andrieu Rierra gambling program works on and that 15% has been breached. Those behind this have hatched this nest, but now have the chickens squawking.
The Mockingbird has these diversions staged from the left whining about the dead issue of Russiagate, but there are real issues out there, and WinRed is an issue, and when the CIA New York Times and Washington Post do not report on WinRed being rolled out in where it originated, who is behind it, why a monopoly was awarded, and just who is Gerritt Lansing and who was he being backed by, that is a cover up and it proves that this is a key mechanism in denying Americans candidates they can trust on the right or the left and are being again only offered the chosen few who always betray them.

Hillary Clinton gets multi million dollar book deals. Michelle Malkin sold her website for millions after leading people on the right away from the Birther issue. Mosaad pays people off all the time. I would be fishing if I had not been treated like a cheap whore and dumped in an alley.

Gerritt Lansing got a million dollars in 2016 as a front man for the GOP operations to create WinRed.

No one should be given a monopoly of your data worth billions of dollars and not have one dollar provided for to elect candidates you would vote for and not foreign vermin and Wall Street financiers.

Again, once again another Lame Cherry exclusive in matter anti matter, because no one else is Inspired by God's Grace to root this information out.