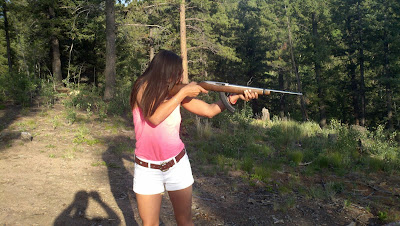 As another  Lame Cherry exclusive in matter anti matter.

First I would like to say that corn was harmed in the making of this blog post.

With that stated, my brother was back for a family thing and had his arsenal along. TL has only shot our stuff and I am waiting on the big donations, so that is limited, but the brothere had along this time for protect a Ruger SP 100 in 357 Magnum and a Ruger Mark IV target pistol that he got from work for like 50 bucks.

I am no pistolero, but can kill human size things in rock throwing distance, even if I can not shoot the eyes out of a snake. TL is a better shot, and after a couple of clips was doing very well with the Ruger 22. That is a very nice handgun, a real innovation in easy take down and cleaning. The Mark I was spectacular, but Ruger has kept at it with some making the egg better.

The 357 sounds like you are hitting a metal plate with a hammer. I wound not think from a 38 Special in a quarter inch that this would make that much of a difference. It does though as the 38 seemed tame and nicely balanced in the heavy Ruger.
TL did very well with that in one cylinder to just try it out to see for our future purchase list.

My brother just loves Springfields in revolvers and 9mm. He is right in they are the best of guns, but at 600 bucks a gun, that hurts in this bad economy. I also am not a fan of semi autos. I like revolvers as there is never any jams, as the Ruger did jam and sure as hell I figure in a gun when I need one, a semi auto is going to jam.

We were blasting at the end of the drive, as I don't want to scare wildlife on the place, and as TL and I were baking the heat, the brother went back to load up the 357, whereby he was attacked by our two gobblers, Golden Naragansette.  I probably do not have that spelled right, but daily I have to beat those two with an old rag weed stick from last year as they spurred me once and tried again this morning.
So as we stood by the mailbox, I watched the brother playing with the turkeys. He threw his pistol case at them, then his box of 357's. The Ruger came flying out and he lost a clip. Then he grabbed the garden hose and was flailing at them like a medieval knight. It would have been more entertaining with a beer and some shade, but I think the turkeys won, as they were back and I had to run them off.

I told them this morning to not pull that shit with me and one tried to spur me, and when I warned them off, they actually moved off and behaved. Probably were pissed about getting hose whipped.

Both TL and the brother have passed death sentence on the gobblers. I hate to do that as they are expensive and I hope to get some hens to breed. I actually caught a wild one that the goddamn horned owl did not run off, and fed her all winter with the chickens. She is in the yard with the gobblers all the time, roosts by Baby Moo and is a fixture here, but was a young hen last year and did not set, much to my chagrin this year.

So that was my July 7th. Shooting brothers guns, brother throwing pistol cases and shell boxes at bully turkeys and TL having a good time shooting. If I had my dream come true list, I still would like a Smith Wesson Model 10 in 38 Special or the Ruger too, but would only shoot the 38's in them as while I like carrying a handgun as all women should, I just am not a shoot the nuts off a rapist trick shot artist. I can hit the body cavity and that is about all the time I have to invest in being Annie Oakley. Put it this way, I love carry as you can't haul a shotgun into the grocery, but all the same if I mean business, it is a 12 gauge with buckshot as I hit where I aim with that.

Same with turkeys. You pop them in the head with a 410 as a pistol will have you missing that head every time. Is why when I camp meat grouse and pheasants, they get a 22 hollow point in their ribs. Damages no breast meat or wings and puts them down. I just am not feeding upland game and housing it all year so rich people from urbania can come out and shoot thing things up and take home the birds.

Sure you get into trouble for stuff like that, but no one ever posts that is how you kill a bird without wasting meat. I had to learn that by the Grace of God, and think of all I saved you now when the world melts down.

Anyway as you have not told me what you did on July 7, that is about all I am going to share on that one.