A Nation of Morons 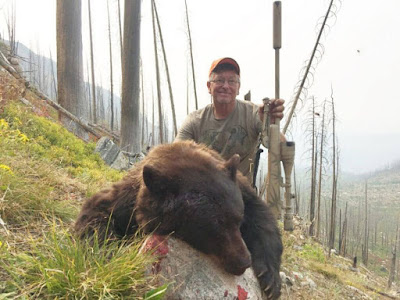 America is a nation  of morons, which all of you know, but the story of Robert Stalley who is 58 years old out of Pierre South Dakota is what is wrong with America.

The short version is Stalley purchased expensive licenses for deer and bear in Colorado, filled his tags and then not wanting to eat bear meat, left the carcass. In weed smoker Colorado though, you have to present the skull, the hide and meat for proof that you did not waste any bear meat. Stalley presented a bag of deer meat, told the anal gopher police that he ate some and gave some away, and with that they spent 2 years investigating this, after numbers of hunters phoned in to the gopher police that there was a rotting bear carcass on the mountain.

The Lame Cherry looking at this is Stalley is not the problem. The problem are these trained "hunters" who work for the police state and start phoning the cops up, instead of minding their own business. That is the East German, Warsaw  Pac, Soviet Union, Communist China problem with Americans. They will confess to anything and turn everyone in, when they should be like a Nigger in the South Side keeping their mouths shut.
It is a sorry day when when a Spic or  Coon has more brains than white people.

Was Stalley stupid? Damn straight he was stupid. Stupid because he shot the bear in a burn off area. Yes those terrible wildfire burned the trees, so food could grow, so the bear had something to eat and the bear war there. Oh wow so burning the forest down instead of cutting it for lumber is a good thing, not bad.


Here was a comment from some old dufus in Florida, going extreme.


I am 82 years old and was raised with a rifle in my hands. In those days of my youth, we lived with no fences in Florida and open woods. Open range was ended in 1950! We killed Buck deer and turkey hunted often in season. We used open sights and used every part of the animal we took! The person who uses sophisticated weapons like this man, who killed a bear and left it for the buzzards, should be given a more severe sentence than he received! No real hunter ever murders a beautiful animal without a very good reason. “Fun” or the euphemism “sport” is not a reason to kill a man or animal unless you are a monster inside! I for one do not want to be in the woods with someone who is out to kill for “FUN”! Too bad the Bear couldn’t shoot back!


So for leaving bear meat to green, this human says another human should be murdered. As I stated, Stalley is not the problem in this, it is the Colorado wildlife and these police state trolls who looking for ways to stick their noses into things which they have no business in.

The gopher police, have now labeld Stalley as a "poacher".

POACHER: Someone who hunts or fishes illegally on the property of another


How does someone who has a license and is legally hunting in Colorado become a poacher? Well the asstard college boys of Colorado have witch hunt twisted the law to mean if you break the law afterwards that makes you a poacher they can steal money from.

Oh and here is the penalty phase.

He is banned from hunting and fishing for twelve years, fined $3,415, and placed on unsupervised probation. He also had to forfeit his rifle, which in the trophy photos is fitted with a scope, bipod, and suppressor. It’s unclear whether he had to forfeit the accessories, too.
The 2019 Colorado Big Game regs state it is a felony to kill big game and not take home the meat.


So not eating bear meat, puts you into the same class as murderers and rapists. That is what a nation of morons is in the complete conversion to Soviet America has taken place. That is America in you got an idiot, who have a bunch of trained trolls turning you in, and a KGB police state stalking you.


In lieu of this law enforcement, I call upon President Donald Trump to descend on Colorado with the FBI on the charge of GERM WARFARE, because Colorado was doing studies in a pen of Mad COW, or Chronic Wasting Disease, and when they were done, they opened the pen door and let loose all the diseased elk. which have now spread across America killing animals and people.
When Robert Stalley gets strung up for rotting bear meat, it is time to hall the entire Colorado Wildlife department to Leavenworth and do a mass hanging, as germ warfare is a crime against humanity and no one has yet arrested the biologists, conservation officers, state officials who were involved in this crime against humanity.

Start arresting the gopher police and their trolls, executing them for their felonies, and an amazing thing will happen in game wardens will tell nosy people to mind their own damn business and the carrion eaters will get fed as nature intended.
But then Jack Taylor running up the Colorado expense account, has not been able to find the arrest button on Mad Deer, or apparently himself as he killed two bears without a license....but oh that's right, in the police state, they can break the law as there is a difference......except the bears are just as dead as the one Stalley killed legally.

Colorado Parks and Wildlife rangers kill two bears that were ...

https://www.denverpost.com/2017/06/29/two-bears-euthanized-steamboat-springs/
Jun 29, 2017 · Colorado Parks and Wildlife rangers kill two bears that were breaking into Steamboat homes ... "Obviously a hard decision," wildlife officer Jack Taylor said. "When we get one that's ...

This is what is wrong with the United States in Colorado is morons and should be left to rot down, with it's dope heads, California liberals, police state and it's diseased population of germ warfare wildlife which they created illegally.