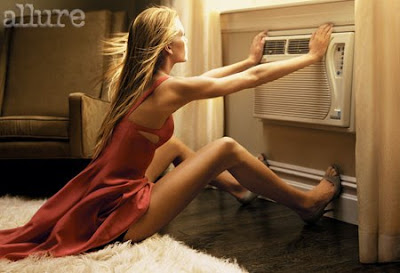 So TL and I go over to check on the Uncle, and I can hear this motor running, and think he has the fan on, as it is sultry.

We go inside and he has the air conditioner running, with the windows open.

I am most amused about this, but as it is his money and his house, not anything to be said about it.

The thing is Uncle can not take AC he says, so I figured he had it on just to cool things off in the house and the ozone layer. It was when we got home and were out on a walk that I thought, "You know that AC still has the cover on it".

As that blows hot air, and I am responsible, I thought I better go check.

I can not check though as I will probably look nosy and get my ass chewed. So as he had us trimming thistles, I went back with a tile spade to trim weeds, and used that as a cover to check on the AC cover.

Sure as hell, it was covered, but it was not running.

So I go in and inform him of the weeds and then ask if he wants the AC cover off.

He says he does not as he just runs it a little while.

I offer again in saying it is not a bother, but he says I will have to put it back on.

I start contemplating and then laughing.

Uncle can not handle the AC running, not when he is there, but when his children are, as they have it set at 68 degrees and freeze his ass off as they will not turn it off, and he does not like that.
So the excuse is he can not take AC, and the way the AC stays off and he roasts there asses off........yes they are on the floors sleeping or up in the hot upstairs, as a lesson that they can stay, do things, but they will not be running that AC and they will suffer, so they leave again.

As you can see the Cherry family has many nuances in communications, and I am amused as it is not me being shown the door or getting my ass chewed for something the kids did.

I will have to cover for him though in this, as it is his life in what he wants to do is his business in how he handles the kids visiting. I will also have to inform the good daughter that the elder son last year turned down the heat to 50 degrees, after Uncle had it set to 60 when he was leaving for the winter.
That might not sound like much, and elder son thinks he was smart in saving money as the old man is shit for brains, but the thing is that house the pipes have frozen in it. My Aunt in  town had her pipes freeze the winter before. Elder was fortunate there was allot of snow, or else those pipes would have frozen, burst, burned the water pump out, but not before filling the basement with a giant swimming pool ice cube.
I detest arrogant shit like that as there was a reason the old man did things the right way, but the kid thought he knew better, and was trying to bully the old man. It is stuff like that I will have to inform the daughter of so that something bad does not happen.


As for now, the AC cover is on. I know nothing about it, as I am not getting in the middle of that Masterpiece Theater, but it is the way he handles having the kids around. He slow roasts them so they leave.