Another Mass Murder Not Reported 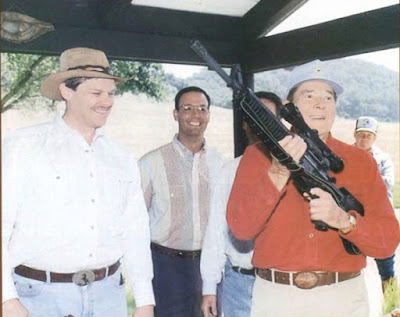 With Donald Trump joining the deconstruction of the United States Constitution and Bill of Rights in his anti gun stance, over two leftists who murdered people in malls  in Texas and Ohio, with White people for brainwashing reason, being blamed for these events, the Lame Cherry deals in perspectives.

For instance Beto O'Rourke was whining about 40,000 Americans dying from guns.......that is another fabricated number, but if 40,000 is the number to work with, then the reality is 22 people died in Texas and 9 in Ohio, for 31 people.


Beto O’Rourke Tells Trump:
Stay out of El Paso
Breitbart, by Joshua Caplan Original Article
Posted by Tianne — 8/5/2019 10:17:55 PM Post Reply
2020 White House hopeful and former Rep. Robert Francis “Beto” O’Rourke (D-TX) is calling on President Donald Trump not to visit El Paso in the wake of the mass shooting in his former district. “This president, who helped create the hatred that made Saturday’s tragedy possible, should not come to El Paso. We do not need more division,” O’Rourke wrote on Twitter. “We need to heal. He has no place here.”


I wonder why Donald Trump does not speak of White Supremacists being condemned in Planned Parenthood in racism, sets up baby butcher shops for profits in Black neighborhoods, slaughtering 3000 children a day.......again the number is 3000 dead humans to 31 dead humans, 100 times more humans are murdered in abortion clinics, but no one is making a political reality of that number.


How Many Daily Abortions in the U.S.? - Love Will End Abortion

https://lovewillendabortion.com/how-many-daily-abortions-in-the-u-s/
We use 3,000 as our estimate for the number of abortions that occur daily in the United States of America. Here's why: There are two basic sources for abortion statistics: the Centers for Disease Control (CDC) and the Guttmacher Institute .

Again visiting Beto's numbers 40,000 dead by guns. 879,000 babies are murdered in the most sadistic ways of brains sucked out, chemical weapons, bodies ripped apart by steel weapons, and children scalded to death by salt in the womb, and that murder number does not matter.

It is interesting that there are not any RED  FLAG laws for abortion providers in psychological tests, nor Mr. Trump calling for Facebook to profile abortion providers to alert the DOJ for prosecution. Just White People are being targeted for being White.


Then there is the image of Birther Hussein Obama, blaming Donald Trump, guns, and internet sites.  Then again John Hawkins was talking of the same thing from his "right wing" perspectives, but the reality is the Texas shooter was for Obamacare, so was an Obama policy guy, and the Ohio shooter just loved Obama communist organization and was voting for Elizabeth Warren.

Violence in the United States is not a reality. Most of you reading this do not experience violence nor see violence all of your lives. Violence in the United States is located primarily in liberal population centers and if those centers were not laundering money for drug cartels for Wall Street investment, law enforcement would bring safety and peace to those people too.

Barack Obama Blames Donald Trump, Guns,
‘White Supremacist’ Websites for Mass Shootings
Breitbart Politics, by Charlie Spiering Original Article
Posted by Imright — 8/6/2019 12:28:22 AM Post Reply
Former President Barack Obama delivered a lengthy response to the dual mass shootings that killed 31 people in Texas and Ohio over the weekend. He blamed guns, white supremacist websites, and President Donald Trump’s rhetoric for the ongoing violence in the United States. In a message shared on Twitter, the former president specifically called for more gun control to help prevent more mass shootings. “Until all of us stand up and insist on holding public officials accountable for changing our gun laws, these tragedies will keep happening,” Obama said in a statement,


I for one am not surprised that shootings happen and am pleased with everything Americans are subjected to on the right and left, that under the immense pressures and police state, that they behave remarkably well.

That is the statistic in this, for all the weapons possess, because they do not trust those in power, who have proven not trustworthy, Americans are far more likely to kill themselves in misery than to hurt someone else.

The surprise isn’t that we had two mass shootings in 24 hours, it’s that we don’t have many more


I can name prescription drugs killing more people deliberately by conglomerates to vaccine injections giving people cancer and aids for profits in making people sick, as additional proofs that more people are murdered by things covered up than the fakery of guns being a problem.

Monsanto in Round Up has killed more people and is still killing people, but not one word on that from Donald Trump or the image of Birther Hussein Obama.

What has been designed in this as the talking point though now is that it is a crime to be White and it is a crime to not want to have what your ancestors worked for and you earned, handed over to foreigners.
It is a crime for White People to mention this.