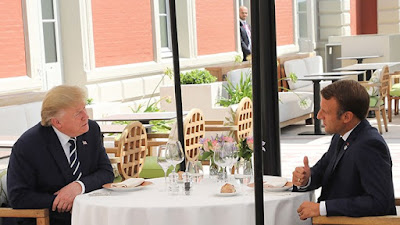 Let me just say Manny that you are pathetic.


The G7 Summit in France in 2019 AD in the year of our Lord, is Donald Trump's to lose, because he can not win it, but he certainly can lose it, and the presidency of the United States for the next four years.

Donald Trump is in France, and the problem with the French is, that everyone hates them, and the French love to be hated. It is a reward to them, in you simply can not insult them, even though they like pretending they are insulted by everything.

The G7 has started out well in Donald Trump was not hiding his contempt for Manny Macron. Everyone will appreciate hating this simp from Paris as Sebastian Kurz has been batting his ass around for a year, and Kurz is in another month about to rule Europe, Donald Trump has his last opportunity to reveal himself a global leader.

Mr. Trump has laid the groundwork in this in stating that Russia should be allowed to join the G7 again. This brinksmanship is the American agenda of Trump playing the Russian card against China. China is not helping in this in Hong Kong riots reminding everyone that Peking carves out body organs, so this leaves Donald Trump on the footing of being the reasonable one in bringing Russia back into the fold, when everyone there wants Russia in the G7 and it was the Americans under Bush Obama and Pompeo who threw them out of the G8.

The reason this is Donald Trump's G7 to lose, is because he has zero competition.

Emanuel Macron is a goddamn faggot.

Angela Merkel is an invalid.

The Italians are there in name only.

Abe of Japan is the strong horse, but has no European presence. 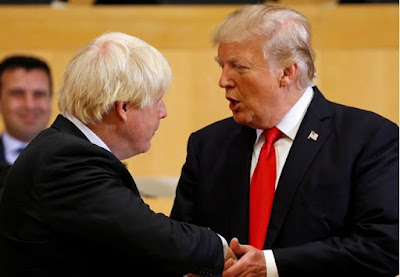 BoJo you have the grip of a whore's pussy.

That leans BoJo, Boris Johnson. Honest to God, Johnson has it in him to dominate Donald Trump and the G7 with a lucky shot of verbiage and emasculate everyone, but BoJo is still wet behind the ears, so that leaves Donald Trump as the only cock and ball act. 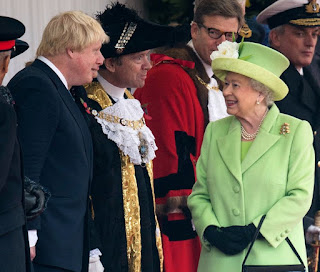 I was amused to hear your handshake Boris reminded Donald of me.


This is the opportunity for Donald Trump to grow up. He must dominate the G7 for the real reason that no one is there who is a capable leader of the White Race. If Donald Trump does not deliver, Boris Johnson will fill that shoe, and Sebastian Kurz will fill the other shoe in Europe and they will walk all over Donald Trump and the democrat who replaces him, in a future with Russia.

Donald Trump has alienated everyone on the planet, in the globalist policies of Herbert McMaster, John Kelly and Mike Pompeo. This G7 affords the opportunity for Donald Trump to briefly dominate Germany, France and England, in a catharsis with Russia, to lessen the power of the anti Christ and importantly to begin the process of Balkanizing China.
Donald Trump has made the mistake in the Mideast with Russia moving nuclear into Iran. Drawing the bear out is sound, but America has a longer plane ride to fight that war, which Russia will gain victory by holding the sand.

So it comes down to this being Donald Trump's last opportunity to keep America viable. That window will revert to Sebastian Kurz, Boris Johnson and Vladimir Putin within a month.

Mr. Trump though needs an effective policy to appeal to Europeans and Russia. He must be more than a stage act as people hating the French only goes so far in cementing policies of mutually assured destruction.