Joe Biden, your racism is calling You 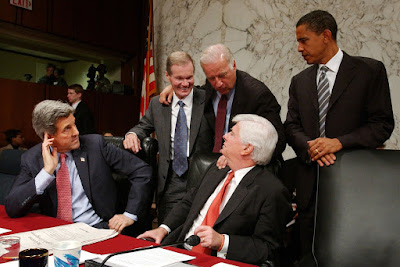 Did you hear the one about the Nigger from Kenya
who passed Oprah's brown bag test.......

He couldn't fight his way out of the bag, but he got into the White House.

The fact is that Joe Biden has always been an Irish Mic liar and fraud. He was caught plagiarizing an Irish speech during a presidential run, and his 2019 AD in the year of our Lord democratic presidential run has been an unmitigated disaster as he has become the crazy Old Uncle Joe who tells stories how he helped Abraham Lincoln write the Gettysburg address as Martin Luther King jr used to shine his shoes.

It was this latest outreach to play the race card in the 2020 elections against democrats which seal the indictment that Joe Biden is not mentally fit to be President. He is coming to the point in being mentally unfit to be Crazy Uncle Joe too.


“White folks are the reason we have institutional racism. There has always been racism in America. White supremacists have always existed, they still exist.”

Biden then states that racism exists in America, as if it does not in the rest of the world, and that White Supremacists have always existed and still exist. From a Darwin standpoint or Blackology, the Negroid is the father of humanity, so how could Negroids be White Supremacists  in if only Blacks existed?

That is what is obvious in Joe Biden says things his brain injured self has not thought through. He used to get away with these strange things, but now that Hillary Clinton is gearing up to Trump Smack Down 2, the press in trying to sink Old Joe, as Obama's image and legacy do not want this brain injured old man near the White House, Joe Biden is being exposed for the brain full of mush he always has been.

I thought I would share a series of photos of Joe Biden over the years, and in this, as Joe Biden plays the race card alienating Whites, in order to herd Blacks onto the Biden plantation, you will notice that there are no Negroids in Joe Biden photos ever.
Joe Biden had none on his staff, no Hispanics, no Asians. Yes they have appeared now in 2019 AD in the year of our Lord, but there was not any way that White Delaware was going to allow Niggers, Spics or whatever near their centers of power, and Joe Biden knew this, and he wanted to keep his Senate job so it was none of them coloured around


Here is Joe Biden in the Senate, with his best friends, glad handing Strom Thurmond, a Republican who at least had sex with Black women and fathered children by them. 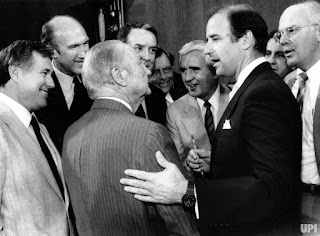 Then there is Joe on the campaign trail. No minorities allowed. 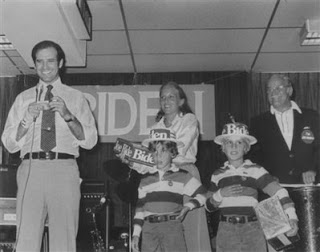 Here is Joe in the Senate hearings. No minorities on his staff. 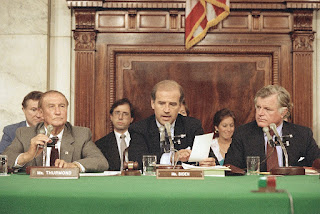 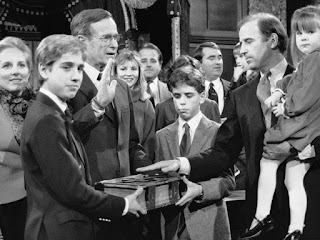 Joe Biden again sworn in, not Blacks, but a Latin dyke is allowed to give Biden some colour as he was after all around Barack Hussein Obama, so Biden had nothing to fear from White Delaware liberals anymore. 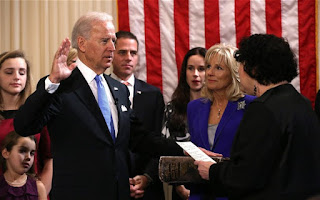 And lastly, here is Joe Biden with his trusted White folks staff, again no minorities allowed. 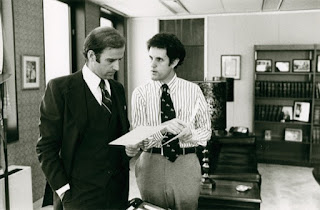 So Joe Biden is the face of INSTITUTIONALIZED RACISM, because like all democrats he talked the Equal Rights and Affirmative Action game, but never wanted any of them coloured around him. The fact is that Hubert Humphrey was the first real proponent of breaking the race barrier in the Senate. It was not Joe Biden and Biden adhered to the White Man's Club past Anita Hill.


Joe Biden's past, present and future has been nothing but racism he promoted and adhered to. He is an expert on it, and why he says the most racist things about Black people smelling clean and diners having Indians running them.
The press could make all sorts of excuses for Birther Hussein not being natural born and for Obama racism, but Joe Biden has none of that cover. Joe Biden was a horrid political candidate in destroying his campaigns when he was young, now that he is old, he is Mr. Gaff. Democrats in the new communists have Grumpy Bernie, Hair brain Joe and Hillary Clinton raised from the dead. Vegas places bets on how many of these geezers will die before November 2020 from old age.

Joe Biden is already senile. He did not belong as Vice President or one heartbeat away from the presidency.  I simply do not believe that Blacks are going to be conned into supporting Joe Biden, Bernie Sanders or Hillary Clinton as Obama was bad enough for the toe tag rate in Chicago. That though is their responsibility and the facts remain that Joe Biden when there were not photo ops was absolutely phobic of any minorities. He has always been most comfortable in racism and his family apparently enjoys Irish Mic interbreeding as his son was shacked up with his dead brothers wife, until he moved onto a South African blonde.