Kinfolk is a 4 letter Word 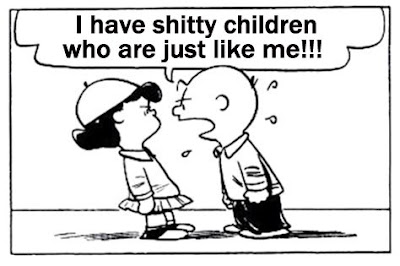 I had been hopeful a few days ago after we put in an entire day waiting around to get the Uncle's pick up fixed, because his adult children when they were here ran the wheels off of it, in his own words, that a healing could take place, as after the mother, I have had it with geezers. I just cringe around them now and just know what hell they are putting people through.

So here is the story on this bright hot sunny day. We have been doing the shit jobs, and I mean shit jobs, in I have been washing shit out of his underwear being a good Christian and all, when I noted a gate in his corral was open. I knew they had been shut by his son, probably to not have the renter's cattle up by the yard when they had their family thing, so I left them alone as what they decided up on is their decision.

Yesterday a door was open on a shed, as everyone seemed to be snooping around into everything, so I asked if he wanted it open or shut and the answer was shut, so I shut the thing.

Today I went into the house and asked about the gate and I have no idea if he was venting or yelling at me, but I heard a long rant about leaving them gates open. As I said, I was just asking about what he wanted done, and I have no idea if he thought I had closed them, but I got the word and simply left as I had enough of that kind of treatment as I had been in a good mood.

What I think happened as I saw some mud on his step, is the renter appeared, dropped some salt off for the cattle, and then stopped in to ask if it was ok that he had the gates open. I knew the cattle had been in there, but as I stated, I figured the son closed them as he is deciding all sorts of shit all the time, but all I know is I had a most unpleasant experience in getting my ass chewed for something his progeny were up to again.

I have to go over this afternoon and sort out the mower the son in law was using as an earth mover, and that is always met with from the Uncle with a sour dour face and I am to do whatever I think needs doing.

I told TL that one would think as I have his life in my hands, that he would be more civil, but that is what old people are. I am the only person Christian enough to do this, and one word from me that this is not working out and he will be in another state in days.
I will inform his daughter of the dust up, and explain what took place as I am not getting blamed for the shit those kids were doing. There is a pattern in them breaking things, screwing things up, and doing things, pissing the old man off, and then not having the sense to put things back, so things do not end up like today.

As I stated, there is only so much ass chewing I am going to take even as a Christian. God sees it all and I figure it is one more check on the list to check out time for him, as when the mother was being a bitch, things went down hill fast for her. People treat me right and things go along good, they start mistreating me and most of the time they end up tits up.

At times like these, I think of the Viking's Mom, who is thoughtful and kind, and then I think of this shit I go through and I just shake my head. I was pondering that though in I do not remember my Grampa ever carrying on like that. He just got quiet as beloved Uncle did. This must be a flaw from Gram as she was always a nasty, thoughtless, saying things which should not be said kind of person. My old man was the same mouth and temper, and I got it again today.

Odd part was we stopped in at Auntie's yesterday after picking his mail up and she was surprised Uncle could be that way. Yeah, my old man was nice to other people too, and a real bastard at home 150% of the time. So that is just the way it is, as Auntie never has chewed my ass and is better than the mother ever was on a good day.

So I am on the 'hate old people" reality trip again today. I am counting the days until he is the hell out of here. And the reason for the shit shorts washing is I think his squeeze told him to wash his own clothes, as she has been backing off big time, and is about out of the picture.

I am reminded of my other good Uncle, who when beloved Uncle died, said, "Yes all the good ones are dead now". He was a humble man who had lots of problems too, but he never pulled anything on family. That is the fact in  the good ones died and what I got left is waiting around for the grim reaper.
We will see what inquiry has to say on purr dates, and if not that, Uncle will be out of our hair and it will be good riddance.

Kinfolk. Yeah that is a four letter word.