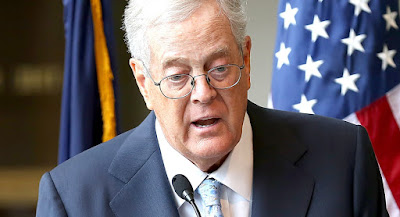 The timeliness of my death has not been exaggerated.

What profiteth a man to gain the whole world and not donate to the Lame Cherry.


Yes the celebrations will be jubilant around the John Podesta May Pole tonight on the dark side of the moon as the headlines are in joy over KOA.


David Koch, Conservative Tea Party-Enabling Rich Guy, Dead
David Koch, having a lot of time helping undermine the fight against climate change so thoroughly that it'll be a miracle if we c…

Jezebel
The problem is liberals existence still suck and they are still all going to hell.

What is really important in this is me, and my once again trying to save rich people from their doom.


Yeah all those billions are still in this world and the time comes that Dave will be answering why he did not donate to the Lame Cherry like all the rest of the richtards. Yes the bell it tolling.

Oh by the way, it is interesting in John Heinz was taken down to gain control over the  Heinz Foundation like the Ford Foundation, and Charles just joined with George Soros to take down the internet, like Bill Gates rolled over and saved his life.

I wonder if Dave was like Jeffrey Epstein in suffering from that Jew disease, of breaking their neck while kneeling from bed.......just saying Chuck is in this world with George Soros and he never broke his neck, and David is not the one who died.

Yes not much Lame Cherry aura of protection for the non donors, but then satan never does off it's own, but there is hell to pay for that soul sucker.

Let's all sing a dirge for the dearly departed, Koch on Arrival, who never did anything for me or anyone reading this.