The World a Politician Poured Gasoline Upon 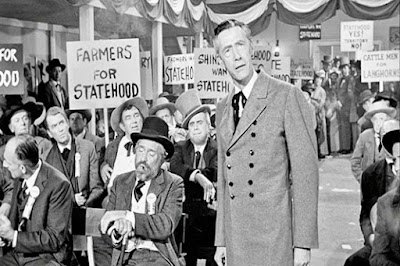 
The Lame Cherry is posting this examination of a recently generated story concerning Rodolfo Montoya, a Latin, who was reported to the police by a Imran Ahmed, an Arab manager of the Marriott hotel where Mr. Montoya was in food service.

The Mockingbird is interesting in ramping up the inflammatory rhetoric which the President has stoked the flames of using Red Flag Laws, advocating building insane asylums to house Americans accused all based upon expanded background checks, which means the regime is going to force Americans to hand over their medical records to purchase a firearm.
No other Right from voting, to typing, to being a politician to going to worship requires one to open up their medical records or forcing a doctor to report you to the BATFE if you mention you are depressed.

The rhetoric though has in the British MI6 moved this to MASSACRE, when none took place.

https://www.thesun.co.uk/news/9774834/marriott-hotel-chef-mass-shooting-weapons-rodolfo-montoya/
A MARRIOTT hotel worker had stashed a huge arsenal of weapons at his home and planned to carry out a mass shooting at his workplace, cops said. When Rodolfo Montoya, 37, was arrested at his home ...


Further rhetoric with the California police posing for the cameras has the British MI6 naming this an ENORMOUS STASH of weapons to HIGH POWERED GUNS from Bill Gates MSN Mockingbird CIA propaganda.


Marriott worker, 37, who had enormous stash of firearms ...

https://www.dailymail.co.uk/news/article-7381673/Marriott-worker-37-enormous-stash-firearms-planned-mass-shooting.html
Rodolfo Montoya, of Huntington Beach, California, was allegedly plotting to murder his Marriott co-workers The 37-year-old hotel cook told a colleague about his deadly intentions who told his ...

https://www.msn.com/en-us/news/us/disgruntled-cook-with-high-powered-firearms-threatened-mass-shooting-at-long-beach-hotel-police-say/ar-AAG8t1K
Police in Long Beach thwarted a possible mass shooting this week when they arrested a disgruntled hotel cook they say threatened to carry out violence at his workplace. Rodolfo Montoya, 37, who ...

As most of you reading this would not know a John Wayne 92 Winchester from an AR 15, the Lame Cherry in order to cut through the propaganda and rhetoric is going to expose the facts of this "weapon's stash".

In the first photo, you see legally purchased and owned firearms, with ammunition and cases.

In the lower corner are two AR 15 type firearms, and Mr. Montoya according to California law has weapon's locks on them so he nor anyone else can not just pull them out and start shooting. He is complying with the law.
There is also a revolver which has the same weapon's lock on it.

The firearm in the middle is a shotgun and completely legal, and is a home defense firearm.
None of these are "high power" firearms and this is not an enormous stash of firearms. so this is fake news. 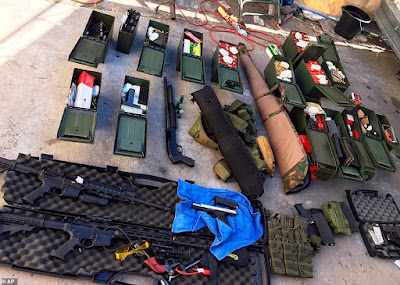 In this police photo of the enormous stash, the firearms are all locked down, legal, and  the middle one with wood stock, appears to have the action missing, so it will never fire.
None of these firearms are full automatic. Some are legal semi automatic in if you pull the trigger each time the gun will fire one shell. Others are revolvers which are of a design from the Civil War.

All of these firearms would be placed into a category of home defense, and that is why they were purchased by Mr. Montoya. 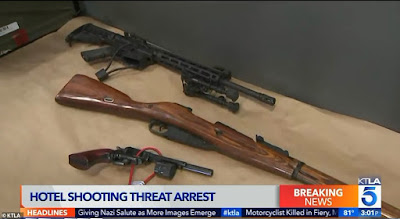 The forensic psychology of Mr. Montoya is present in this photo of the police display and reveals how the police are not interested in the facts, because if you look at the photo, there is a canteen and targets in this staged display.
The targets are clay like dinner plates and the canteen is plastic. These items are not lethal in the least. 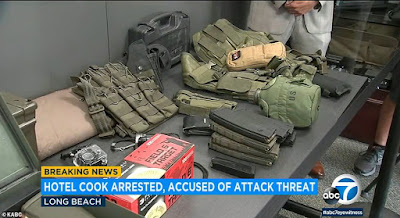 This photo is the ammunition, and for the untrained eye, it looks something, but it is not. These are  surplus military ammunition cans, which the military sells for profit to civilians as the amazing thing is, civilians find that storing ammo in these cans is a good place, just like the government thinks it is a great idea. 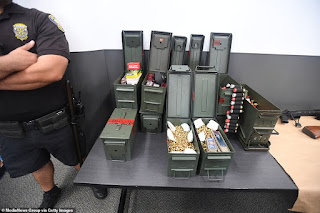 As for the quantity, there are home defense shotgun shells, pistol ammunition and in the front 22 ammunition. You can thank Barack Hussein Obama for this ammo, as he deliberately shorted ammunition manufacture in the United States by purchasing 1 billion rounds for 40 caliber pistol ammuntion for Homeland to shoot Americans with.
Civilians were put into a position to have to buy ammo in large containers as that was basically all which was being sold.
The 22 ammunition for example is sold in "bricks", which is about the size of a brick. If you saw a brick, you would think it is not big compared to like your fridge. A brick though of 22 ammo is 500 rounds of shells, because the shells are so small. So when you hear of large quantities of ammo, you can thank liberal Barack Hussein Obama creating a shortage, creating large volume purchases, and your being lied to by the media in "large" ammo caches, because people buy ammo on sale and then have it sitting around for decades, hence the need for waterproof military ammo cans.
Mr. Montoya did not have these firearms to use, as you can see by the condition all are in new out of the box state, to even the gun cases are spotless, he had these firearms and ammo in storage, like his canteen which indicates that Mr. Montoya was a prepper, someone who preps for a natural disaster which is what you are supposed to do.
I am just surprised in this fake news that the California police did not stack up his pork and beans on a table as dangerous as Mr. Montoya had them too.
For the ignorant who still would say, "Why does Montoya need all those guns and ammo?", the answer is in, why do you as a woman need all those shoes, or you as a golfer need all those clubs? It is because firearms like nail polish and pots and pans all have a purpose. You do not fry up your eggs in a turkey roaster no more than you are going to wear lingerie to the grocery store.
For protection, sometimes a small concealed carry pistol is the right choice, and sometimes a shotgun is the right choice at home. Get into a dangerous situation and desire to have a firearm, and then it would make sense to you, why you should have a choice of weapons.

What we have is a Middle Eastern manager of a hotel, without any evidence, reported a Latin to the police, who is now in jail, on 500,000 dollar bond, for being a hot blooded Latin in blowing off steam, because we do not know what Mr. Montoya actually said, because Mr.  Montoya might have said something else like "I can understand why people shoot up places when they are treated as bad as this hotel treats me". Not a smart thing to say in the heat of the moment, but a Middle Eastern ear in  being paranoid as they are, would immediately think the Latin was going postal, because a Muslim spouting things like this would go postal.

Yes this is face of diversity in different cultures in the rat hole of California are saying things that each other do not understand because of different cultures. The end result is the Muslim calls the cops, Mr. Montoya's life is destroyed as he can not afford a lawyer, will get a public defense, is already deemed a terrorist by the 500,000 bail, is on the Red Flag list, and in a President Trump world, he will be in a new insane assylum for the rest of his life, for having a bad day at work, where he  trusted the Human Resources director to let him vent, but instead had the police called on him.

None of us knows what really happened in this confidential conversation. We do know that liberal California was looking for an example and found one in a Latin whose life is forever ruined now by this, by his venting. Remember in this, Rudolfo Montoya broke no laws. He did not pick up a gun. He did not threaten anyone. He did not touch anyone. He did not make a disturbance at work. He did not engage in any illegal ACTION, all he did was talk to HR at work when upset, and the next thing he knew was he was in cuffs, was anal searched, his house was ransacked, his property seized in the thousands of dollars, and he is not working, can not pay his bills, so he will lose everything.

Rudolfo Montoya is the face of what is coming in 2020 with the Trump, McSally, Schiff new gun terror laws. For talking Mr. Montoya will be charged as a terrorist and in expanded executions will be executed as that is what Justice Neil Gorsuch opened the door for in his rulings from the Supreme Court.

https://www.lawfareblog.com/rep-schiff-announces-domestic-terrorism-bill
Democratic Rep. Adam Schiff of California, who leads the House Intelligence Committee, has announced a bill to criminalize domestic terrorism. In a domestic analogue to 18 U.S.C.

Ex wives, pissed off girlfriends and boyfriends, Muslims who hate Jesuit beaners, and just the prick down the street who hates your grandkid for being a kid, are all going to be reporting you to the police, who will have carte blanche to give you the Paul Manafort and Roger Stone treatment, while you will be looking at 100,000 dollars in legal bills, your property seized, your career ended as you will be on the Red Flag list, you will not be able to travel in airplanes as you will be on a list, and to try and  save yourself you will be like Mike Flynn in copping a plea to something you did not do and you will have a permanent record at Homeland.
The President comes to town, you post something political and the Secret Service or FBI will be on your doorstep. Your neighbors will all be interviewed as will your employer. This all projects out to the extreme in a crime was not committed, but a person was accused, without one shred of evidence, which is against Biblical, English Common and Constitutional Law.

America is entering the period of East Germany 1965 AD in the year of our Lord.

I would that we would have a discussion in this on DRUG CONTROL and the Misuse of Americans  workers abused by  corporate, as that is what fuels these events and firearms are being blamed, because the  elite want not only firearms banned, but have moved this now to firearms are the reason you are going to be arrested for legally owning them, because someone who does not like you accuses you to a the police state.

Think about all of this in it's design. In a free society, Rudolfo Montoya can not be arrested for venting nor have 500,000 bonds placed on him for owning legal firearms, because someone without any proof accused him for something. America is not a free society as this is not Constitutional Law.

It is though what American is and there will be tens of thousands of Rudolfo Montoya's in jail in the next few years as the weapon of choice in America will be character assassination by accusation of those who do not like you. 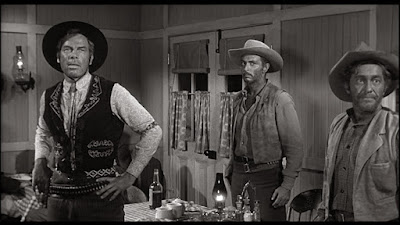 You don't like the law, well I am the law wetware and these are the lawyers who wrote the law.