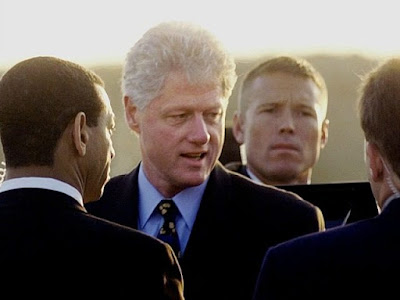 
Most Citizens have no idea that the creedo of the Secret Service is to keep  their mouths shut and to never tell the secrets of those they protect. In that, there have been stories featured in Pedo Island in Jeffrey Epstein, that Bill Clinton was along for the ride. Secret Service Agents are trained observers, meaning the detachment of Agents who accompanied William Jefferson Blythe Clinton to Pedo Island, know what was going on there, due to the fact that it is their job to scope out the entire compound and ALL the people who are there.

For the record, Prince Andrew of England was on Pedo Island. He is protected by British Secret Service, in other words, they know what crimes were taking place there, as much as Mosaad, in this blackmail island.

https://nypost.com/2016/06/25/clinton-white-house-was-a-den-of-cocaine-and-mistresses-ex-secret-service-officer/
Jun 25, 2016 · 1 Epstein had bizarre painting of Bill Clinton in dress, ... The Secret Service was convinced Hillary posed a physical threat to her husband, and even gave him a black eye, Byrne writes.

Bill Clinton Was Not With Secret Service On At Least FIVE ...

https://bigleaguepolitics.com/bill-clinton-was-not-with-secret-service-on-at-least-five-epstein-flights/
Former Democrat president Bill Clinton declined to be accompanied by the Secret Service on at least 5 of his flights with accused child trafficker Jeffrey Epstein. Clinton took at least 26 trips with Epstein according to FAA flight logs, and is now fighting to assert that he was not involved with Epstein's pedophilia. Malia Zimmerman […]


So it does not matter whether Agents were on all the Clinton trips to Pedo Island, because they were there, they heard things, saw things, and there IS a coordination of information with other intelligence agencies to carry out security operations for ex presidents.

The Secret Service knows what happened with Jeffrey Epstein as much as Bill Clinton.

For those who have forgotten, in the infamous Wikileaks emails, there is an exchange between Hillary Clinton and others lamenting the leaving of a "trained" Secret Service Agent who Hamrod and Hillary really liked. Liked is the key word in this, because this Agent was trusted in they had witnessed what was going on behind the scenes and was keeping their mouth shut.

https://sananda.website/bombshell-hillary-clinton-pedophile-sex-ring-continues-to-be-exposed-by-insiders-november1st/
This update is in regards to the private emails of Hillary Clinton and Huma Abedin found on the computer of Huma's pedophile husband, Anthony Weiner. The files in the folder named "Life Insurance" contained emails that revealed bombshell evidence that Hillary Clinton and Huma Abedin are running a pedophile sex ring. Out of the 650,000


There is an interesting side note to this story in there was reportedly found on Anthony Wiener's laptop a clip of a snuff film involving Huma and Hillary. The reason it is mentioned here is, Snopes and Fact Check deployed resources to knock this story down, and did so in a most unconvincing manner.
Most of these stories are ignored, so it makes one wonder just what was involved in this story that the forces of perversion moved to try and call it a hoax. 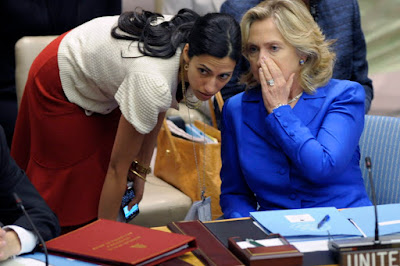 Tell them I look younger naked in the video...

https://steemit.com/informationwar/@richq11/more-emerges-about-the-hillary-clinton-huma-abedin-sex-video-there-s-no-limit-to-this-evil
Google Images. As part of the evidence seized by the NYPD on Anthony Weiner's now infamous laptop, there was allegedly a sex video involving Hillary Clinton, Huma Abedin and a minor and/or minors.


If the regime is serious about getting to the bottom of Jeffrey Epstein, there are a dozen Secret Service Agents, who are the best in the world, who have a great deal of information in this. They have to file reports. Their itineraries are set a week in advance. There have to be lists of names of people and places where the individuals or groups are being protected. There are records in this and those records have not yet been examined, in Hillary Clinton's emails nor in Bill Clinton at Pedo Island.