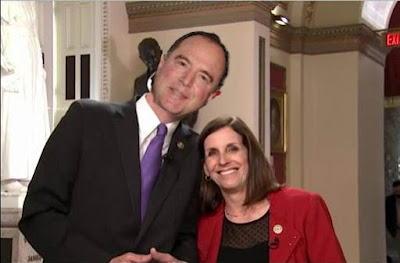 Be prepared my children and brats to be flagged as domestic terrorists, as there is a Trump bill which will be voted into law in September when Congress returns which is sponsored by that dyke from Arizona, Martha McSally and every person's favorite coup plotter Adam Schiff of California.

If you think Patriot Act was bad in destroying the Constitution, this bill obliterates the Constitution in defining domestic terrorism as speeding. For those who will not comprehend this, there is wording in these bills that if you intentionally destroy property, you are a terrorist. Speeding destroys public property in roads and endangers the public, so it is terrorism.

In pure Lindsey in the gay ear Graham definitions, it also includes saying you disagree with someone, as that is defined by snowflakes as an assault, as domestic terrorism.

The ludicrous reality of these Trump bills is it is already against the law to assault, murder or kidnap anyone. It is already a crime to attack populations to change government policy (unless of course you are Obama or Soros in North Dakota oil terror protests led by Alexandria Ocasio Cortez, then that is condoned.)

What these bills do is take crimes already defined, and makes them all federal crimes, meaning in federal crimes the statutes all end up in EXECUTIONS. For those who have waved the Flag and agreed we need to execute criminals, what if you are the criminal like LaVoy Finnicum, unarmed and out in the snow being set up by the people with guns who start shooting to murder you first?

The Lame Cherry gives you some evidence behind the scenes now in why you have been hearing stories which seemed disconnected.

The story of Justice Neil Gorsuch making it easier for the regime to execute criminals.

The story of Bernie Sanders declaring war on "White Nationalists" to destroy them from America.

nymag.com/intelligencer/2019/04/supreme-court-rules-to-allow-execution-causing-severe-pain.html
Supreme Court Justice Neil Gorsuch wrote the SCOTUS majority ruling that Missouri may execute a man, Russell Bucklew, whose medical condition would likely cause him to choke on his own blood ...

Bernie Sanders vows to go to 'war with white nationalism and ...

https://thehill.com/homenews/campaign/457841-bernie-sanders-vows-to-go-to-war-with-white-nationalism-and-racism-as
Sen. Bernie Sanders (I-Vt.) on Saturday invoked the Holocaust while vowing to go to war against white nationalism and racism if he wins the 2020 presidential election.

What the Schiff McSally bills do in Trump law, is provide the federal criminalization of Americans making it streamlined to genocide off a specific group of armed Americans, by declaring them insane, so they can be executed readily in federal custody.

No such laws exist for domestic terrorism.
Republian Sen. Martha McSally of Arizona and Democratic Rep. Adam Schiff of California have introduced bills that would provide federal law enforcement with similar tools to combat domestic terrorism. The bills mirror a proposal advocated by former acting U.S. Assistant Attorney General for National Security Mary B. McCord and former State Department counterterrorism official Jason M. Blazakis.
The McSally and Schiff bills are virtually identical in substance, and both have two important provisions. Both would create a new crime of domestic terrorism, making it illegal to kill, kidnap or assault another person; create a substantial risk of serious bodily injury by intentionally destroying or damaging property; or threaten to do so “with the intent to intimidate or coerce a civilian population, influence of the policy of a government by intimidation or coercion or affect the conduct of a government by mass destruction, assassination or kidnapping,” in the language of the House bill. The wording of the Senate bill is substantively similar. Both are derived from the current statute that defines domestic terrorism without making it a crime.
Both bills also amend 18 U.S.C. Section 2339A, which makes it a crime to provide material support or resources “knowing or intending that they be used in preparation for, or in carrying out, a violation of” certain statutes. The new provision adds to that list of crimes the new domestic terrorism offense. Material support is defined as “any property or service,” including money; training; documents; weapons; and “personnel,” including oneself—medicine or religious materials are exempt. Under the proposed law, prosecutors could charge someone with providing money, goods, weapons or services to others who plan to conduct a domestic terrorism attack.


The red alert sentence in the article quoted above is this gem as it says it all. The writer states that you will be identified as a criminal BEFORE any action has taken place. Super Patriot Act will arrest and convict people for never committed a crime, but for "crimes" that the regime will soon define as domestic terrorism.


These statutes permit investigators to identify criminal behavior earlier in the timeline, and intercept subjects before their plans reach completion.


The reason no such laws exist for domestic terrorism is because in order for something previously to be against the law in legal definitions is that you first have to commit a crime!!!


It is no wonder that Donald Trump's poll numbers are in free fall. They mirror Senator McSally's numbers in Arizona in the people of Arizona are seeing Super Patriot for the horror it is, in it will define everyone as a terrorist to be picked up like in East Germany in the Cold War.

An illegal knocks a fence down in getting into America, that is domestic terrorism. You try to influence government policy (that is called POLITICS) like the Tea Party having a rally to intimidate by numbers and Lindsey in the gay ear Graham will report you to the FBI as a domestic terrorist as you are trying to influence him to change his mind.

When this blog reported that the British were screaming for gun control, you were alerted this was MI6 meddling in US elections again. This blog informed all of you that this was not a Gun Control problem but a DRUG CONTROL PROBLEM.


You though have been lied to and no one in the Mockingbird media has told you what is coming, and that includes Wayne LaPierre's destroyed NRA. You have only heard it here and now you are hearing what is in Congress, from both parties and Donald Trump will sign this Super Patriot into law, with his super background checks which will include your private medical files and your social media posts.
The way this is stealth progressing, a law is going to appear where if you sounded depressed online, that you will be flagged for gun confiscation. For those who do not have guns and think they are immune, re read the part about your having disagreed with a politician which is the government and challenged them. That is coercion and domestic terrorism.

You now know why that Donald Trump backed Martha McSally. She had one purpose for John McCain and that was Super Patriot. She will be voted out, but it will be the law of the land hauling Arizonans to newly constructed terror camps.

Federalizing laws means federal death penalties. They will no longer have to set up road blocks to assassinate LaVoy Finnicum. The police state will be able to do it all legal in Super Patriot.