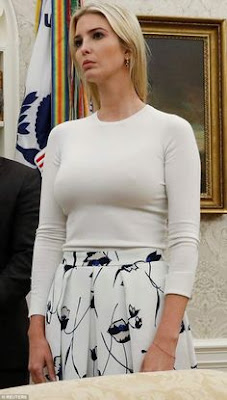 Yes my nipples are loaded,
but do not fear,
for I have passed Donald Trump's super background check

The Lame Cherry joins President Donald Trump in his broadly encompassing tweet in calling for MEANINGFUL GUN CONTROL. As a gun owner and Trump voter, I can not but help in supporting Donald Trump over gun control and look forward to Senate Majority Leader Mitch McConnell in meaningful gun control.

For example, Donald Trump as President is protected by Meaningful Gun Control. Like all people purchasing a firearm, all visitors to the White House must submit their birth date and Social Security Number in advance.
From this a background check is conducted by the NCIC National Crime Information Center and the NLETS, National Law Enforcement Telecommunications System. This is what the BATFE does for all gun purchasers for the balance of the protection of rights and security in the United States, because the reality is, Donald Trump can not have people like Jared Kushner banned from the White House, because he and his family were selling influence, on that knowledge alone, but they Kushner's would have to be charged first, before they were banned from 1600 Penn Avenue.

See the Lame Cherry is all for meaningful gun control, because what the President is advocating is obviously the end all for protecting Americans, as no one will ever be able to purchase a weapon who should not have one. This will be Donald Trump's super background check.

In that, Donald Trump with Nancy Pelosi and Chuck Schumer are going to have a system in place so absolute that when Mitch McConnell and Nancy Pelosi pass legislation the President will sign, what will be included is a complete ending of the 1968 Gun Control Act.


I see this as more rights being returned to Americans like the good olde days before the 1968 Gun Control Act. With the Trump Super Background Check, people from California to New York will be able to order their guns from anyone. Ebay will be tied into the BATFE, so widows can sell their husband's firearms to people who in winning bids will submit the form to the Trump Super Background Check and in 3 days have those lovely tools of liberty and justice for all.

This is what meaningful gun control is, because in what the President is advocating, it means that people who are cleared to own firearms, are completely safe and can purchase guns from anywhere, in any quantity as the BATFE has the forms, and having completed the checks, it will of course actually MAGA, as the spike in firearms sales will balance the budget.

Think of it, in ordering a wonderful Saiga rifle again from Russia. It will balance the trade of America. It is just great economics and we all should be grateful that Donald Trump wants meaningful gun control, as his thorough check will mean people are pure as the driven snow, and it will no longer be necessary to have any of the antiquated infringements which have obviously not worked.

But now it will all work out according to President Donald Trump's meaningful gun control.

I can hardly wait until I can start direct ordering Rossi  Winchester 92 rifles in mare's leg, like Steve McQueen had from Brazil at reduced prices, and of course the Trapper model of a short barrel, as I will have passed Donald Trump's super background check.
Hell, when the rich people donate, I will be able to order me up a Thomspon Submachine Gun, an Ma Deuce and maybe a howitzer, as Donald Trump's super background check will have proven that I am completely safe to own anything I want as long as I have the cash to pay for it.

As nuclear missiles are arms, maybe with a big donation, I will order me up a Kim Jong Dun missile  from North Korea as he is Mr. Trump's friend, and what could be better than some terror state like Iran, having to face like 1000 nuclear missiles from  the backyards of Americans who have passed Donald Trump's super background check.

It is too bad that Wayne LaPierre of the NRA can not take credit for any of this, as a deep stater he ruined the NRA and has been shoving his cock into little intern girls paid for by member donations. None of that matters as the NRA will no longer matter, as it will be everyone owning firearms after they passed Donald Trump's super background check.
I would that others had thought of this before, and we could have stopped all of this CIA mind triggered shooters, as Donald Trump's super background check would have solved all of this and saved America.

I can hardly wait to get Ivanka Kushner waving me through with the red flag so I can start buying guns online, around the world and from dictators who the President likes, all due to Donald Trump's super background checks.

https://www.upi.com/Top_News/US/2019/08/09/Trump-on-meaningful-background-checks-I-really-want-to-see-it-happen/5671565364506/
Aug 09, 2019 · Before heading to his resort in New Jersey Friday, President Donald Trump called for meaningful background checks for gun purchases -- following what he said was a "great talk" with the top two