One Wheel In The Grave 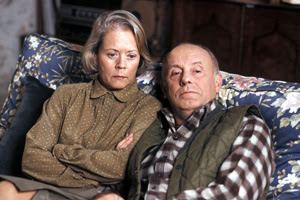 Yes that one God did in by an in grown toenail...

This is a continuing lesson in the Vengeance of the Lord in I tell people to not screw me over on this blog and in life and they always smugly think they can get away with things. I always tell Christians to never act out as that is not what God teaches, and it will only get you into trouble. As a matter of Faith, I relate this reality of God avenging me.

When TL and I came back from the metro, I posted here about a real asshole who ran an agribusiness concern, whose workers had torn out out fences with a sprayer, two years in a row.
I was furious the second time, as we had put cattle in that pasture, so I emailed the guy demanding they pay for fixing the fence.

This asshole smugly wrote back, that he had checked the GPS, said he had records showing nothing happened, so he was not going to pay for anything and there was nothing that I could do about it.
What I did do is take it to God and fumed about it for some time.

So fast forward this five years, and we are in town, and enjoying ourselves in we like to go to garage sales. We stopped at a place, and in discussing things with the woman who was there, soon discovered that her husband was in a wheelchair, had stroked out, and they were selling things. It had all happened just before their planned dream retirement of moving out of state and enjoying the good life of endless nightlife.

See this is my kind of Holy Ghost reckoning. Dying would have been too good for this SOB. He is now locked into wheelchair. His wife is pretty and vivacious. She is going to be going out and living life, and she is going to be in the wheelchair.  Life is going to be adventures, and he is going to be in a wheelchair.
His best days are behind him. He has stroked out. He will require meds in blood thinners for the rest of his life. He will require two years of hard therapy to try and get back anything, and he will still need a walker which of course means he will be falling down and compound the problem as geezers fall.
This prick is locked into a world where he will not get to enjoy retirement, but be tortured in it as his wife gets fed up with the geezer in the chair, and will hope he will die after she meets some younger guy who has legs and a pecker that work.

This is how thorough God is. He did not require this fool's soul, but just his body  and nothing is sweeter than this kind of prison in a person can not flee themselves.

Of course I pray this leads to his repenting, as this bastard has been a shit head to everyone for years in business, so he has acquired a heap of bales in the straw which broke the camel's back.

I know it is hard for Christians in you have people hurt you. You see them living the good life while you suffer, but if you look at the above, God timed this absolutely perfectly to the lead up to his retirement and then took it all away from him.

A couple of hundred bucks and an apology and dude would be preparing for his retirement as they planned. Seems like a little amount and it is when he just paid with his entire golden years.
What is the price of a man's soul? Yes, what is the price this prick would now pay to have his legs back, to have his golden years not diaper stink shit in a wheelchair?

Maybe most of you reading this are too timid to deal with this. I realize I am a bit different in God's Prophetess category as these are realities that most people would feel guilty about. Not me though, as that is why God works through me and God works for me, as I have Righteous Hatred, and I do not gloat over God hammering our enemies. I delight in it, as they struck me first without cause, and thought they could get away with it, when God has a record and God does repay in the most complete sort of ways.

As I have stated, it is hard, as I have been through this before. There are still some heinous people I would were tits up. God though is Faithful. That evil uncle I had, it was more than decade before that fat frick died, but oh what a wonder God performed on him, in locking him into his fat body, putting him on oxygen and then sending him to hell, as his wife called me up begging me to come to the funeral.
TL and I both experienced him at the grave. He was just this hulking, confused stupid, still angry and now there was nothing he could do about it, as he was locked in death just like dude in locked in a wheelchair.

I know the enemies I have in God all have their worst outcome manifesting. It will strike and God will do it at the best of time for a most perfect vengeance.

This is the Christian Spiritual Reality. One day there will be the Last Days, and all of this evil will have God's Wrath poured out on it for destruction, as that is what the Great Trouble is, a reckoning. For now I am most pleased for this Gift from God, as I had no idea when TL mentioned this address who lived there or what we would get a front row seat for in the most delightful avenging by God.
I was walking on this guys floors, his property, and singing Praise God inside as he was locked in a wheelchair looking like death warmed over and no one was paying any more attention to him, than if he was a mite infested chair.

God will reckon with His enemies that a Christian has in Him. It is absolute, certain and it will be God revealing that action to you for His Glory.

All Glory to God!!! I plan on unloading on that for a number of rotten souls who think they are getting away with things, but they are already numbered as ended.


I just had a beer praising God over this. Know I will have a beer in God locking you in too.