The Next War Already Fought 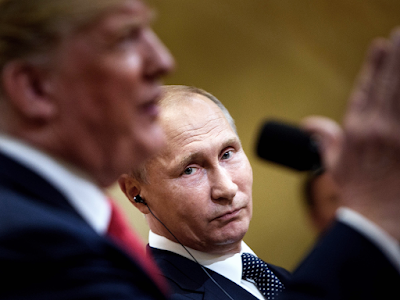 Have you seen my world Donald?
It is spelled MINE.

It is ridiculous to believe that an army of sticks will ever defeat a military at war. The Germans used subterfuge with effect in "dummies" with guns to draw fire from Russians, but the fact is that it was the Landser which won and held  territory for the retreat, not fiction.

That is the problem with the terms Cyberwarfare in relation to propaganda warfare as Colonel Edward Lansdale and the CIA as of late have employed in Mockingbird. While it is proven a powerful group can bring a population to discontent, discouragement and disaffection, it was not Russian bots which created that in Americans in 2016 AD in the year of our Lord. It was the actual conduits of International Socialism in the rapine of the Nazi conglomerates which led Americans to revolt on the left and the right.

In that this is the examination of Hybrid Warfare, which is not warfare. It is not even deception, but the reality of Nazi propaganda pointing out the facts which peoples in the West are already aware of in they have been betrayed by their regimes.
The infamous Christchurch New Zealand manifesto was prepared by MI6 for distribution on a mass casualty event, which Americans triggered by the reality that their Lost 10 Tribe identity is being replaced by the Wog, is the Tavistock ruse. Make public by a lunatic, the very operation which is being engaged in against the native peoples, and then discredit it as White Supremacy, in order to criminalize the very discussion of that reality.

“[Russian President Vladimir Putin] is sufficiently in contact with reality to know that he will fail if he attempts to regain anything approaching conventional military parity with the West,” note the report’s authors. “Putin has every reason to believe that outright confrontation with the American military will end badly for him.”


With Russian moving in to Iran, Russia has gained the real submission of the United States, which has been brainwashed into massive firing systems of technology, when wars are won by the absolute which Moscow is preparing the battlefield for.

In a potentially catastrophic escalation of tensions in the Persian Gulf, Russia plans to use Iran’s ports in Bandar-e-Bushehr and Chabahar as forward military bases for warships and nuclear submarines, guarded by hundreds of Special Forces troops under the guise of ‘military advisers’, and an airbase near Bandar-e-Bushehr as a hub for 35 Sukhoi Su-57 fighter planes OilPrice.com has exclusively been told by senior sources close to the Iranian regime. The next round of joint military exercises in the Indian Ocean and the Strait of Hormuz will mark the onset of this in-situ military expansion in Iran, as the Russian ships involved will be allowed by Iran to use the facilities in Bandar-e-Bushehr and Chabahar. Depending on the practical strength of domestic and international reaction to this, these ships and Spetsntaz will remain in place and will be expanded in numbers over the next 50 years.

If one examines the map of Southwest Asia, the reality is plain that Russia has a land, air and sea bridge to Iran. The United States  has no such reality.

From the Iranian position, the Russian forces extend in warm water  ports into the Indian Ocean. Africa is of not any consequence, and in the east, China is in direct control with a few small pinpricks of Japan and South Korea as the only American allied presence. This is control of sea lanes which is trade.

Trade is old warfare, not hybrid warfare  and the United States in trade is being cut off.

The same is true in the warfare of position. On the Arabian peninsula, the American allies are isolated. Iran is attached to it's allied forces of China and Russia by land, and this is where war comes down to it in it's preparation as Russia has engaged in.

The above statement says it all. Russia is preparing for a 50 year strategy. That is in effect the year 2070 AD in the year of our Lord.

What will the world look like before that time? A Great Eurasian War will have taken place.

China is in the process of population implosion by the year 2040. She will have to fight war by that period to try and cripple the United States and drive America from the Pacific.

Islamic lands are breeders, and in this Russia's population is in retrograde, but  it is a pure Russian genetic strain. On the contrary, the United States is by the cartel engaged in the genocide of the Protestant Caucasian, it's most productive at war and industry, leaving only the mongrel class.

The cartel which rules in the United States believes that the tan skin population can be controlled, and used as war fodder, while a cywarrior class appears as machines. The problem with this paradigm is it is untested,  as to whether robotics can indeed manufacture and repair themselves for a long period war. A robot knows how to "I'll be back", but a robot can not have the ability to complete all features of a technology restructuring in from mining rare earth metals to making moulds in a kiln.

In this Russia, matches up with it's population of tan skin fodder in checking American firepower. Russia is capable of strategic repulse and survivability of it's core population, while America has no intention of that policy.

This then comes to the Russian position on the board. Moscow will control area, and areas controlled are areas which require great expenditures of resources from the West to retake those lands. The Soviet Union expended 10 to 1 to drive Germany from Asia. It will require at least 5 to 1 to drive Russia from the region, and it will require nuclear and biological weapons to deal with China when she comes over the Khyber.

In any of this, then comes the real thrust in WMD terror against the United States in order to cripple that power. There is not an unknown formula in this, as two world wars in the 20th century produced world war and they were crippling the economy, a domestic upheaval of diversion, and lack of war preparation. for the war to be fought.
The United States in positioned on  all of these fronts, but in this coming war, this time the International bankers  do not require an America to win the war, as America has already been looted.  The real purpose of this will be to stalemate America into submission, and then loot her resources and technology.

In the next war, America will be looted as Germany was in two world wars.

So with that backing Vladimir Putin is in position  to not project Russian power into the world, but to keep America from winning a next war, and that is what winning the next war will be all about.  America will not have the resources to deal with the Eurasians, as the war will be victory on the age old maxim, not of who rules the internet, but who has control of the land, sea and air. Russia will hold the land and sea, and there is nothing that space or air power will be able to do, to dislodge Moscow from that dominion.

Russia is an active conduit of the age old bankers and Vatican. Russia is the perfect projection of power for them in a 2070 AD in the year of our Lord world, in she can take land, but not hold Europe. She can hold land, absorb strikes from America, and win by holding the land.

Once again in the United States, brains which are too genius are stroking their orbs in how wonderful they are in new terms, while not factoring in that Cyberwarfare is nothing but another looting manifestation of the financiers in being costly in high taxes, which control the population by enslavement debt.
Russia does not engage in any of that. Russia instead trades it's warships for Iranian natural gas in hard assets, having expended not one life nor one coin in taking Iran, as Iran invited them in. The bribes of the United States for positions though are manifest in bankrupting the Americans.

Russia is already engaged in the next war. If it is not fought, it holds the position crippling the United States. If the war is fought, from that position America will not win the war. The only mistake Russia would make is to invade Europe,  exposing her forces to American WMD. This would deprive Moscow of her necessary walls to keep America at bay.