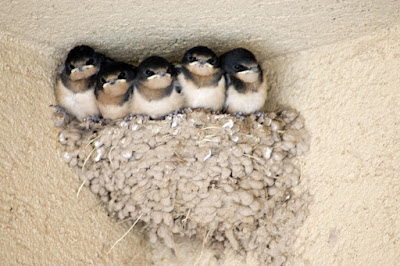 As I type this, there are lost souls shooting up malls, because they have their American Dreams shattered as in Texas or as in Ohio, a democracy thug does not want to wait for ballot boxes and his bullying is that Obama Stalin change they believe in.

I do not give a care about any of this, as it is rehashed vomit and does not effect me in the brier patch, as I am not stupid enough to reside in metro areas where this trash exists.

What concerns me is swallows, and the study of the domino effect, in how all things are related and how guilt is generational as God teaches, and this is the story of the swallows and how I got stuck with the assassin deed.

See on Memorial Day, Uncle's sons appeared unannounced as the elder wanted a beer drinking weekend away from his ball and chain. Apparently his namesake wanted a ready made family of a 3 dumpster kid hoover unit which has caused rifts in that outfit.
The other son, the good one appeared, being younger, desiring to do good deeds for his dad, but was in trying to get along out voted with the beer drinker, who wanted to sleep in daddy's bed and pretend he was the reincarnation of his uncle.

So they came and went, and their dad and my Uncle appeared. He gets let down a great deal by most of his children, as they can not be grown ups and blame him for their being culls.
So the good son tells me when they leave that when the swallows are done nesting on the porch to take that nest down, which I did. He had a good heart in letting the babies grow up. No doubt from experience in his hard life in wanting to protect the young.

So I do that, and get my ass chewed for something the elder brother did, and I don't say anything, but ask Uncle if I can do a few things around there, like take down another nest where swallows are shitting all over a door in the garage. That is vetoed like two other things I mentioned. The veto is because Uncle is trying to gain some control over his home again, so I am hands off in things, as I notice another swallow nest going up on the house.

As I have been told, I note it, and as his daughters are coming, I figure that is their problem to get shit on. When we return after my manipulative sister made an appearance,  the nest is still there, and I figure maybe I can put some cardboard down to keep things clean.
That is when the pronouncement comes in I must now take down that next. Yes after they have babies I get to be the assassin.
That really pissed me off and I talked to God about it. Like when the place is our there is not going to be any swallow drama. The Holy Ghost is working things out though, so Uncle is still there, and the Holy Ghost says, "Say put them  babies in another swallow nest".
I think that is a kosher idea, but when I check, the little guys have just hatched literally, with one egg still incubating. I find the nest at the garage door though has eggs in it, so in the chicks and egg go and I put it into God and Holy Angel hands as I have done all I can do.
The adults should feed the new hatchlings, and they should incubate the eggs, so it should work. I have seen like 6 to 8 little ones in nests so assorted sizes should work, and as I said, I did what I was told as this is not my place yet to buck the Uncle and I did what God did as in His plan Uncle and the unclings trump swallows.

I am trying to help heal that family, but this all pisses me off as you can see the chain of events in this. The elder kid shows up, having no intention of doing what his father wants, and then he with the elder sister do things to get my ass chewed and make Uncle feel disenfranchised on his own place, and it all spirals out in me trying to head things off, being told no, and then who ends up suffering in all this power grabbing but innocent birds.

I know Uncle felt bad about the little ones, but he passed the buck to make me the killer. I just pray the guilt gets him to sell us the place.

It is though a revelation in cause and effect of selfishness, as this entire family has been blaming each other for shit others have done, none of them have taken responsibility, and it is just a cancer that keeps harming the world. I have had nothing but major headaches since they appeared in me fixing things I had fixed that they broke.
As I mentioned to Paul in a letter, the oldest daughter was leaving me lists, the younger one did too of things I had to do. The oldest one said the father got ornery and she made him say PLEASE and I was to make him say that too.
Yeah I am going to humiliate a guy in making him say please when he is pissed off. What we have done is be patient, build trust and do what he tells us to do immediately. That has worked out and he smiles at us and is glad to see us. We are at least the son he never had.

I do a great deal of cussing on drives over there as I vent. Like he was looking forward to the last visit from the youngest daughter and kids as she was supposed to cook for him.
When we returned, the first thing I was told, "She made tacos and I don't like them". Then he was out in the kitchen digging through things they left in emptying his fridge as he could not eat the shit.
So orders were we were to fry chicken, which we did. When we arrived he was eating mac and cheese and refried rice which he can not eat as things back up on him. No wonder he can't shit, has stomach problems and is pissed most of the time, because the kids do one thing and piss him off two other ways.
All he wanted was a good meal, and they bought prepared chicken which he gave to us, as it stunk, was full of spices and he was not going to eat it.

and who gets the short end? Swallows just trying to eat mosquitos and stay alive......and me of course in being frurstrated by this stuff.

His middle daughter is a good girl. She looks out for him and he likes that. What she and the younger son do though, is like putting fingers in the dike, as the deluge of the others is enough to wipe out families. I thought first that the two children who were not around were being disrespectful, but they are so screwed up, it is a blessing those tards are not around to hurt this guy more, as the three are doing a great job of pounding him.

It all interconnects though. It is though why TL and I try not to be like our parents. It is as my cousin said to me this past month in his kid was whining about what a shitty life he had. He said, "We all have shitty lives, but you can't sit around whining about it. You got to make something for yourself and not repeat the mistakes". That is sound life advice.

I know it is different when it is parental wounds as it is too close. It was hell with my parents, but we did the right thing. It was hell, but we did the right thing.
With TL's parents who appeared thinking they were going to bully us, our approach was simple in we just told them to "Get the hell off the place".
As I said, I know what it is to have wounds in things being too close.

I though have to keep my mouth shut in not chewing people out for him. I have to turn to God and complain and thankfully He gave me a way out, so it was not me stomping on baby birds to end them. I have my illusion and plan to not look too close at that nest when I am over there so I can keep my illusion.

It is the lesson though of how things are interconnected in things suffer. A kid wants to punish their old man for things they think were done to them. He has to vent and takes it out on me. What gets hurt are swallows along with me, but some place in this it has to end so I absorb most of the hurt and try to keep things settled.
Uncle has faults as most do. He though is a good man. He carried alot in life and if he is treated right, he treats you right as most people will. He is a cake walk compared to the mother who was hell on wheels. It is not forever, and it is a point that we are going to do Christian good in this. When it is his good daughter, his good son, and us interacting with him, things are settled and he is happy. When this other stuff disappoints him and hurts him, that is where the spiraling out of all things harmful harming other things begin.

It is a life fire exercise in what life is. I see the worst of people and my manipulative sister is of course allied with the worst children, as like satan she tells them she agrees with everything they are up to which is harming the Uncle........so she sees him more vulnerable and is easier to exploit. God is seeing this and her reckoning is coming, but this is apparently a season where they are getting their last chance for Heaven and healing here and the swallows and me are the ones getting the live fire.

No one ever thinks everything is this connected, but it is, and they are responsible. The fact is no good deed might not go unpunished, but the fact also is no good deed ever keeps festering in an endless chain of harmful events.