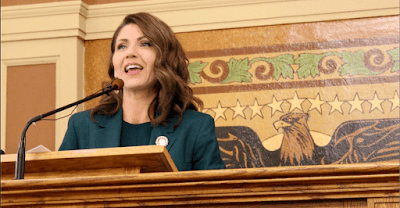 If America survives as a Race, it will be in the enclaves being created by the last Christian Americans like Governor Kristi Noem of South Dakota.

If only America had elected a Governor Noem in 2016 AD in the year of our Lord.

Rapid City, S.D.—Students returning to Beadle Elementary School in Rapid City will find a squeaky clean new gymnasium floor, tall sunflowers in the community garden—and the motto “In God We Trust” painted above the scoreboard. They won’t be alone. Students in each of the Mount Rushmore State’s public schools will see the official national motto, which supplanted “E Pluribus Unum” by congressional action in the 1950s, posted on school property, complying with a law signed this spring by Gov. Kristi Noem.(Snip) The new state law requires the school display to be bigger than 1-foot-square and located in a “prominent” location.


And this Republican Conservative is on the radar of the cartel bent on ending the United States, in they detest her from the CIA run KELO media there to these disgusting  anti Christian means full of racism against White People. 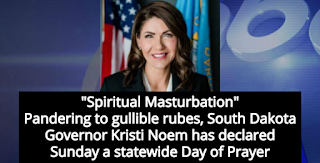 Instead after the deliberate market drop of Wednesday August 14th, 2019 AD in the year of our Lord to begin another round of money laundering by the Federal Reserve for Wall Street in more American debt, our President was phoning up the Nazi conglomerate leaders in what needs to be done to "save America" and the CIA deep state Washington Post has provided the brainwashing in capitalism needs to be reformed.


Corporate panic about capitalism could be a turning point

“Evolve or die,” wrote hedge-fund billionaire Ray Dalio in a manifesto published in April titled “Why and How Capitalism Needs to Be Reformed.” With each passing month, more business executives have been joining this unlikely crusade to save capitalism from itself.
The loudest reform call yet from inside the system came this week from the Business Roundtable, which represents the chief executives of 192 of the nation’s largest companies. Most of its members signed a statement declaring that making profits for shareholders isn’t a corporation’s sole responsibility. Instead, companies have a broader mission to serve customers, employees, suppliers and communities, too, the statement said.

And what kind of reform is necessary? Why the answer is provided you in Franklin Delano Roosevelt's plan. You probably may not be educated in this, but here is what Frank did.

Frank kept the Great Depression deepening like Obama did for his Marxist policies, and in that Franklin Roosevelt expanded the State control of industry that Woodrow Wilson began with Herbert Hoover for war production.
There is a word for State run industry and that is National Socialism or Nazism.

Calm, reassuring, Roosevelt saved capitalism by reforming it, redeeming his campaign pledge to “the forgotten man at the bottom of the economic pyramid.” Who in the current Democratic field can claim this role in 2020? The ground is ready. Even the moguls know it’s time for change.


For a review in this, Birther Hussein Obama, realigned all of America deliberately to be centralized into seven major conglomerates.

Now a deliberate constriction of the economy is being plunged again as in 1929 AD in the year of the Lord just like with FDR, and the cartel Mockingbird is telling us that the American system, Capitalism has to be reformed just as Franklin Roosevelt turned America into a Nazi economic state.

Yes the veneer is once again in this for the poor little American, who is the poor little American, because these nation rapists have been importing Visa Vermin to replace Americans. So the cover for this, is not the reality, in the conglomerates have been raping the American system in FDR's Nazism, which has now been centralized or community organized in 7 conglomerates sponsored by the State.

No one voted for this in 2016 AD in the year of the Lord in Donald Trump, and this is who Donald Trump is now taking advice from in a bunch of crooked oligarchs of the Obama FDR nation rapists.

Your best chance of survival is the American enclaves. The problem with this is, these remaining states are being flooded by beaners, and all of those assholes from liberal shit holes like California and Colorado who are fleeing to Kristi Noem States which are dwindling in numbers.
You are going to be looking at corridors in America, of the Great Plains, the Hicklands of the rural areas of Western Pennsylvania, Ohio, Tennessee, Kentucky, into Arkansas.

The Vermin liberal expanses will collapse and robotics will replace the Vermin. All bets are off with cataclysms from meteors to nuclear terrorism. It is then the enclaves will survive by God's Grace.

Governor Kristi Noem is what the American remnant will survive by in the groundwork she is returning to America again. This is not MAGA, but MASA, Make America Survive Always.

The leadership of America is shifted to the States in their Rights in the Constitution. Kristi Noem is the future of the United States.