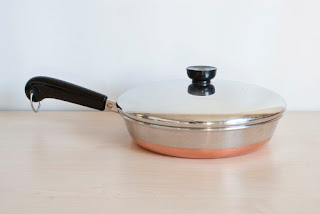 Today I had an interesting reality.


I was in the Thrift Store and the stinker Trump Visa Verm were there. They stink as they are not just repulsively ugly, but because they refuse to shower after pulling on cow tits. A Mexican stinks of milk, antiseptic wash and lack of hygenics.

So there was this little egg pan by Revereware, which I have sworn of purchasing now unless they are a quarter, as we have a beautiful set we have worked on for the past few years for under 20 dollars. Pretty good for 400 dollars in pans.

I picked it up though at 2 dollars as it was cute and made the rounds and ended up by TL and this old woman and I was being playful, so I said to TL, "See if I had not rescued this pan it would be on it's way to Mexico".

The old folks turned and looked at me and smiled and then turned away, looking at the beaners and frowned at what I said  or her displeasure at the Mexicans, as he was a sour old bat. I found it funny though that I could make her laugh at things all are not supposed to be laughing at, but as Monty Python would say, "Being racist is fun".

I like this pan but I doubt I will have any use for it, as they take lots of oil to not have a wet egg stick, but this was a little gem  that I had no idea even existed. We have now a 15 inch pan, 8 inch, some 5's and now this little gal, the kinder of pans.

We now have a stack of pans, roasters,pots and kettles and they are thee most excellent of quality. These are unique, as I have noted lesser quality items are now appearing, which I have zero interest in. That part makes me sad as a window is closing in a dead race of Americans who are now in the 80 to 90 range, having acquired quality pans etc... are dying off. This American equipment will not become available again for a generation, or in other words, the world will have ended as we know it and passed completely away.


I will attempt using our kinder gem soon enough, but it bothers me that an old woman has no one goofy like me to make her smile and then her hostage situation overpowers her world and returns her to sullenness away from the joy little pans bring me.