When a City creates a Mass Murderer 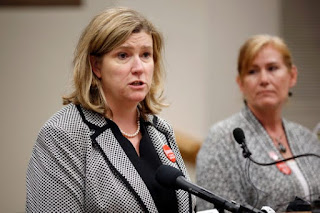 Just a note to the frumpy Dayton mayor, Nan Whaley.

Nan, you have been leading Dayton since you were 29 years old. You have been in power since 2005 which is 14 years

During the entire period you were in power, you had Connor Betts in your community who was terrorizing and terrifying women from holding them hostage in cars to telling them that he  wanted to hurt lots of people.


Nan, you were in Dayton government. No one in the Dayton school system, no one in law enforcement, no one in your community, told anyone about Connor Betts and your law enforcement never noticed this mentally disturbed leftist was bullying women.

As Michael Dukakis once stated, "The fish stinks from the head down".

You have been in power for a decade and a half, and are a reflection of what is Dayton Ohio. It is voters who vote for someone like you. It is voters who puts into power a woman, who places into power political appointments like Chief of Police, who hires officers who are conditioned to not deal with a Connor Betts in ignoring him as the community chose to ignore him, or making excuses for a leftist madman.

Nan, Connor Betts was one of your who supported and voted for the same people you do.

The Dayton Daily News reported Monday evening that the gunman who carried out a mass shooting early Sunday morning “definitely leaned to the left” politically and had talked to friends recently about shooting up local bars. On Sunday evening, Breitbart News reported that Twitter had suspended an account reportedly linked to the shooter. The account had tweeted in support of socialism, in favor of Democratic presidential candidate Sen. Elizabeth Warren (D-MA), against President Donald Trump, and against Immigration and Customs Enforcement (ICE). In a new report, the Dayton Daily News confirms that the shooter, who killed nine people and wounded over two dozen, was left-wing —

This is your responsibility Nan, because Donald Trump, the FBI, the BATFE, can do absolutely NOTHING with a Connor Betts, because no one in Dayton filed charges, no one in Dayton intervened, no one in Dayton arrested him, so that the Courts would produce a record of this Daytonite, so that the Courts would order psychological testing in order for his criminal and psychological actions would have stopped him from purchasing a weapon.
An AR 15 was not the problem in Dayton, the problem was you Nan, and your voters, who produced an entire system which thwarted federal background checks.

Nan Red Flag laws would not work in Dayton with Connor Betts, as women he knew he was threatening to the community, did not report him to law enforcement.

Nan, your passing the buck to Donald Trump in your blaming him, is negligent and a cover up of your absolute lack of leadership and your enabling a public for votes, which is not adult enough to police itself. You, Nan Whaley are the epitome of what is the failure in all of this, because your Dayton created Connor Betts, enabled Connor Betts and produced Connor Betts, and when Connor Betts acted out what he had been conditioned to in Dayton, you go political in trying to blame a President and a Nation for what your actions produced in violence.

This is your responsibility Nan Whaley. The buck stops with you as the blame begins with you.


Dayton gunman Connor Betts had an obsession with violence and ...

https://www.cnn.com/2019/08/05/us/connor-betts-dayton-shooting-profile/index.html
Aug 05, 2019 · The gunman who opened fire in Dayton, Ohio, this weekend had an obsession with violence and mass shootings and had expressed a desire to commit a mass shooting, Dayton Police Chief Richard Biehl ...