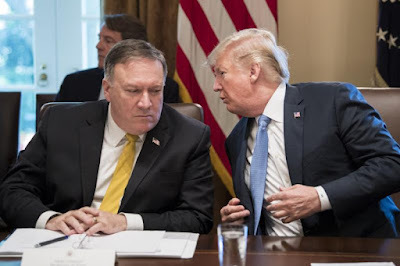 Ivanka likes playful spanking to get her to do things...

I live in a plus minus world of definition. Either you are good or you are evil. Either it is night or day. Either it is for or against me. That is the reality of Donald Trump, because by his chosen actions, he is either one or two things as he enters the election cycle of his second term, in either he is a Colluder with the deep state or he is a Coward bowing to the deep state, as MAGA has vanished,  and his court picks are Gorsuch fags or Kavanaugh womb exterminators, as nothing has changed in what Donald Trump promised, and in many ways things have gotten far worse than under Obama.

For those who do not want to examine this and exist in their Trumpian theater of Twitter  Smack Down of WWE again, the time to figure this out is now, as the election will be stolen for Donald Trump, but if Donald Trump can not offset the Christians he has driven off with his Nazi party assimilation of enough blacks, fags and racist democrats, he will not have the 15% to ward  off the communist the democrats put up, and then you will be facing the bastard of Obama Marxism.

I have made no hidden agenda about this, in I have informed all of you that TL and I will not be voting for Donald Trump, because he is either a Coward or a Colluder  of the deep state. I don't blame Donald Trump for saving his own ass and hanging mine and other Americans out to the American Genocide, as what would you expect out of a New Yorker.The simple fact is Donald Trump is Obama's 3rd term. 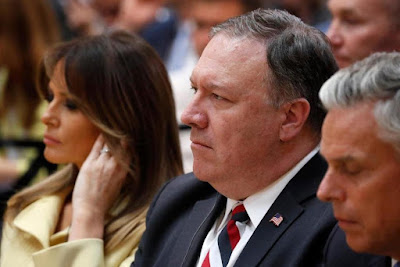 
Donald Trump by not removing the economic siphon of Obamacare, Obama high taxes and Obama high energy, removed in 3 years, 9 trillion dollars from the American economy again  for the Nazi conglomerate deep state. That is Donald Trump funding the deep state, and his latest budget, after robbing American for more 9 11 welfare to people who have already received billions, is the reason MAGA is dead in economics, and why you are not better off than under that scoundrel Obama.

As stated, Trump is either a Colluder or a Coward or a great deal of both, as he is too weak and feckless to actually get a Reagan deal with Bill Casey. In fact, the creepiest part in this, is that liar Mike Pompeo has stated he wants Donald Trump's seat in the Oval Office. That has balls as Donald Trump is warming that chair for Ivanka.
For Pompeo to do that throw down, pisses on Mike Pence, and it reveals why in news stories it is listed as Pompeo and then Mike Pence.........see the deep state is at work, and the work being established is that lying CIA Director Mike Pompeo who screams of deep state has cut off Pence's balls. I am sure though that Ivanka  will be kept around to suck his cock while Jared fondles Pompeo's anus.


As stated, Donald Trump is a Coward or a Colluder, as Frankenpompeo  has told the world he is the deep state choice and the Princess' only future is hoovering.

www.city-data.com/forum/politics-other-controversies/3057671-mike-pompeo-wants-president.html
Pompeo's reputation will ever be scarred by his association with Trump, and his best hope would be to return Kansas and rebuild from there. 06-18-2019, 03:15 PM Old Gringo

A Push for President Pompeo? | The American Conservative

https://www.theamericanconservative.com/articles/a-push-for-president-pompeo/
The ambitious Republican faces Secretary of State confirmation hearings today, but some say he may be positioning for more. Kristol, who helped to cultivate Sarah Palin, recognizes talent earlier than most. Forgotten now (not least by our president), Kristol wanted Pompeo to run as a NeverTrump alternative in spring of 2016,...


Certainly America is pleased that C & C Trump keeps raising a liar, a #NeverTrumper choice, who has had the Mockingbird sowing stories about how President Pompeo is the future. That is the power in this, in the Kushner's nor Pence can take on the Donald's choice. 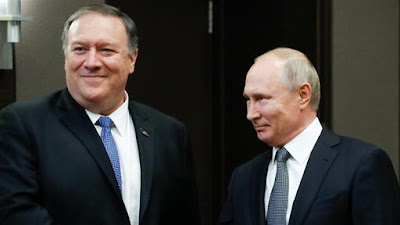 
Once again, you are living in the future with me, and this looks like some really nasty pissing on the leg of Donald Trump as Trump leaves a yellow trail in his wet legs brushing up on the furniture. You can count on the  reality if this 3rd wave is cementing into place, then this is the real coup, as the feckless Pence and Kushner are in hiding, as the real dogs are out.

These though are the things which need to be hashed out before 2020, as Donald Trump in C & C has already promoted  himself, saved himself and is in a White House, where his Secretary of State, who said the CIA lies, swindles and murders, has now labeled Mike Pence a PUSSY, who Pompeo does not have to even consider as Pence is so PUSSY, and Mike Pompeo is  the deep  state choice to rule over the American Genocide and Ivanka can go back to what she is good at, in sucking up.

So the future of the Trump Nazi party is Mike Pompeo who will be the force bullying the Obama Communist party as the democratic party splits and the GOP becomes a fringling group like the greens, according to Webster Griffin Tarpley, before he was silenced for telling the world too much.

Does it really matter that if Trump is a Coward or a Colluder when the results are all the same? It is though why at Trump rallies I would that people would stop chanting "lock her up" and "send her back" for "PAY US OFF DONALD".

Trump bought off the mafia  construction and Pentagon with his bankrupting spending bill. Before 2020, before the nomination is the time for Republicans at rallies to embarrass the hell out of Donald Trump in demanding their Gary Cohn 30 pieces of silver like Goldman Sachs.

How about instead of a chicken in every pot, a gun hand out to Republicans for starters in the Trump buying votes campaign as his supporters have not gotten  jack or shit for 3 years.

How about each of you making your dream list and Donald Trump does not get your vote unless you get your 30 pieces of silver. If you don't, the gulag is not a great place to negotiate from with a Mexican in your house and an Asian Nigs having your jobs and gunning for you.

The election has been stolen for Donald Trump, and he believes the promise that Ivanka is the future of the Trump Nazi party. The problem is the President has abandoned his base to save himself, and a new leader  has already been chosen to hand over the Trump chair to.
It is all about that Andrieu Riera 15% in what the voting machines all tabulate for the casino.  That 15% is going to be sweated here with factual posts in what the present reality is, and what the future is being projected for over your graves.

Donald Trump may con the zombie into getting close to that 15% in voting for him again, but the zombie are not going to be casting a vote for Mike Pompeo to rule over them. 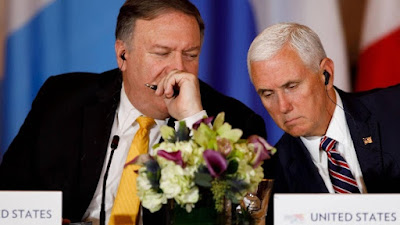 It's time to say goodbye Mike.

https://www.washingtonexaminer.com/policy/defense-national-security/mike-pompeo-confirms-hes-interested-in-presidential-run
Secretary of State Mike Pompeo is open to running for president after his boss leaves office, the top U.S. diplomat confirmed. "America has given me an awful lot," Pompeo said Monday in ...