Tumbleweed Greens and Fat Back 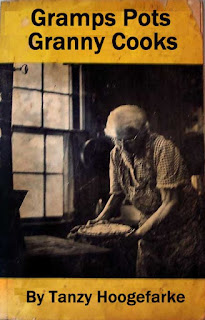 
I was looking for a recipe for Sand Hill Crane, the Fillet Mignon of the Sky, they say, and it appears about whatever you do to them is what you do to them, but you have to soak the meat to get the blood out, as that is what is  the problem, along with the meat bunches up like bobcat meat.

Anyway, I found this thread and comment which mentioned this.

I have an old cookbook from the early 30s that includes recipes for Egrets, Cranes, Owls and Eagles.
All of them are your basic poultry recipe, but with more larding, boiled bacon lathe and basting than we do these day.

So I started looking around and there was this recipe book from Tanzy Hoogefarke of Nebraska, originally Wisconsin, in which I found a few recipes, which apparently now will get you a 2500 to 10,000 dollar fine, but Tanzy was from an era which was a bit different.


It all starts out with this passage:


Parents arrived from Sudetenland in his goddamn Wisconsin. Place is all trees and can't raise shit. Cleared the trees, built a shed to live in,  froze near to death, and then some sheissen burned the shack down.
My prospects were not so good, but along came Heinze Hoogefarke riding his big footed horse. He said he was going to Nebraska, so I said I was going along to be his wife. He had a gun, a pot, a knife and he bathed in his inner longjohns so was clean.


This is her first recipe:

Hiney shot himself a fair white bird,(egret)  roosting in the grass. Some of the goddamn neighbors were there. Slavs I think. Can't understand them and ran them off with a stick. The bird had long feathers like a rooster and a big beak. Not much to it, but I...

Cut the bird in pieces.
Got the pan good and hot over the cottonwood fire.
Fried up the bird in bacon grease.
Took it off the  hot coals and covered it up to cook slow.
Put salt and pepper on it.
It was ok.

Tanzy moves on to the following:

Was sitting out with the Lutherans. They had some rhubarb. Goddamn eagle swooped in and tried picking up one of the pigs. Hiney shot it,  well shot them both, as dat buckshot finished off that squealing pig and the eagle.
The Lutherans were none too pleased, but got to scalding that young hog, while I got to plucking that goddamn brown eagle.

Cut the bird in pieces.
Soak it in salt water.
Fried it up in hog lard and cracklings on a medium fire.
Covered it up and let it simmer as them are tough birds
Salt and pepper and ate it.
Damn country full of ducks and eating eagles.


Then there was this tale:


Hiney and I were in bed, and what was a hooting in the tree, but an owl. It was a cold night as the water was froze in the bucket in the kitchen. Hiney gets up, pokes the gun out the window and shoots that owl. It flies off, but is moonlight, and Hiney is a watching and sees it go down in the willow by the crick. He gets his boots on and goes and picks it up.
I get to plucking and for all them feathers these horned head birds don't have dat much body to them.


Cut the bird in pieces
Decided to bake it up with apples and some onions as they was getting soft
Put in plenty of water and give it a good 12 hours and still was a might tough.
Salt and pepper and ate it.
Lot of work for a bird that don't have much to it.


She closes with this one:

Hiney and I had the children out by the rushes for a picnic of sorts.Prairie chicken fried and a pie made without apples. Had some vinegar tea to top it off.
Hiney though had his gun and along come swimming a big white bird with a big mouth (pelican) and he shot it.
Damn bird had a nice sucker fish in it's gullet that Hiney skinned out, while I picked and gutted it.


Fried it up in the coon grease bakings from the day before.
Tasted like fish.
I told Hiney to not be shooting any more of them damn birds for eating as it tainted the coon grease.
The sucker fish was good.


So that is the recipes of America. There were quite a few more in things Hiney brought back. An Indian goose (cormorant)  which ranked below the pelican and coot too as Tanzy did not appreciate them as she was not fond of fish.
She did have something called a Falcon Fricassee that she said some goddamn know it all southerner came parading through on the train and showing off, as Hiney had bagged a few in a perch tree, but Tanzy thought it took too many shots to get them falcon. She liked putting a Newhouse trap on the clothes pole, outside the chicken yard and catching them bird hawks. Said she liked putting them into canning jars, with salt and pepper, baking them up, sealing them with the zinc cover and having them for a treat during blizzards. 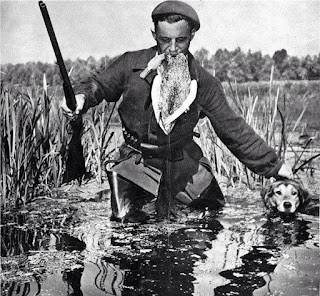 She did mention them buzzards stunk like shit and tasted like shit. Hiney was to waste no more shots on them.