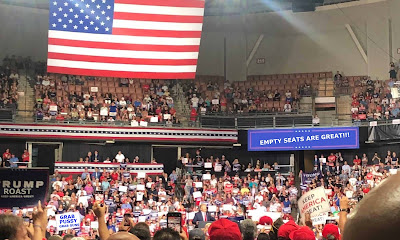 
I personally am puzzled at the ignorance of President Donald Trump, after his whining lament in the press over coverage that his New Hampshire rally has empty seats, while supporters were left outside to watch on a big screen.

I do not know if Trump was trying to divert attention in blaming the press, to cover up the reality that there are two major problems with Trump Pence 2020, if there are empty seats in an arena.

Empty seats point out that the Trump advance team is inept or is colluding to defeat Donald Trump.

Empty seats point to the fact that the Republican leadership in New Hampshire is sabotaging Trump 2020.

Here are the New Hampshire conspirators as someone locked those doors and kept people out.

On abortion, Sununu says that he is pro-choice, but opposes taxpayer funding for abortions and supports the ban on partial-birth abortion] Sununu had supported other contracts with Planned Parenthood. He later reversed his position and voted to restore the funding.[38] In 2018, he said "I'm pro-choice. I support Roe v. Wade."
Regarding immigration, Sununu said he would refuse to send the National Guard to the border to enforce Trump's 'zero-tolerance' policy that has resulted in family separations.
Sununu is seen as supportive of LGBT rights; he said that he does not get involved with the state's GOP platform issues and he was a speaker at an event for the Log Cabin Republicans, a GOP political action committee that supports same-sex marriage and other gay rights. In 2018, Sununu signed into law two bills intended to protect the rights of the LGBT community. He signed a bill prohibiting discrimination based on gender identity as well as a bill to ban 'conversion' therapy from being used on minors. In 2019, he allowed a bill to become a law, although without his signature, creating a non-binary gender option for drivers' licenses.


See the problem with just blaming the New Hampshire Nazis is for some reason the Trump 2020 staff was either inept in understanding seating numbers, filling those seats with numbers, or they are joining with New Hampshire liberals to blow a rally.


See someone leaked to the liberal CIA press that this event would have empty seats, and they focused on that immediately. See someone inside the Trump 2020, made sure that Trump was informed of those stories and he went vulnerable, compounding the situation by calling attention to it.


The problem is that empty seat stories in the press being unfair does nothing to rally people in 2019 as in 2016, for the simple reason, Donald Trump's Supreme Court is voting liberal, Donald Trump never kept his MAGA promises and the real gem is Donald Trump is going to be digging around in your medical records in new regulations to see if he can confiscate the legal firearms you legally purchased.

I have stated that Trump needs that Andrieu Riera 15% vote spread to keep his adversaries from stealing 2020 as they tried in 2016 AD in the year of our Lord. At this point, the satirical lampooning here is running at 17 to 18 % in pointing out the realities of National Socialist Donald Trump. If had gotten a sweetheart deal as Gayway Pundit did in being rewarded, I would be happy and not being blistered by Trump policies of poverty and repression of Protestants. So the effective measure is satire and it is biting at that 15 which Trump needs.

This is beyond the ridiculous stories Bill Kristol and Anthony Scaramucci, who are worthless diversions. What is of note is Donald Trump has either a worthless 2020 campaign or he has swamp rats creating false stories and making supporters stand outside. There is not any way this is a strategy in making Trump an underdog or a victim of media again, as weakness is a pandemic in races, and Trump is suffering from the malady in he is falling behind in he is not effectively defining democrats, as they are effectively defining him as a loser.

If Donald Trump bought off Americans with bribes that he has forgotten, I would be the first to support him. Instead Donald Trump is pure New York Nazi in policies in he is sucking the Jeb Bush kook ade, which he thinks he can screw over the right, while he swings hard left in betraying the right to realign the neo Trump Party of Ivanka voters.


The United States is in the Obama Super Depression. American Protestants are the last generation in they will be replaced by Jesuits and Muslims. Mr. Trump looted the country to save himself in keeping Obama taxes on Americans. He is Obama's 3rd term in being Jeb Trump. His worst blunder is Iran in Russia has  now made  Iran nuclear, and Russia has direct access to the Indian Ocean.

Donald Trump still has zombie support as politiards do not pay attention to the Pied Piper leading them over the cliff, nor more than democrats do. I can tell you this, if what took place in New Hampshire happened to Richard Nixon, Nixon would have sacked everyone, and the liberals of New Hampshire would be in hiding. If this would have happened under Ronald Reagan, IT WOULD NEVER HAVE HAPPENED UNDER RONALD REAGAN as he had a loyal campaign staff for re election and Republicans had been rewarded in the masses that the leaders were terrified of the mob.


Donald Trump was the only horse in the race in 2016. In 2020, he is a horse of a different color going over the edge, and I am not going there nor am I going to lie to people in telling them this shit hole is a rose garden.

These are Donald Trump's problems and they should be fired as New Hampshire belongs to Bard Parscale a wetware wonk who is shit for brains as Jared Kushner when it comes to what a campaign is.
New Hampshire's disaster is the responsibility of Michael Glassner, John Pence and Megan Powers. 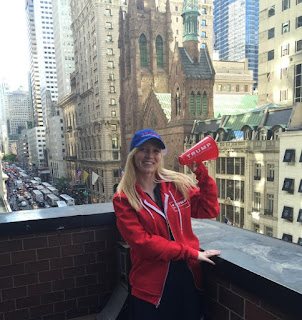 Powers is the administrative operations director, that is supposed to be the person who does the advance work, coordinates, decorates and makes certain everything looks Mike Deaver.

As this is a preview of Trump 2020, it reveals none of these people are capable of the work which requires to be accomplished or more to the point, all they are suited to is not recognizing that there are enough people inside Trump 2020 who are handing this election to President Joe Biden and Vice President Kamala Harris.


This poor orphan girl is a fixer and I see a problem, and even after all the MAGA betrayals, I still post the facts and those are the facts in what is the Trump 2020 campaign. Donald  Trump needs to create some empty seats inside his campaign by firing them, and replacing them with actual people who can accomplish simple things like counting heads and making sure those heads are in the chairs which have already been counted.

That is the reality and this President does not have time with a collapsing economy, his betrayal of the base, his trust in the cartel to win one for the Gipper, to not get this straightened out.

I offer this advice to this President. That idiot Senator John Thune of South Dakota is for Nazi reasons a Trump groupie now. Thune coordinated with the Bush machine to take out Dickhead Tom Daschle in the most powerful democrat in DC.  I am not talking about anus reamer Karl Rove as Trump needs more than the  razor thin margins or he will lose in 2020. Get a Thune coordinator who is an honest broker.
Get a Thune ass hauler to ride drag on this every day who understands arena events and if you can not get that, talk to Vince McMahon and get his daughter, Stephanie,  with her husband, Paul Levesque, to fill the seats and get Shane McMahon to do the advance work.

America first here, before there is not an America.