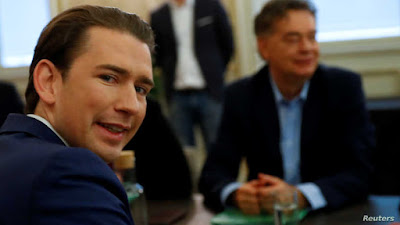 
Since September 29th,  Chancellor Sebastian Kurz has been the resurrected leader of Austria, arising from a political death wound, inflicted upon him, by a Jewish operative of Bill and Hillary Clinton as Steve Bannon with anti Pope Jesuits held the garb of these political assassins.


Fascinating coincidence that September 29th was the High Day of Jewry in the beginning of their new year and ends Biblically on Yom Kippur which will be Armageddon in a coming year.
The protector of the Jews has been waiting over 3 months, to form a government in Austria,  an unheard of time, a time though of the Roman new year.

Kurz said on Friday as talks resumed after a short Christmas break that he aimed to have a government sworn in by "early to mid-January."


The Roman first deity Janus, is who Sebastian Kurz has apparently been waiting for. The Deity of Doorways, in something is opening on the lucky passage, the god of gods, appears about to have a realm upon earth as his footstool.
That which was dead is about to rise, birthed on September 29th and delivered in the luck of Janus.

Janus as the god of all beginnings and believe that his association with doorways is derivative. He was invoked as the first of any gods in regular liturgies. The beginning of the day, month, and year, both calendrical and agricultural, were sacred to him. The month of January is named for him, and his festival took place on January 9, the Agonium.

We are learning from the Green Party who Sebastian Kurz has chosen as the weakest link, to afford him the federal authority, to establish the exact government his supreme leadership mandates.

As this blog first predicted, Sebastian Kurz will hold all financial and security power, and provide the Greens with the crumbs of the environment.
In an amusing return to the Fatherland, Sebastian Kurz is investing heavily in infrastructure to making the trains run on Green Time. Those trains are for moving state assets, not the Greta Thunberg pedo politicians.

Few details have emerged so far, but Greens leader Werner Kogler has said he wants an investment package in environmental measures, and Kurz has said his priorities include continuing his hard line on illegal immigration and keeping a balanced budget.
There have also been reports the deal includes large investments in expanding Austria's rail network.


This is an auspicious time, the great illumination is about to rise. If only someone was living in the future who posts in a blog had 999 rich people who would donate 1000 dollar each.

The dice has been cast. There is not any putting it back into the hand.


Mick Jagger - "Pleased to meet you Hope you guess my name ...