Christmas is Christ In Us 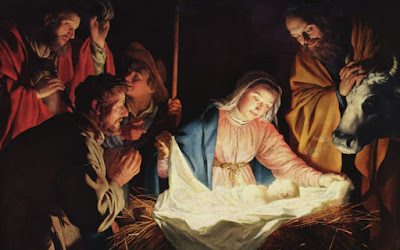 What is lost in this Christ Mass of the Catholics is the meaning of Christ, for He is not Light alone, but Immanuel, God With Us.

No Christian is ever alone, and no sinner, no matter their self condemning sins is ever barred from coming to Christ. Jesus is not going to put up with deliberate sins as that is deliberate rebellion against God, for God is Light, and disobeying God deliberately is darkness, and there is no part of God in that.
It does not matter what the evil was though, and it does not matter the weakness nor addiction in constant failing, Christ says to "Come" and all are welcome, not to use Him as an excuse to sin, but as the Way to overcome sin. For we may fall down daily in weakness and lusts, but the Christian has the will to stop sinning and get up a Christian each time in Jesus the Christ.


Commit your way to the LORD; trust in Him and He will do this: He will make your righteousness shine like the dawn, the justice of your cause like the noonday sun.


The essence of Christmas is in St. Paul's letter to the Ephesians in Chapter 2.


18  For through him we both have access to the Father by one Spirit.
19  Consequently, you are no longer foreigners and strangers, but fellow citizens with God's people and also members of his household,
20  built on the foundation of the apostles and prophets, with Christ Jesus himself as the chief cornerstone.
21  In him the whole building is joined together and rises to become a holy temple in the Lord.
22  And in him you too are being built together to become a dwelling in which God lives by his Spirit.


As Christians, you are no longer a body and soul incomplete, but by accepting the Lord as the Son of God and the payment for your former self in sins, the Holy Ghost enters into you, and you become Spiritual. You are Light of God, no longer someone God views as an outsider, but part of His Spiritual Family.


There is a dire warning though to never return to deliberate rebelliion aginst God, as that is a rejection of the Holy Ghost bringing you to eternal Life, and the opposite is eternal death, as this is serious and not something to be squandered. That line in the sand is not to be exploited by satan that you are not good enough nor have been rejected by God, because if you have a thought in you of being guilty or a concern about your imperfections, you are God's and being compelled to come back to Him, to be renewed again.

There is a reality which requires stating. God has no part in homosexuality. God has no part in adultery, sex outside of marriage. Lying, cheating, stealing, not caring for others are not of God. Murder in the womb and out is not of God. These are abominations, and those who bring this into a church and claim from the pulpit that God loves all, are nothing but tools of satan in weaving a lie to for those who choose to be deceived in their sins, have sentenced themselves to eternal death.

You though, are looking for the Light, to become one with a family of Saints, whose future is eternal Life in a peace which passes all understanding and a love which encompasses from within and without.

That child having no room in the world, and born to die for the world's sins, is in Heaven on the right hand of the Father. By Him we come to  the Father, by the Holy Ghost. This Jesus will come again, and we pray quickly, as a Warrior King, to established Justice upon the earth and in weeding out the sinners in mass, provide for 1000 years of a Sabbath prove to the world by action, that His Way, His Truth and His Life, is the solution to all chaos and turmoil, in they willl have been vanquished as satan is imprisoned in a bottomless pit.

Christ says, "Come", not later, not tomorrow, not when you have time. Christ says, "Return", and He means come to Him now. Talk with God. You are not going to tell Him anything He does not know about you, but in talking, you confess the things in your heart, to face them and have Christ help you overcome them. And in that, your profess that you need Jesus, as we all need Jesus every moment, as we can not do anything without Him, which will last.

God bless each of you this Merry Christmas, and in that Joy of Christ, may you have the protection of the Lord with His Holy Angels for the Glory of the Father all through the new year. In Christ, Amen, Amen and Amen