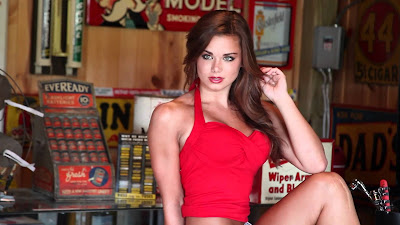 I was instructed with this:


Message:
“The Ass Fat Face of Hillary Clinton”. The woman on the left is one of Hillary’s doubles. Check the distance between the irises. The eye color is different as well. She was sent out while Hillary stayed “home” and “rested. ”

This is the photo of the irises. 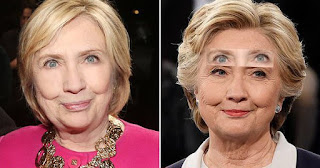 The irises match in distance. So what does this prove in satire? Nothing as the point was to mock this woman for the ridiculous cartoon she has descended into.

As for the eye color, the purpose of this pro Clinton propaganda in why Hillary was posing with Bill at a photo op event was to highlight her youthful Aryan eyes, not dark as dung as the mud folk masses are. It is called photo filtering. It was employed to make Donald Trump look orange. Grey scale makes people look dead.


This is a nose comparison. They match too and as this was not reconstruction surgery, but instead was fat cell injections to fill up the epidermis of a fossilizing old woman, the results was an ass face. What it reveals is Mrs. Clinton's skin has lost all elasticity. Something far worse than paper thin skin, is the sagging indicates fluid retention problems. Fluid retention problems indicate the same heart condition she was suffering previously, in her heart muscle is not strong enough to effectively remove fluids, fluids built up when injecting ass fat, to which the body then swells as a protection to being bruised.

All the technical medical information is not amusing, and I needed some amusing after the summer of hell I had in taking care of a geezer, followed by a year of hell in having the old mother die in my arms about a year ago.

Sometimes I need to have fun on this work for nothing blog where daily I face a reality of not knowing it will be my last due to the content posted here displeases real people in power.

And as for the Hollywood revelation on detective dramas on checking the distance between the eyes which solves so many cases. The real crime labs know that it is an inexact platform, as one can not simply blow up or shrink photos taken at media events. It requires precise measurement from camera lens to the subject in distance, as age, time, cranial growth and shrinkage change the dimensions of a skull, as much as ass fat injections. Without that precision, photo comparisons are of zero forensic value.
The term of this is facial triangulation.

This is more information than is supposed to ever be placed into the public forum to educate the masses.


As this is a teaching lesson for all, the Clintons are "bankrupt". Yes they have squirreled away a few million, but the cartel is promoting Donald Trump according to their agenda. The cartel is feeding Hamrod line to run again to retaliate on her again as this blog hinted at why. No one wants this freak show. So who is it that volunteered as their job to have their face morphed into a freak show, which only gets worse for the cheap ass salary the Clinton's can only afford. Chameleons do not come off the shelf and they require maintenance.
The Clintons do not have access any longer to the professionals who engage in this medical field. They can not bribe a doctor enough to hide this creation.  This is the face you get when you do not use Ivanka Trump's professional as the Clinton's are cheap ass, bankrupt, back door ass face injectors.

I wanted to have fun with this, but this turned into work again, in forensic pathology as Hillary Clinton is rotting to death. Her cells are in aging breakdown and her system functions can not cope with normal injury and repair.

What is troubling is, this is what she looks like after reconstruction and she looks hideous. She is an old lezbo, who gave up on the Huma toys, so her sex drive is nill. All indications she is Phase II on the scale.

If readers are trying to be helpful, thank you, but understand I am getting soul daggers to the heart all the time, and those things bother as I try to keep us alive here.