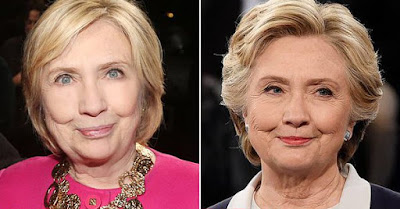 It seems that Hillary Clinton has given her rapist husband Bill, an early Christmas present as Hamrod rigs up to run for the 2020 presidency again, being about as old as a mummy.
Most wive get breast enlargements, but Hamrod has chosen to suck the fat out of her ass and inject it into her face.

Hence we have the new socialite style of ASS FAT FACE. 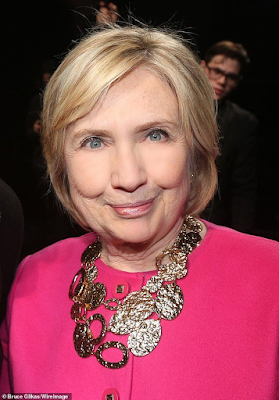 Yes it is disturbing as the Botox face, but why Hillary Clinton thought this was a youthful idea to move her two state zip code sized ass to her face, is inexpiable.

Honestly, I can not quite figure out which two states Hillary Clinton looks like.  I know she looks like Bruce Campbell from Army of Darkness, but I am sort of leaning toward I can see New Jersey in Hillary's lower half and Painsylvania in her upper half.

I am pleased she kept her bubble butt cheeks though, but then her mouth looks like her anus, and you wonder if her nose is her primate tail bone she has grown.

I think instead of having a saggy ass face with double chin, she should have just opted for the big tits. Big tits would have pulled out most of the wrinkles in some 55 double G boobies, because her head would have to be inflated to the size of Michelle Obama's big ass to make up for all that wrinkled skin.

It is Hillary's 2020 look though, and it appears her baby blood injections have her eyes glowing like a vampire, so at age 74 she probably might last until she hijacks the convention and the rest of the other candidates die or get suicided which happens to people around the Clintons who do not  get out of the way.

I just wonder how much trauma that old woman's body can be put through, as she fell apart in 2016 AD in the year of our Lord, before she blows a vein, blows a heart valve or she gets a puberty pimple on her chin and half her ass leaks out onto her granny clothes.

She does though look more like a man in this ass face genre. Maybe she thinks transexual Harold Rodham Clinton will be the one to defeat Donald Trump as she has not been able to beat anyone as a woman.

I simply do not know, other than these people have psychological problems in thinking this does not make everyone of them look like a damn freak.

I mean who wants to wake up to an ass fat face every morning, and that is what Hillary Clinton now looks like.