Ivanka and the See Through Top 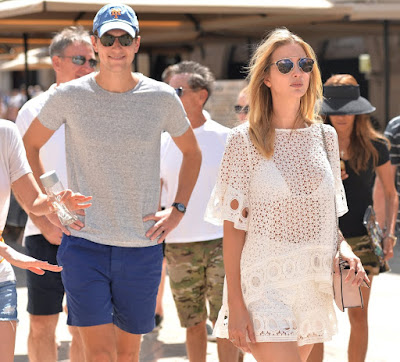 https://lamecherry.blogspot.com/2017_05_29_archive.html
As another Lame Cherry exclusive in matter anti matter. This pertains to the Lame Cherry exclusive of 2016 which explained why Joe Biden was in the Balkans and why Jared and Ivanka Kushner were prancing their asses around on liberal yachts in August as the Trump campaign was in meltdown.


As you can read from the above, this blog broke the story of the back channels of the thread of Wikileaks as an asset of the operation to expose what Attorney General William Barr is investigating, in the original investigation of Peter Strzok in his internal affairs investigation of a mole ring operating for the supplanting of the US regime.


The part of this enigma, wrapped in a riddle, which is of interest is the operational platform which was being utilized by the American intelligence wing of Mosaad, and how in August of 2016, immediately after the Republican convention, the Kushners bolted off to the Balkans on vacation, on David Geffen's pedo yacht, with a cast or Russian and Chinese agents, while Vice President Joe Biden showed up in the Balkans, and in the meetings which took place, Joe Biden could not stop the leaks of Hillary Clinton's files from being published, but Jared Kushner succeeded in keeping this pipeline open.

Robert Mueller lied in his investigation that Guciffer 2.0 and Russian intelligence from the military were hacking democrats. That reality or cover up is protecting that part of the operation which was opening all of this up, in the coups against Donald Trump.

The meeting place of everything Wikileaks in the Balklands is the Jeffrey Epstein Jew, David Geffen of Disney. The Jew Geffen would appear in the Kushner inner circle of the US Open, where Russian oligarchs, Wendi Deng, and the Jarvanka were centered in the PLA of China, the FSB of Russia, the Mosaad of Tel Aviv as the grease, and for a too much attention, but prefect diversion, the Kushner's, the couple of the future President of the United States are in the picture.

The Kushner's are known associates of a number of Russian monopolists or oligarchs. From Jewish mafia, who were part of the operation in using Russian diamonds, to break the DeBeers monopoly on the world diamond trade.............


Bannon is the co-founder and former executive chairman of conservative website Breitbart News. In a July 2017 email exchange, Bannon and an unnamed Breitbart employee described an investigative story in The Guardian about Kushner’s alleged business ties with Russian-Israeli diamond mogul Lev Leviev.

https://www.forbes.com/profile/lev-leviev/
#2124 Lev Leviev Known as the "King of Diamonds," Lev Leviev owns an integrated diamond outfit with mines in places... He made his name undercutting the DeBeers diamond cartel, striking his own deals with... Leviev is also the controlling shareholder of Africa Israel Investments,... Leviev was ...

It was in the debriefing of Steve Bannon, again, a DIA extension, who joined to the Mosaad extension of Andrew Breitbart, who built faggot Matt Drudge's store front of Mockingbird direction of right wing media, now a left wing media platform, where Bannon mentions the August 2016 AD in the year of our Lord operation that the Kushner's were fronting for.
Bannon appears in the dark of what the Kushner's were involved in, but he lists the Kushners, Wendi Deng, a Russian billionaire and his girlfriend, in being on the David Geffen yacht. 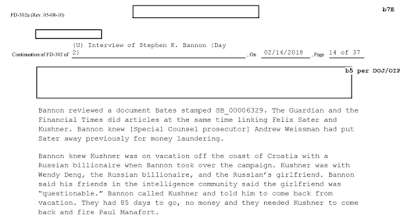 Notice in the following statements by DIA Bannon, that Bannon was focused on what Jared Kushner was necessary for. Jared Kushner, was needed to draw in finances to the Trump campaign.
Remember in this, that Trump said he was self funded. Remember in this, that the RNC under Katie Walsh had dried up all of GOP funding for Donald Trump, in her John Ashcroft deep state attempt to defeat Trump or gain control of him in blackmail.
Remember in this, that Bannon needed Kushner back from Wiki Croatia to fire Paul Manafort. Manafort was a Dole man, who the Missing Link had moved into the Trump campaign to begin the investigation of Donald Trump.
John Kasich of Ohio had hired all the convention wranglers, in order to force Trump to hire Manafort, as Manafort was whispered through the Trump inner circle.

Bannon told Robert Mueller that “Kushner was with Wendy Deng, the Russian billionaire, and the Russian’s girlfriend.” Wendy Deng was the third wife of media mogul Rupert Murdoch; the two divorced in 2013.
Bannon’s sources in the intelligence community told him the Russian’s unnamed girlfriend was “questionable.” And he recalled Kushner to Washington. “They had 85 days to go, no money and they needed Kushner to come back and fire Paul Manafort,” the interview notes read.

Bannon is not focused on the Jew perv Geffen, but on the Russian billionaire. Bannon is fixated on this person, as he knows this is the key player in this Wikileaks drama. There was an involvement of Russian FSB in this. The glue appears to be Mosaad. The connecting link in this is the KGB was hunting something. Hunting the same thing Attorney General William Barr is hunting, a rogue sleeper unit the Soviet's established inside America, whose principles were working with MI6, and select Americans, whose purpose was to start a war between the United States and Russia.
Putin's Russians have been hunting Soviet assets in the West who were coordinating for his downfall. 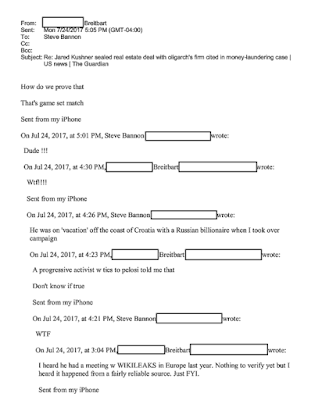 Jared Kushner shows up like a bad cyst on all of these oligarchs. A Jewish slum lord, but it is who Kushner slept with  which matters in Benjamin Netanyahu, who was just removed by a Mosaad coup.
All of Jared Kushner is, is the public face of diversion, so the real agenda can be implemented by the powers.
It is why Jared Kushner was given immunity by Robert Mueller, in he was off limits, because it was his store front where this all was taking place in a counter operation.


Ivanka is good friends with Dasha Zhukova, the art-collector wife of oligarch Roman Abramovich, one of the richest men in Russia. Abramovich isn’t just the owner of the Chelsea soccer club; he’s reportedly a member of Putin’s inner circle.
In early 2016, the Daily Mail reported that Abramovich had given Putin a $35 million yacht. A Russian official, who ran a state-run shipping firm, told the Daily Mail he oversaw Abramovich’s transfer of the 187-foot Olympia, which sleeps 10 guests, to Putin.
In September, Ivanka and Jared  were photographed together with Zhukova in VIP seats, watching the U.S Open tennis finals. Also in the box was Wendi Deng, who is good friends with both Zhukova and Ivanka, as well as billionaire entertainment mogul David Geffen and Princess Beatrice of York.


In the photo below, you can see the powers, in what Ivanka Kushner brings in her father's position. The Russians dominating, the PLA vagina for Rupert Murdoch's MI6 penis, the fag, and the Little Princess who by body language tells of her discomfort and how she wants to run home to mummy.

Ivanka’s most high-profile gesture of friendship towards Zhukova came when she invited her to be a guest at her father’s weekend inauguration festivities, tweeted Politico senior writer Jake Sherman on Jan. 19.

Team Kushner, yes he is a putz in New York, but it is the cooties in his panties which are the interesting part.
Were you paying attention to the exclusive that Lame Cherry informed you of exclusively in matter anti matter, or did the Jarvanka distract you again? 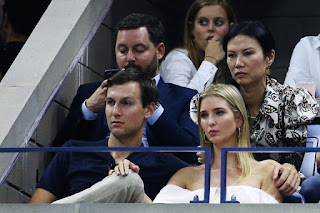 Has Jared Kushner Been Targeted by Chinese Spies? | Vanity ...

Here I will help you as I am certain you missed the important top of Ivanka's see through.

The connecting link in this is the KGB was hunting something. Hunting the same thing Attorney General William Barr is hunting, a rogue sleeper unit the Soviet's established inside America, whose principles were working with MI6, and select Americans, whose purpose was to start a war between the United States and Russia.Putin's Russians have been hunting Soviet assets in the West who were coordinating for his downfall.