Donald Trump Shut Down the Rapine of Obama Green 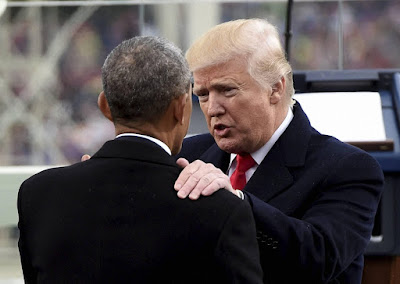 You really were one crooked foreign bastard Barry.

While I have no idea if President Donald Trump is once again playing election year politics, his recent statements concerning the fraud and danger of Wind Energy while speaking to Republicans in Florida, is an issue which the Lame Cherry completely agrees with.

“I never understood wind,” he said. “I know windmills very much, I have studied it better than anybody. I know it is very expensive. They are made in China and Germany mostly, very few made here, almost none, but they are manufactured, tremendous — if you are into this — tremendous fumes, gases are spewing into the atmosphere.”

That is okay. But why is it okay for these windmills to destroy the bird population?”
About 150,000 birds are affected annually by wind turbines in the U.S., according to a study earlier this year.
“Look, I like all forms of energy, and really they are okay in industrial areas,” the president said, while taking issue with the appearance of the structures.
“I have seen the most beautiful fields, farms, the most gorgeous things you have ever seen, and then you have these ugly things going up,”


The Lame Cherry would appreciate providing more information for the President on this subject of the fraud of "wind energy", because it was like all Obama "green" progams, in being nothing but a quid pro quo, money laundering operation.

For the record, "wind" in the United States was dominated by Spaniards out of Europe. It was an economic windfall in foreigners were paid by Obama to put up wind farms. Yes Obama paid foreigners to employ and build these worthless energy grids.
Obama took the step further in putting in regulations where local power companies in rural states had to purchase "green" energy from wind and solar, at triple the rate of coal energy.

I have spoken to board members of Rural Electric Cooperatives in South Dakota who informed me that 40% of their REA's electric must come from the Obama mandate, driving up electricity prices. The damned part of this is, South Dakota has 4 hydro electric dams, which is REAL GREEN ENERGY, but Obama for his foreign cronies wrote the law that hydro electric power is NOT GREEN.
Obama is not interested and never was in the environment. His policies were all about rewarding cronies and stealing the future from Americans.

Obama Orders U.S. Government to Use 20% Renewable Energy by 2020

https://www.solarreviews.com/news/obama-orders-government-clean-energy-solar-2020
The announcements included launching an energy efficiency loan program through the U.S. Department of Agriculture (USDA) that will provide up to $250 million to rural electric cooperatives to lend to their business and residential customers to install renewable energy and make energy efficiency improvements.

I have covered the other Dakota as Rush Limbaugh calls it in North Dakota who have coal fired plants. They are in a quandary as Minnesota in their Soviet system has been shutting down coal fired power plants and mandating Obama green energy. The problem is Minnesota is only putting up wind and solar. The sun does not shine all the time, nor does the wind blow, so Minnesota to the consternation of North Dakota, expects North Dakota to generate coal electricity for them as Minnesota "goes green".

This is like saying you are faithful to your spouse, and having sex with whores in the next town over.

The Rapine of Obama Green was known already in years ago. In rural Minnesota they were paying 70 million dollars a year more for Obama wind power, but hidden in this was, Minnesota had to purchase electricity from North Dakota, which was burning more coal for the bigger load, so in the end, no less coal was burned, and all that was left was the higher price of Obama Green.


Taxpayers already pay a high price to subsidize wind energy through billions in federal grants, loan guarantees and tax credits that prop up the “windustry”. Now the bill for state renewable energy mandates is coming due with hundreds of thousands of Minnesota electric co-op and utility customers picking up the tab. Going green cost rural electric ratepayers in Minnesota more than $70 million last year, according to the Minnesota Rural Electric Association (MREA). The MREA represents about fifty mostly small, rural electric co-ops and utilities which serve more than 625,000 Minnesota homes and businesses.


In noting global trends, this blog discovered that while the President stated that Germany was producing wind generators, the reality is Germany was shutting down their wind farms. In the last stories of this about a year ago, Germany was looking to dump their broken system onto the suckers of Africa.

I spent a great deal of time traveling to TL's metro five years ago, and I was absolutely stunned on the interstate in the constant convoys of trucks which were hauling the blades off of these turbines. The reason is they were cracking, in wind is one of the worst energy systems there is. It only is available because the conglomerates got Obama to rob you of your money to subsidize billonaires, to rob you by forcing you to buy Obama Green.

Yes that is the reality, Obama's rationed death was not just Obamacare. Obama energy brown outs in the American Grid was the result of the corrupt Obama Green bribery scheme.

In wind, the turbines need to be serviced. They require special high grade lubricants which must run at high summer temperatures and frigid winter temps. The blades break. The wind does not blow all the time, and in some places like the Dakotas the wind blows too severe that the windmills can not be be put into operation.


The Minnesota Public Utilities Commission (PUC) directed electric coops and utilities to report the cost to ratepayers of complying with the RES. The top three wind loss leaders in 2011 were Great River Energy ($35 million), Minnkota ($27.5 million) and Dairyland Power ($18.1 million in Minnesota and Wisconsin combined). That’s a steep increase from 2010, when Great River Energy (GRE) reported a$22 million loss on wind energy sales, while Minnkota reported a $28.2 million loss the previous year. “Until market prices increase, Great River Energy will likely see continued negative effects from RES compliance costs. Great River and its 28 member cooperatives urge officials to weigh the impact of further costs when considering additional regulations related to renewable energy so that our rates remain affordable,” according to the Great River Energy website. GRE expects losses to increase again in 2012 to $35 million.


That is why the Lame Cherry has called for the end of wind turbine subsidies. They are funding foreigners, not Americans. These conglomerates do not employ local people, but bring in high paid people from other states. The electricity is undependable and costs 3 times even with subsidies what coal fired plants cost.

The Lame Cherry though does agree with solar power, but not on massive scales of corporate subsidies. Homeowners and small business owners should have the option, but that has to be rectified too as local power companies only pay pennies to homeowners for the same power they charge 300 percent more when it comes from an Obama foreign owned wind farm.

This Lame Cherry calls upon Donald Trump to invest 300 billion dollars for 100 clean coal power plants, burning hard coal from Kentucky and West Virginia and soft coal from North Dakota and Montana for cheap electricity for Americans, with a real move to begin replacing nuclear power plants in the United States with proven clean Thorium plants immediately.
Employ Americans only in this construction and this will begin Donald Trump's MAGA.

This President can expand Thorium to the Mideast, and end nuclear fuel production and produce clean Thorium worth trillions of dollars for the American economy.

The Lame Cherry will always defend ethanol and soy oil production and subsidies, as this lessens the prices paid to Muslim terror oil and Russian oligarch oil, and keeps money in the United States in rural states. The after product of ethanol and soy oil is a healthy animal feed and that waste product fuels coal plants too. What comes out of American farms is real green energy.

So for 2020, Donald Trump should end all wind power subsidies immediately and begin investing that energy money into coal, ethanol and thorium for a 2020 future.

When Donald Trump engages in positive polices for the United States this blog will be his greatest supporter. The problem is his policies have not been for MAGA or Americans.

Donald Trump must shut down the Rapine of Obama Green.