Futurus Ivanka, the Mother of America 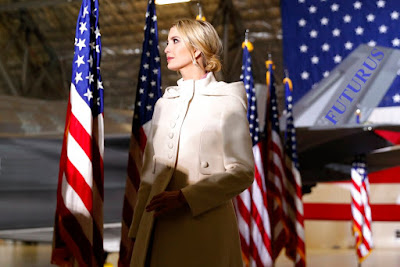 
Oh how I like the multitude, were unsettled, jittery, stomach of butterflies and light headed to read the statement of Futurus Ivanka, the First Daughter, stating that she is putting her children first, over her ambitions, over America, over everything, in stating when Donald Trump is re elected in 2020 AD in the year of our Lord, she may not return to the White House, the West Wing, Washington DC.

The Lame Cherry leads the chorus of NO NO NO NO NO, please Futurus Ivanka, we plead with you, we beg you, we ......just a moment as I consult a thesaurus for more words......we appeal to you, we beseech you (I like that as it sounds Jewish, real Jew not Ashkenaz) we conjure you ( like that as it sounds French. Always nice to have a French word in imploring.....rats used that word now and can not repeat it), we entreat you, we machinate you (not such a good word, but these are desperate times), we pray you (I like that in a Sebastian Kurz world) and what would say it all, but a simple Anglo Saxon word in we bid you Futurus to not abandon us your children, the children of your father, President Donald Trump.


Yes Ivanka is our political mother, think of her as our adoptive benefactor who fathered us in President Donald Trump from the brewing of the Tea Party, to a people.  Madam Futurus, we are weanlings, barely 3 years old, you can not abandon us, your father's children. You must raise us, as the offspring to the legacy of Donald Trump, we are the dynasty of Donald Trump, in the embryo of you. Ivanka you are our mother, our womb politic, without you, we will be aborted to the holocaust heaps of  the American Genocide. Futurus you are the only person the President trusts to lead us from the valley of the shadow and into the promised land.


President Ivanka Trump. Madam President, compare that to Mummy Mummy or that old biotch as your children are growing up, and will rebel and say things with you being around all the time in your being a good mother, the best of mothers in defiance of you. You have that Chinawoman eu paring those babes, is it not better to keep the Chinamoman, turn Jared into First Husband, house husband and Mr. Mum, and yes, the stay at home dad.
Jared would fulfill his purpose in life. He could take the children on rent collections in the slums of New Jersey where he owns all the ghetto dwellers. Think of the education in that. The children would learn to count money in mass, they would get a good workout carrying bags of rental money, they would learn street talk, they would become educated to never be like the tanskin and blackskins, they would see the Jew beyond the propaganda, and in all of this, the little cherubs would never call you that old biotch, because they would see the real world, and understand by existential experience how wonderful you are.
Ivanka, please Futurus Ivanka, your being with your children would be the worst thing for them. Absence of you would make their heart grow fonder and more loyal as it did with your father, and they would cherish you all the more.
Being President, Futurus is the best mothering you could mother your children with, both your kindred and your political children. Ivanka dearest, you are of course, not just a mother to your children, but the expectant mother of a nation, America, to be birthed in your beautiful image.

Once again, another Lame Cherry exclusive in eloquence as only a poor orphan girl could be so moved to such prose for the wonderful Futurus Ivanka.