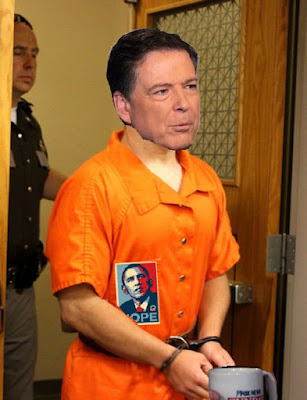 James Comey on Fox and #NeverTrump Wallace confirmed exactly what this blog stated in the James Comey messiah complex, that the entire law enforcement system in the United States has been destroyed under 20 years of Robert Mueller reorganization and James Comey implementation and this is why the FBI went scorched earth on Donald Trump and his campaign staff.

What stuns me was Comey's frank statement as if "this was wrong and a mistake", as is this would suffice in destroying people's lives and bringing down the United States Government.
Comey went on to state that the FBI does not expect it'ss managers and supervisors TO DO THEIR JOB OR BE INFORMED.

Let us repeat that, in the FBI does not expect people who oversee FBI investigations to know what their agents are engaged in, for that matter the FBI lawyers are engaged in, in filing warrants to arrest Citizens.

James Comey's excuse is basically, THE DOG ATE MY HOMEWORK.

“I was over-confident in the procedures that the FBI and Justice had built over 20 years. I thought they were robust enough.”


What is stunning in this is, James Comey's confidant and friend, Agent James Baker, and Obama Clinton supporter, was not apparently aware that Donald Trump was being framed, The two highest operatives in the FBI, intimate at they were, and they had absolutely no idea they were being lied to, but charged ahead to destroy innocent people's lives, and did their utmost to push back in silencing those who were challenging this nonsense.

“Although we do not expect managers and supervisors to know every fact about an investigation, or senior officials to know all the details of cases about which they are briefed, in a sensitive, high-priority matter like this one, it is reasonable to expect that they will take the necessary steps to ensure that they are sufficiently familiar with the facts and circumstances supporting and potentially undermining a FISA application in order to provide effective oversight, consistent with their level of supervisory responsibility. We concluded that the information that was known to the managers, supervisors, and senior officials should have resulted in questions being raised regarding the reliability of the Steele reporting and the probable cause supporting the FISA applications, but did not. In our view, this was a failure of not only the operational team, but also of the managers and supervisors, including senior officials, in the chain of command.
For these reasons, we recommend that the FBI review the performance of the employees who had responsibility for the preparation, Woods review, or approval of the FISA applications, as well as the managers and supervisors in the chain of command of the Carter Page investigation, including senior officials, and take any action deemed appropriate.”


So the FBI officials who were involved in this, by James Comey lack of leadership, were all too busy to read the investigation files. So what would James Comey say they were engaged in?

Lisa Page - Lisa was late in her menstruation and was worried she was pregnant with Agent Strozk's baby.

James Baker- Jimmy and I were exercising a great deal and were comparing out middle age bulges.

Peter Strzok - Peter was distracted in trying to get all the Lisa fluids off his slacks as she produces a copious amount of fluid and his wife was wondering why their Tide use was was up.

Bruce Ohr - Bruce is Asian and no one wants to question an Asian as no one can understand them.

So now we have it confirmed that FBI Agents do not read reports. They just frame, entrap and have concerns about tummy bulges and sexual fluids.

Messianic Comey also hinted on a subject this blog has been focused on. All of these people who Director Christopher Wray has removed from the FBI, along with the conduits President Donald Trump has fired in James Comey and Sally Yate have been involved in numerous high profile cases in all of the Obama years, before and after the Birther appeared.

It is a fact now that EVERY case the FBI handled and the Department of Justice prosecuted should immediately be set aside and these murderers, terrorists, rapists and pedophiles should be set free, as the malfeasance which has been uncovered at the FBI is not departmental, but agency wide and the Department of Justice has a problem in the entire cabinet position.
There is a cancer upon United States Law Enforcement and it has eaten the foundations of public trust as no one believes in this system any more, as it has been unleashed on innocent people.

The Steele Dossier is not the lone problem. Eric Holder undertook the framing of the Hutatree group. There was the systematic persecution of the Bundy family. The murder of LaVoy Finnicum and the unleashing of FBI moles across the internet shouting down others on threads and calling for the mass murder of these Mormons was beyond alarming.

https://news.grabien.com/story-10-major-fbi-scandals-comeys-watch
May 10, 2017But even before the 2016 campaign, the FBI endured a number of humiliations under Comey's tenure. Most damning were revelations that the FBI was generally aware of almost every terrorist who successfully struck America over the last eight years. Here are 10 of Comey's biggest embarrassments at the FBI: 1.


This is not public officials making mistakes. This is a reality of public officials whose responsibility to research, read, and be aware of every case which comes into their department, completely abdicated what their responsibility was. Nom des Deus, these are American's lives, still innocent lives, who were destroyed financially, lest to bleed out in the snow in Oregon, lives are still in limbo and the FBI did not do the job it was mandated to perform.

The reality is, the FBI framed Donald Trump and his staff. That brings into questions of the Boston Bombing, which inquiry stated was North Korea running a counter operation sting against Eric Holder trying to entrap Pyonyang, and World Net Daily actually posted on this before all of this disappeared and was placed on Chechens, the FBI was grooming and interviewing. No one has any idea in the least what any of these cases really are all because of the Pissgate Dossier and James Comey's absent leadership.

What is even more alarming is this article from Louisiana, in the FBI went on a binge in the final days of Birther Husein Obama to deluge the FBI with Obama fellow travelers. James Comey overloaded the system with Obama political minders. For four years, these people have moved through the system and are in offices across America, using the same, "We don't need to read files" mandate which James Comey and Robert Mueller instituted.

www.louisianaweekly.com/fbi-hiring-as-the-obama-era-nears-end/
The New Orleans office of the FBI is on a statewide hiring blitz. It will likely be the Bureau's last major recruiting drive under the nation's first Black president. On October 12, President Obama will have 100 days left in office. That same day, New Orlean based FBI recruiter Sidney J. Reed ...

Seriously, the Attorney General, William Barr, stated that the bad actors were gone from the FBI. The above headline proves that the FBI and every other agency in America was flooded with profile people, who will do the same things that James Comey and Peter Strzok were engaged in against Citizens.

For that reason, the Lame Cherry advocates that a panel of competitive agencies of Federal Marshal and Border Patrol, begin a systematic review of all hires at FBI, and DOJ, and a review of each other's personnel for political or cirminal misconduct from the Bush and Obama years of hiring, and these agents be terminated, with a red flag that they can never be employed in law enforcement again.
There must be an external affairs review of the entire FBI and all law enforcement as every case the FBI handled is legally void. Once the ambulance chasing attorneys figure out this fact, there will be a deluge of petitions to set aside cases and the Courts will comply.

So this more than a mistake by James Comey and his claiming he was responsible, so now we all can skip down the Obama rainbow road to Oz as no prosecutions are necessary.

Put it this way, if you are Ford Motor Company, and you get an alert as CEO that your F 150's are blowing up, but you don't read the memo, and no one reads the memo, because they trust some engineer will read the memo, but the engineer is Chinese and is more interested in making Chinese cars, that is not a mistake. That is criminal misconduct. People go to prison for 20 years of that kind of crime, and if people die, it is 20 to life.

The FBI has a major problem in character, the Obama Bush lack of character which Robert Mueller and James Comey brainwashed that agency. It is government wide, and Director Christopher Wray has not been forthcoming as he is protecting the system. The only checks and balance solution is an across agency review by other departments investigating and firing problem FBI agents, and those agencies facing the same review. Until this Comey mentality is purged from the FBI and the Department of Justice, in what has been called this CIA disease. we are going to have more US Attorney Cyrus Vance digging into Donald Trump taxes, not because there was a crime ,but because he is digging for a crime. That is not how Justice is supposed to work and the security system in America is broken and is criminalizing people the politicians do not like, that the cartel orders them to engage in a witch hunt to frame.

The Louisiana headline is screaming America has a problem in mass Obama hirings took place to flood the system with zombies who will repeat these same Comey Crimes.

When you are the FBI and destroy people's lives, you do not get to say "mistake" and let taxpayers pay money to the victims, but that is what James Comey expects to repeat again.

I strongly suggest from this point on, that no FISA warrant ever be issued, unless another layer be installed in the House and Senate Intelligence and Judiciary Chairs. If there is not 100% approval of both democrats and republicans, then the courts are not petitioned.

In all of this, Department of Justice Attorney, Stuart Evans, appears to be the only official who read any of these reports and attempted to put a stop to them. No system can survive when only 1 man out of millions of officials is the only one reading a report and saying STOP!!!