The Guilt of a Nation one Feather at a Time 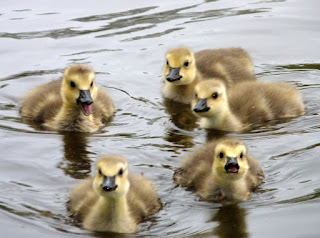 In doing this blog, I exist in the brier patch of real life.

The chain of events which I describe are our lives here and how it is the butterfly wing of global reckoning.

3 years ago, on coming home from town, TL and I rescued 6 goslings, which would have been smashed by a semi as they had just hatched, the parents were taking them across the road, and people are head up their ass stupid.

I picked them up. I intended to take them across the road and be done with them, but the parents were so chased by traffic, that the alternative was for us to raise them.

My intention was to purchase my grandparents farm, prayer to God and have a pond to release them there. Instead satan, people who steal form me here and horrid relatives stopped that from taking place.

The geese were too attached to us, in they flew down the road and sat on it when we left. They would fly over us when we went on walks, and we would have to go herd them back home.

2 eventually left, but the remaining 4 were here. I had them inside last winter as it was too cold, but captivity kills these geese and it was I simply did not have the room because no one was donating.

Yesterday was the last day I saw them alive. They were typical in happy shining bright eyes. Hissing at me, and at times biting my back calf leaving a bruise. This morning all was silent in the pen, of stock panels and the covered lean to.
I knew there was trouble in I found the back ate out of one, could not find the others, but marks in the snow where they were pinned down.
Found another in a back pen, a V ate out of the back of the head.

Tracks showed coyotes and fox. One could not have done this. I have called the ADC and there is no reply as of yet.

This is the chain of events of responsibility which is this world. People are selfish and stingy. They do not like things here and curse me. It all adds up to responsibility in I did good, I did what was right, in even taking care of the mother and being taken advantage of in the other relative all summer, so I did not have time for things here, being cheated in being paid nothing, but the damage is done, as HAARP smashes cold winter onto people to sell heating fuel, but it makes it hard on predators, who have no food, because some President's wife bans fur from the White House, others raise gas prices and the cost of living, by bringing in Visa Vermin to take resources, and it all adds up to me being wore out holding up too many ends, and my geese are dead, because of an entire corrupt people and nation.

There are allot of innocent things dead and suffering in all of this. There will be more as the genocide of a people is not a peaceful thing. I pray for the Lord Christ's return in all the Revelation states, because I had enough hurts years ago and todays is a matter of ruining whatever holiday spirit I was trying to manifest.

So for those whose part in this is still claimed innocent, you are not innocent.

I am so tired of all of this affliction.