Jerusalem Is His Footstool 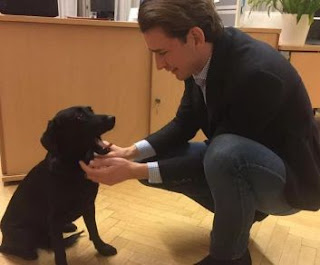 For Austria, Israel's right to exist is non-negotiable, and any form of anti-Semitism, including Israel-related anti-Semitism, is unacceptable and must be severely condemned. Of course, factual criticism of individual measures by the government of Israel must be allowed.


The factional genocidists of Europe are the source of the global wars which have slaughtered millions. The problem is in Albert Pike's vision of the last Great European War, is that it would be a Muslim versus Christian War.

In all of these charges and counter charges of socialists against communists, the anti Christites against Protestants, and Muslims against Jews, there is the reality in this, that in Austria and Germany, with French academics, emerging the fact that the BDS movement is Leftists and Muslims, both immensely wealthy moving to bankrupt the Jews, and it is the Jewish bankers across the world who created the billions of dollars the Muslim terror oil and leftist genocidists possess......and more to the point, the Jews manage the money of thee very groups who are in economic warfare against Jews.

This boycott is interesting in it targets the guild Jew or the rank and file. It is cosmetic and does nothing but allow Muslim terror oil money to flow to European and American leftists, to join this crusade for the ascension of the Philistine.
If one takes this one step further, the reality is, the lands the Philistines are to inherit, have under them oil and gas deposits worth a fortune. These Muslims are not going to develop them, as they are owned by those promoting BDS.

It explains why Donald Trump stole the Golan from Syria, just as Obama through ISIS (the Kurds) stole Syrian oil to fund the deep state. The Golan has a lifetime supply of oil for the Jews and Donald Trump gave it to Tel Aviv without reparations to Syrians.

https://www.nowtheendbegins.com/enormous-oil-deposit-discovered-in-israel-as-russia-slowly-advances/
Oct 7, 2015A huge oil deposit has been found in the Golan Heights in Israel, with enough reserves to last Israel for decades, according to the country's media.


So let no one think in this BDS anti Jewry that there is anything anti Semetic taking place. This is based on the color of GOLD. It is the Ashkenaz elders who own trillions in gold, moving out the Kushner Orthodoxy and Judahites out of the state of Israel for control.

That is what is of interest in this, in the rise of Sebastian Kurz in Europe. The Chancellor is a most interesting person, who was almost taken down by the leftist Clinton Jews of Europe and returned to power, professing the same protection of Jews in Europe and the Holy Land.


Again, this is not about loving or hating Jews, as Donald Trump's pax Juden which Jared Kushner keeps promising to roll out, and it does not manifest because Mosaad took out Prime Minister Benjamin Netanyahu as Benny Gantz tries to drive out religious Jews from the state for Arab terrorists, is that there is an Old World Order rising again in Europe in the Habsburgs, the Crusaders, the right protectors of the Holy Land, while the Vatican was writing up the Koran with Jewish authors to create bastard Islam, as an army for the Vatican to rule Jerusalem
None of that has worked out in these perpetual factional wars, but in Europe, it is not Jews voicing concern and alarm in their being driven out by Muslims and Leftists, it is the conduits of the Habsburg Empire.

The Habsburgs are the rightful heirs to the Holy Land and under Chancellor Sebastian Kurz, they have been moving the tide to gain control over Jerusalem, and it all begins with making the Jews of Europe, the wards of Europe, so military power will be the protector of the Jews in the Mideast, and the group that has it's armies invited in, is the one who gets to dictate who owns what in Jerusalem.


On May 17, 2019, the German Parliament passed a resolution condemning the BDS movement as anti-Semitic and pledging to cut off funding to any organizations that actively support BDS. The resolution, passed by a broad cross-party alliance, stated:


"The all-embracing boycott call in its radicalism leads to the branding of Israeli citizens of the Jewish faith. There are statements and actions from the BDS movement that seek to cast doubt on the right of existence of the State of Israel. Calls for boycott are reminiscent of anti-Semitic positions of National Socialism are unacceptable and sharply condemnable."


The conservative anti-establishment party, Alternative for Germany (AfD), said that the resolution did not go far enough and called for a total ban of BDS activities in Germany. It noted that the BDS movement "has its origins in the anti-Semitic and anti-Zionist initiatives of Arab groups that were already active long before the founding of the State of Israel and that between 1933 and 1945 were in close and friendly contact with the National Socialist government of Germany."

As the above publication notes, Germans in the controlling Christian Socialists and the AltRight of Germany are both joined, with Sebastian Kurz's government for complete protection of Jews in Europe. The Right Wing is protecting the Jews. It is the Left Wing which is once again, joining with Muslims to shove the modern Jew to the abyss.

It simply is an globalist Angela Merkel reality, take Turkish Islam slave workers, add Sunni and Shia oil terror money for bribes, and the gates of Europe were swung open to raping Islamic hordes. Again it was the Rothschild bankers who were handling all of this money, making huge profits, and as in selling the ghetto Jew to the Nazi work camp, nothing of this religious genocide against Lutherans was noted in being replaced by Islam.

Nothing will be noted for the Lutheran of Europe, due to the fact that the Habsburgs are Catholic as is Sebastian Kurz. The Vatican has it's billions in Rothschild banks too, but in all of this the Jew matters, as the guild Jew provides cover for the power move of creating an international capital in Jerusalem, which the Habsburgs will rule from as Holy Empire Rulers.

The Habsburgs, like the Germans were historically most proficient and benevolent empire and colonial  rulers. The Germanics never have the problems the English, Dutch, French and Spanish had with aboriginal peoples. Their colonies thrived without chaos or war, and made profits in a Christendom base rule.

So while this group is "thy Jewish keeper", and have their own interests, the fact is their governments have been far better for the world, than other empirical powers. The United States is a close power as a Republican form of Government in her early period, in creating peace through force and then providing the best benevolent process for civilizing the aboriginals. This of course reflects again, the American People were of the same Saxon race as the Austrian and Germans, in the Scot, Irish and Germanic Prussian and Hanoverian dominating the United States psychological outlook.

The End of a Jewish Presence in Europe?


I am fully aware that Sebastian Kurz may indeed be the anti Christ as nymphs barrage him with, but the reason he is attractive is, he is actually not making genocide on his people nor railing against peoples as these other literal Jewish owned regimes are, and that includes the United States, whose policies are as horrendous as London, Paris and Berlin, all of the Ashkenaz money dynasty.

What follows the anti Christ is horrific, but it is evident what raises this leader from the sea of peoples, is the world population is fed up with the demonic tempest drowning them with their own genocide.

Is it true that King Juan Carlos of Spain is also king of ...

https://www.theguardian.com/notesandqueries/query/0,5753,-1551,00.html
WHILE it is true that there is still a titular king of Jerusalem, the title is held by Otto von Habsburg, not the present king of Spain. It originates from the conquest of the Holy Land by the First Crusade in 1099. Godfroi de Bouillon became ruler of Jerusalem, then his brother, Baudouin, became king proper, on Godfroi's death, in 1100.


The end point in all of this is, the same Rothschilds and Rockefellers who fanned the National Socialist movement in Germany, due to Jewish Communists calling for the genocide of Germany, are once again involved in Muslim oil terror money, funding anti Christite and anti Semite policies, and what is rising is the Habsburg Austrians as protectors for their own rightful place at Jerusalem.

It is by design by the moneyed interests and the immortals, but the world is in the spot of having before it a contest of demoniacs on the left, and a coming anti Christ in the center, as the only options.


He who possesses the Jewish blood, is libel to the deed as possessor of Jerusalem, and therefore the world. 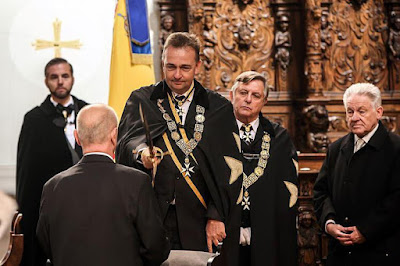