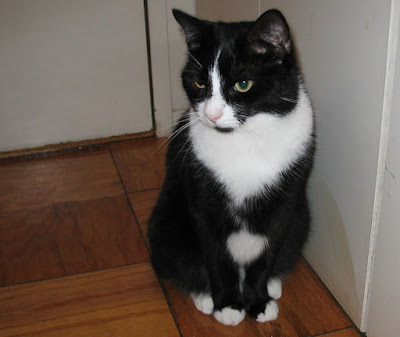 Just ignore me as I am ignoring you.

I know little about Manx cats, the great wild bobcat crossed cats. They are about half wild all the time and sometimes 100% and you never know when it is going to come out. Poot does not like inside the house exercising as it takes away from attention to the Poot. So you get clawed at, hissed at or bit. You never know what mood Poot is in, until it happens.
I have noticed that when TL is there, I get bit more often. If TL is not there, then it is a reality of Poot likes pets, scratches and rolling around being a nice kitty.

Something puzzles me in this cat, and I am not going to figure her out as I do not really want to know. It is the bobtail.

TL calls it NUBS, and with a chorus of Pootie flaps which are the spare tires a cat has or the Nubs, Poot gets them touched and it delights this cat.

The tail though is interesting as it is not there. It is there, as it is always visible, but sometimes when you touch it, it is like a beaver tail in it feels like nothing but that gelatinous thing there, sometimes it feels like it is empty, and just a nub of the tail is there, and sometimes the nub is there and that is when I get to do our past time, as the claws and fangs are on the other end, and I just extend my hand  and rub the palm over the tail bone like a chalk on a cue ball, and Poot stands there enjoying it all.

I have no idea where she retracts that tail to or how it is possible as it spine, but that tail comes and goes, as often as her moods.

When I was really sick with one of those foreign flues this fall, Poot came in and laid by me almost constantly, and almost purred one time, Otherwise this cat never purrs, but she does make the most delightful happy "purt" sounds.

She has been getting better in not extending her thumb claw and hooking it into me. She still does not have it mastered how to take a claw out once it is in, but at least it is not a constant of contact in the thumb claw digging in.

The Poot tail is a morning thing. I knew the thigh had paralyzing spots in it from offensive training, but Poot as a way of finding all the spots as she walks on top of you in the morning, punching her foot into the meat, signalling it is time to get up. There is a progression in this of claws if any limbs are exposed from under the covers, to the last notice if crawling on top of the pilllow I cover my head with, and walking around there, and perching on top.
The cat is quiet heavy when this takes place, and yet there are times when she is sleeping on my legs or chest, that I am not aware of her.

Once it is decided upon that she has won, comes the rubbing of the Nub. I am amazed in how much this cat does eat, that she is not fat. She is always trim and svelte looking.  When I got into my 20's, I started just feeding my pets in bowls, so they always had food. They never over ate. They just ate, were content and none of them ever became obese. I have no idea what these people who have these porker pets are feeding them, but they are not like my experience.

Poot after she got deathly ill, from the mother feeding her the wrong stuff and shitting all over everything until the mother died, has been on a quite good commercial cat food that she likes. The cat eats better than I do, but I think the bag lasts 10 to 12 weeks so that is not too bad. I would post here what it is, but that would probably cease production or cause a price increase and it is expensive enough the way it is.
I will mention this though, we happened upon this brand in a pharmacy of all places. It is around 50 bucks in the farm store and is half that at the pharmacy chain.

Poot is now glaring. TL has entered the room, and Poot is knowing a change is coming in either it will be supper or exercising, which is not part of Poot approved activities. She is better now in having rolled a bit o her side, and is in pretend immediate sleep mode.

I never thought I would be this attached to a cat, but then she is my puppy, as she rarely acts like a cat.