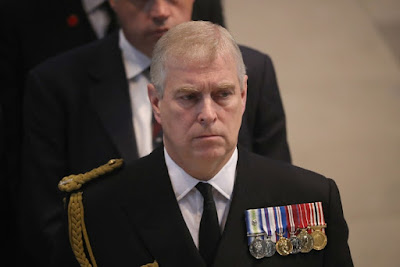 I am Andrew. I am not amused. I am going to kill all of you.

Prince Andrew is having a bad royal month, and that says allot as his brother, Royal Chuck, had like a lifetime of bad shit happen to him and he still is not king.
I mean who but dirty old Chuck could marry a 17 year old Diana virgin, strike those nethers, find out she is nuts, then have Queen Liz have MI6 off her after she got knocked up by an Egyptian, and then allow Diane's bastard polo pony son, Harry, marry a Quadroon with the Queen's blessing.

That is mixed up shit.

Andrew though has had other problems. He was the good looking son. Wore a nice Navy uniform, but married that fat frump Sarah Ferguson, who was used goods, and then she had her toes sucked by rich bald white men. Andrew kind of disappeared after that, with his new friend Jewish Mosaad sex peddler Jeffery Somethingstein.

Turns out Andrew poled two sex slaves and for some reason Jeffrey Somethingstein went soft and did not drop the whores in the ocean, instead Somethingstein got bed sheeted in prison to shut him up.

That turns Andrew to the forefront in someone in Trumpland really hates that bastard and is putting the screws to the English. Probably something about MI6 trying to coup Donald Trump. Whatever the reason everyone is turning on Andrew......and that is after Andrew did the gentleman thing in leaving Buckingham Palace, and wrote a letter to the Queen Mother herself as a show of real class.

That was not enough as that perverted old bastard Philip, who is Andrew's father, has cast Andrew to the wolves. That is one heartless old man.


I don't know what kind of punishment royals get for molesting children as royals used to do that all the time, including sheep in the stall.

That is not to say that Andrew is friendless. He has friends who are upset that the BBC did not bring in a guy with a broadaxe and off with the head of one of his accusers.

The Lame Cherry is always looking to help people, well up to a point in Bill Clinton raped women and I will not help with that, but Andrew just put his penis where Mosaad opened the devil's triangle to. It is not his responsibility how a woman gets into his bed. Women are allot like mints, you don't call down to the front desk and ask if the mint was forcibly put on the pillow.

So I think Andrew needs help, good advice, and in reviewing what English royals are like, and seeing enough in movies, I think Andrew should make a move to be King.

Edward Longshanks threw queers that were shagging his fag son out the window to their deaths. Who was it George that oversaw regicide over his cousins in Moscow and Berlin in  two world wars. You already know about Diana and I am sure there are King Henry VIIIths out there who cut off their wives heads............remember that Charles who dug up Cromwell's corpse and executed it, and hung it on the wall. I mean these royals have oversee the dope trade, international slave trade and want American genocided by their Rothschild Jew bankers. Andrew just needs to reach out and be English as he has every precedent to do so.

Andrew should start at the top. He could whet his feet a bit by waiting for daddy at the stables, when the old man is not running over bicyclists, and stampede the horses over him. Visit the Queen in her grief at nap time and put a wet pillow over her head.

I know that leaves Charles to be coronated, but do a Longhanks and just throw him out of the Tower of London. No one is going to care if Andrew off's his brother and no one is going to want their odd sister as queen, so he has that wrapped up.

Let's face it, the William and Kate faction hate the Sussex duo, so Andrew gets one of his Navy attack helos and flies down and levels their castle. Cremation and burial in one missile.

That of course leaves the problem of William and Kate, who are the next king and queen, and they do seem a bit soft, and the public really like them. Even though Andrew does not have a hump on his back like Richard III, he really has to Planned Parenthood those heirs as there will be those contesting his right to the throne. I say just run over William with a tank, throw Kate over the gun, drive up to Westminster Abby, grab the crown off his dead mum, put it on his head, and announce the to the world in he will do the right thing in marrying his dead nephew's widow, the commoner Kate, and produce a new line of ripping good heirs.

The public would like this, as they like Kate, and everyone wants to shag Kate, and deep down, everyone who is English could appreciate a pervert like Andrew killing off everyone to be king if he got to have sex with Kate.

I am sure Andrew had some kind of children, but no one wants them around, and I am sure Kate would lock them in the tower and they would die on the rack or something, as I think has a good English streak in her to do the Bloody Mary thing.

So the Lame Cherry's advice for Prince Andrew is to man up. Stop whining about crying whores. Stop writing apologies to the Queen. Stop moving out of your home at Buckingham Palace, and just reach out like the goode olde days and regicide the lot and be King Andrew for St. Crispen's Day.

All kind of nonsense in Andrew taking the brunt of Theresa May spying on Donald Trump and the Queen trying to Cecil Rhodes make America a colony again. Andrew was just having sex with women who were forced to have sex with him. I mean Geez Louise, most married women do that and it is called corporate America two income households.

Now granted when Andrew runs down William with a tank, I hope he does it like a joust, It can be fair in William can be in a Range Rover, but it must be done with pennants and things. And when he blasts the Quadroon and Harry, he should fly the helicopter through the smoke and make pretty smoke curls as the English like that poetic stuff. Not much you can do with a wet pillow, but a herd of horses can have at least well groomed manes and tales. As far as infanticide, Planned Parenthood has gussied that up to a real fanfare, so what is just a few more post birth abortions in London.

Oh Charles, see I even forgot about him, no one is going to care that Andrew threw his brother out a window. All they will care about is dressing Kate in a garters and Andrew getting to sex that.

So Prince Andrew has been betrayed by the colonists, the Jews, his royal family and MI6. He needs to become King Andrew and get there the English way, as who is going to stop him? 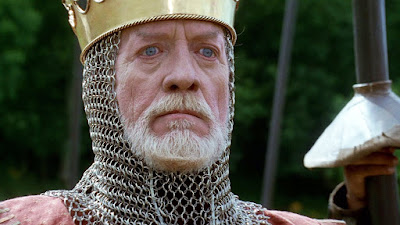 Do it my laddy. Show Grandpappy you are an Andrew off the olde block!