Ruling from the Rubble. 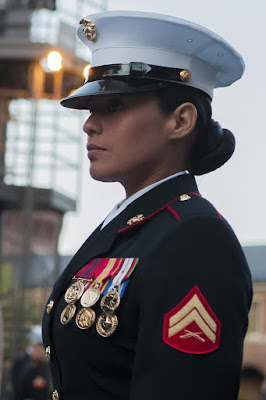 I am a decorated for tampon deployment and effective PMS cycles


My Beloved Uncle, a premier specimen of manhood, always said, "The always said the Marines have landed, when I looked around the Army was already there".

The reason the Marines were adept at beach lands was due to the direction of one man 10 years before the war in pioneering landing craft for island warfare.  Otherwise the "devil dogs" had to fight hard, because of horrid Navy bombardments and poor Marine leadership.

The Marines have always been best at Embassy protection, as in Vietnam their fighter pilots could not hit a thing. Gone were Greg Boyinton and Joe Foss.

The Lame Cherry wills to prepare you for your next lost wars America, as the Marines for some reason have gung ho shit for brains planners who want to fight China and Russia. If that takes place, the cartel which owns American politicians, will seek to wipe out American military strength, along with all other armies so their police state will rule from the rubble.

The Marines have this idea that they are going to float ships close enough to China, where the Marines will then fly into China, and build fighter bases and anti ship rocket batteries, and win against China.

Instead of storming enemy beaches from specialized vessels and fighting infantry battles ashore, the Corps would deploy from collections of cheaper support ships in order to establish airfield for F-35 stealth fighters and fire bases for anti-ship rocket batteries.
This new Expeditionary Advanced Base Operations concept could require fewer than the 38 U.S. Navy amphibious ships than the Pentagon currently plans on building.
But there’s another, arguably more controversial force that the Marines should consider cutting, Walker Mills argued at the Center for International Maritime Security. The Corps’ 24 infantry battalions with their 22,000 riflemen. “There is not a clear role for the infantry in [Expeditionary Advanced Base Operations],” Mills wrote.
One unit in particular should be on the chopping block, Mills recommended. “Currently the Marine Corps deploys infantry battalions to Okinawa, Japan on a rotational basis as part of the Unit Deployment Program.”


The Lame Cherry has these points for the Marines.

Why are the Chinese just going to stand around and allow you to float in, land, build an air base, fly in bombs, fuel, food, water, communications, so you can make war on Peking?

Why are the Chinese not going to sink the 38 support ships, because that stops the Marines from landing?

The next wars the United States will be in, will be fought in 3 days, 3 weeks and 3 months. Concentrating a strike force in a square mile area, means Russia would nuke that firebase and end the fight in seconds. There would not be any need for high tech missiles. A peasant in a truck could roll up to the perimeter and detonate the bomb, and the landing is over.


In North Korea, the United States had overwhelming firepower and few riflemen, as that is what the Marines have no use for. What took place on the Chinese border, was the US forces using 155 howitzers to mow down swathes of Chinese. The Chinese won the battle because Americans were overwhelmed by the sheer number of Chinese targets.

There are now 200 million available PLA infantry in China. More than in Korea, and the Marines have concluded they can land postage stamp bases in China or Russia, that neither the Russians or Chinese will do anything on the landing, or the building of the firebase, nor will the Russians or Chinese destroy the landing flotilla with another nuclear weapon or a hypersonic weapon which hits like a nuclear weapon.

It requires 6 weeks of basic training to produce soldier. Another 6 months of training to produce an effective soldier. Another four weeks of live combat to produce a real soldier. It requires years to produce a combat ship or aircraft, backed by a complex system of fuel, manufacture, electronics and workforce. In wars fought in 3 days, 3 weeks and 3 months, it is impossible for forces as small as the Marines are advocating to replace the KIA's. It is impossible that the Marines are not going to experience casualties or equipment failure.

Unless the Marines have an effective robotic force, the United States will be checked on landing and destroyed in counter attack.

To help this President out, as his Marines are shit for brains, the Lame Cherry has advocated two systems.

The first is NOMAD, a semi mobile sentry weapon's platform, arrayed for 3 mile dead zone protection around any base.

The second is UMBRELLA. Umbrella is an effective battle zone, unlike the Marines head up their ass theory. Umbrella utilizes both Reagan's Star Wars and bomber platforms firing kinetic weapons for security out to 600 miles of a firebase.

The firebase would be offloaded ships on portable peirs. From the peirs, the munitions and men would be flown into a Landing Zone, prepared by satellite and bomber.

From this the construction battalion would produce earth shelters, covered trenches and landing fields.

From this, projections of power would be conducted in SHROUD, the use of fighters.

It is understood in this, that the F 35 is stealth and that is worthless, as are fighters in these zones. The correct deployment are Warthogs flying kill operations, using less fuel and more non radar target engagements. (They kill wetware.)


This system provides at least a nuclear survival base in earthworks. It is operational in 12 hours from first landing. The main support is high altitude platforms killing enemy concentrations mounted to engage the firebase.

Either this President begins the Lame Cherry method of 21st century combat or the United States will win a war by hybrid nuclear biological weapons, with the world in a grave and not an army to fight. The time window in this is short, as this President's Visa Vermin are creating a race of fat lumps joining fat lumps who will never be soldiers, and worthless as fodder. Buttfucking is about their only purpose to Chicom and Russian soldiers.

This once again is the Lame Cherry in exclusive matter anti matter, preparing you for defeat.