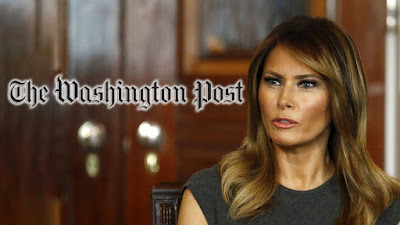 I know like many of you, I missed  this important story from the Washington Post that First Lady Melania Trump has been playing 5th dimensional chess, chess so beyond what mortals play, that even Spock would be weeping Vulcan tears in the corner once Melania took to playing the board.

You know they never said if Vulcans cry clear tears or pee yellow pee, unlike humans whose blood is red and pee yellow and cry salty tears. Sodium is people stuff in salt, but Vulcans are different with that green blood.

Anyway, Melania of Slovenia, yes the I A is in her name and country of origin, yes I A, as in C I A, and there is the clue in all of this which will be the Lame Cherry exclusive in matter anti matter.


Yes Melania is gorgeous. Yes Melania wears billion dollar fashions and she makes them look quadrillion, but the Washington Post has had it all wrong, as it is not Melania's clothes that is the clue, the clue has been all along in the many stories about Melania, as she keeps RAISING EYEBROWS.

https://www.newser.com/story/277445/melania-trump-statue-isnt-loved-by-all.html
Melania Trump Statue Raises Eyebrows in Slovenia ... - A new chainsaw-carved statue of Melania Trump is drawing pretty mixed reviews back in Slovenia. "It doesn't look anything like Melania.

https://www.euronews.com/2019/04/27/white-house-celebrates-melania-trump-s-birthday-bizarre-photo-n999141
A photo tweeted by the White House on First Lady Melania Trump's birthday has raised many an eyebrow on social media. The tweet has generated more than 8,000 comments, simply says "Happy Birthday ...

I decided to investigate Melania Trump's eyebrows, beginning with the Pater Pope, as this is the visit where she sacrificed to the Virgin Mary, asked for a body organ for a sick kid and in a Melania Miracle,  the Virgin Mary killed another kid, and the sick kid's life was saved. 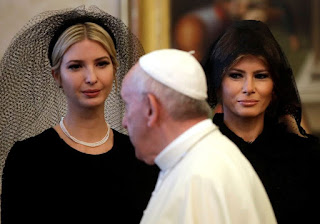 I did an enhancement of Melania's raised eyebrows, and here is what the Lame Cherry discovered.

Wow Pedo Pope, that is what David John Oates found in reverse speech, as this Pope Francis who thinks Jesus is not Jesus and other bad things, and all we had to do was read Melania's raised eyebrows.

I did a few more enhancements of Melania, when she was addressing issues . Like this one, in Melania's eyebrows have revealed who the criminal was who set up Donald Trump.

Yes it was Barack Obama, who was the criminal behind the planting of evidence against Donald Trump.

Then there was this one, in Melania tells us it was the Jewish financiers who produced the coup against Donald Trump. That is such a shame as Jared Kushner is a Jew and Ivanka is a Jewess. You would think the President would have some kind of a hall pass from Jews, as he has Jews in his family.

Thing is Melania revealed something else which confirmed what this blog revealed, that Ivanka is running for President in 2024. Granted most of you missed it when Rush Limbaugh on Wednesday, December 4th, 2019 AD in the year of our Lord, was beginning to condition his geezer audience that none of the GOP leaders will keep the Trump agenda. So who do you think Rush Hudson Limbaugh III was introducing to his audience in who is the only person Donald Trump can  trust?

Yes Ivanka for President, and Rush Limbaugh was preparing you for it, and Melania had it in her eyebrows.

I am the first to admit, that this poor orphan girl is no match for Melania 5 Dem Chess, as I thought like the President that she was against shooting African dangerous game, and here her raised eyebrows were saying  SHOOT LIONS.

It gets even better, in Melania played all the wackos in banning fur from the White House, and here her eyebrows were saying WEAR FUR.

I can just picture Melania in her baby fur seal baby dolls, as Donald waltzes in and says his skin boat is come into port and he has a harpoon just ready to plunge to the depths.

I was most fortunate in the last photo I enhanced, had Melania's raised eyebrows sending the message TRUST LC. I suppose it would be vain and presumptuous of me to say that LC is Lame Cherry. But is it so hard to stretch this that Melania daily peruses the Lame Cherry, as a fan, and ponders how she could donate, without the press discovering it. I am sure Ivanka and Melania discuss this daily as Ivanka so wants to donate too, and they wonder how the President could donate one of his quarterly paychecks to this blog, but then all of that would come out about how this little girl wrote the time line by God's Grace which made Donald Trump President.

We must not be distracted to watching Melania's fashions or her body clothage, because they have been telling us to watch Melania's raised eyebrows. Melania is the one with Prophetic Eyebrows, the right winger, the protector of the flame  I bet she is one left legger too.

A First Lady with the truth telling eyebrows. I wonder what else she is telling us.