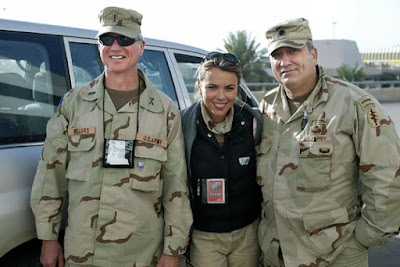 The DIA has heard the whispers who set up the gang rape of Lara Logan.


I was never supportive of the British version of Lara Logan due to the fact she was another in a line of leftists coming to America to give all the reporting that anti American feel. I simply stopped paying attention to this woman in her time in Afghanistan, where I believe she was injured, and filed her away as more cartel propaganda.

Logan was though connected in Islam and could embed herself in situations, and that is what was interesting about the events in Egypt, which led to her being gang raped by Obama Muslims.

In the time line of this lead up, Obama had visited Egypt, wearing his infamous "Muslim beard" and set forth an Islamic policy which the Nobel Peace winner would unleash to become a losing war in Afghanistan, a new murderous war in Yemen, the genocide of 500,000 Syrians in a oil theft war, the looting of Iraqi oil for Turkey, the mass murder of Col. Khadaffi in Libya with his government, and the putting of Egyptian President Hosni Mubarak in a literal cage to try him for crimes in Egypt.

For the record in this Mubarak and Khadaffi thought of Obama as a Muslim son, and what Obama unleashed on them was Mohammedan brutal.

Reminding readers, the troll George Noory, just happened to have a correspondent in Egypt the night that Obama lit the revolution there for his Coast to Coast listeners. Noory gushed about the Muslim revolution and fittingly, one Danien Brinkley was on hand to present Noory with an Obama award in which Noory and his cast gushed over, and as Obama things melted down was never mentioned again.

While all of this Obama revolution was taking place, a reporter named Lara Logan was on the streets of Cairo, where there appeared a brutal mass of Muslim rapists who repeatedly raped her, beat her up and would have murdered her by sexual assault if Egyptian women had not intervened and saved her.

Readers are reminded in this of an exact replica event in Benghazi later, when fag Ambassador Christopher Stevens who had no business being in a Muslim land, without protection, was captured and raped to death by a Muslim mob, while 3 other Americans were murdered.
Obama did nothing to intervene in this hours long terror assault, because Stevens was in Benghazi attempting to retrieve weapons which Obama had shipped to Syria for the genocide there, which Obama unleashed in vicious attacks, after the visit of his personal ambassador, threatening Syria's government.

This blog upon the attack against Lara Logan, mocked in satire the events, because the Obama that Logan trusted in, was not her messiah, but was her pimp. I have no concrete information as to what Lara Logan did to offend Obama, the Queen or what information she came across, but that rape mob in Egypt was sent out for her, it was looking for her, and in the Obama CIA overthrow of Egypt's government, this was an intelligence officer who set this in motion, all to make an example of Lara Logan, and shut her up.

Logan when she got off the post trauma of the situation, began reporting again, and in that reporting touched on other subjects which the Obama Clinton regime were in full cover up mode. There is interest in this as New York Magazine and their well rewarded reporter targeted Logan with a sexist piece, which smacked in the anal rape of Christopher Stevens the "bombshell rape of Lara Logan" as that is what they called her. The piece was sensationalizing rape and in this piece, it was once again being promoted through intelligence circles of the Obama regime, in the same way that Sharyl Attkisson was being targeted in noting her computers were turning on and off, in she was reporting things which were not up to Obama standards of propaganda to glorify him.

Those are patterns, the same patterns of Barack and Michelle Obama, Val-erie Jarrett, Susan Rice, John Brennan and James Comey framed Donald Trump. While the FBI was unleashed on Trump, readers need to be reminded that when the Polish government was mass murdered in a plane crash on the Russian site of Russians mass murdering Poles, Obama did not send in the FBI. When Lara Logan was gang raped, there was not the massive response of the FBI to find the Obama rapists. Obama Inc had it's fingerprints over major events, and it was all covered up and the FBI leadership was not raising a magnifying glass to find out any information, when it is always sticking it's nose in all over the world.


CBS retracted the 60 Minutes report after government officials and the smear group Media Matters launched a campaign to discredit it. Government officials took issue with a claim by one of the men Logan interviewed who they say gave false information: he stated he was on the scene during the attacks when he allegedly was not. (However, the government officials who challenged the information did not provide Logan with any documentation proving their claim.) Logan apologized publicly for making a mistake, but said it did not impact the heart of the story, which remained true.
Logan’s lawsuit claims Hagan’s article was “intended to portray Logan as a dangerous and untouchable and incendiary reporter” and that it included false statements. One of those allegedly false statements referred to Logan’s rape at the hands of an Islamic extremist gang while on assignment in Egypt as simply a “groping.”


For Lara Logan's sake, as she was raped and destroyed by the Obama regime in her career, I would that Attorney General William Barr would appoint a John Durham US Attorney to investigate this, as in these patterns which led to Donald Trump, there is the same Obama stench ruining people's lives in the most horrific ways, for a cover up of something which never seemed that important.

None of this will change anything which was assaulted against Lara Logan, but this is the kind of sadistic 3rd world evil which is employed to terrorize people into silence.

In Logan's case, it could be anything from not giving head to some lezo official, not braying about Obama enough, to actually telling the facts of a story, instead of the talking points handed out by Obama, which was a constant dispatch liberals fawned over in the same words being daily in the same reports.
For a woman to be gang raped by Muslims, as much as a fag male to be gang raped by Muslims, to send a message for people to keep their mouths shut, is pure evil. Regrettably that needs to be stated, as everything changed with messiah Obama, as the third world ejaculated itself over the first world.

Look for the answers to why Logan was targeted in her statements after her rape heaping scorn on Obama Inc of the pandering Obama, Clinton and Brennan of terrorists.