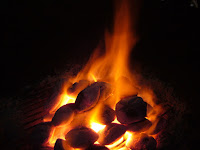 
Here am I, the poor orphan girl, about to present you with something, but here am I not about to tell you what that is. I know how most of you speed read and bail on the Bible things, but in this is a mystery which will make all the difference in your lives.

I will state this, that maybe if you pray to the Father, for what this is and if you are mature enough, you may have it revealed to you what this is. I do know what it is though and in experience, have reached some conclusions as I continue to study this.

6Then one of the seraphim flew to me, and in his hand was a glowing coal that he had taken with tongs from the altar. 7And with it he touched my mouth and said, “Now that this has touched your lips, your iniquity is removed and your sin is atoned for.”

Someday by God, you may be enlightened to what this is all about. I have suffered, been orphaned, impoverished, sickened and wanted out of this earth, before I was Inspired to this.
Not handing the keys over for free.