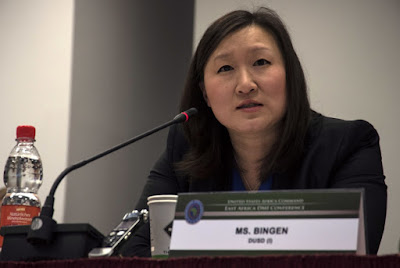 As Another Lame Cherry exclusive in matter anti matter.

With all of this impeachment of Donald Trump diversions taking place, there has been a continued invasion of the United States legalized by John Kelly when he ruled from Homeland. The looting of the United States by Steve Mnuchins comrades, and as this blog has sounded an alert, a cabal has seized power at the Pentagon, and they are thinning out the ranks in centralizing power.

Her announced departure follows three others within seven days: the Dec. 12 notification that top Asia policy official Randall Schriver would leave after two years on the job; the Dec. 13 announcement that top official in charge of personnel and readiness Jimmy Stewart had resigned after a little over a year on the job; and on Tuesday Defense News reported that Defense Advanced Research Projects Agency leader Steven Walker will leave in January for a private-sector job.
Those four vacancies add to a number of openings within the Defense Department, with six of the 21 deputy assistant secretary of Defense policy jobs still empty. Several other roles are filled in an acting capacity, including chief management officer, comptroller, deputy undersecretary of Defense for policy, and assistant Defense secretary for international security affairs.

The only reason for engaging in this type of cabal is an initiated war against the Eurasians or against the American people, or both.

Remember it was the DIA which promoted and protected Donald Trump to deliver him to 1600 Pennsylvania Avenue. That group as cover has been neutralized.

This is by design and not coincidence.

There is a coup taking place in plain sight, in key Pentagon positions are empty to centralize power or manned by those not vetted.

https://usawatchdog.com/21-trillion-missing-u-s-government-a-criminal-enterprise-catherine-austin-fitts/
Oct 1, 2017Investment advisor and former Assistant Secretary of Housing Catherine Austin Fitts says you can add $21 trillion of missing federal money on top of the $20 trillion U.S. deficit. It's all in a new explosive report on Solari.com. Fitts explains, "This is $65,000 for every man, woman and child resident in America.


Just keep watching the diversion of impeachment, because there is a real coup not being implemented, but is implemented, and this little girl is the only one who is pointing it out.

The question is now for the rich. When the confiscate all that money you think you have in your portfolios which you did not donate to the Lame Cherry, do you think you will fare better with God with me having a favorable feeling about you or my telling God what bastards and bitches you are?

You think the clock is not ticking, in there is a half life to this money, weaponry and your replacements? This is a horizon point event.

https://www.youtube.com/watch?v=fHDNWf_ws38
Nov 11, 2015Sugarloaf was an American rock band in the 1970s. The band, which originated in Denver, Colorado, scored two Top 10 hits, with the singles "Green-Eyed Lady" and "Don't Call Us, We'll Call You".