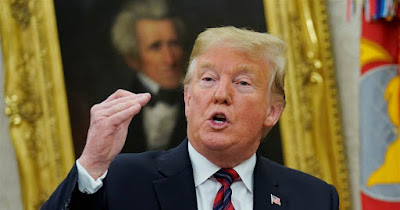 In the letters to the editor of the New York Times, there is a praise for the impeachment of Donald Trump.  Some of the letters are in praise of the Times editorial board demanding that Donald Trump be impeached according to Chairman Jerry Nadler's committee asking for indictment, on the charges that Donald Trump blackmailed Ukraine to have Joe Biden investigated for being crooked.

In the end, the story told by the two articles of impeachment approved on Friday morning by the House Judiciary Committee is short, simple and damning: President Donald Trump abused the power of his office by strong-arming Ukraine, a vulnerable ally, holding up hundreds of millions of dollars in military aid until it agreed to help him influence the 2020 election by digging up dirt on a political rival.


I was thinking of Presidential powers. I was thinking how Joe Biden admitted that he blackmailed Ukraine, along with Barack Hussein Obama, in order to shut down investigations in Ukraine of the Obama Biden regime.

I was thinking about Presidential powers, in how Barack Obama and Hillary Clinton started bombing Libya, because Colonel Khadaffi was looking to free Africa from the Dollar Debt, and how in this Obama and Clinton had Khadaffi and his 50 followers murdered, in Khadaffi was shot in the head by a French intelligence officer.

I was thinking about Libya in Benghazi, how Barack Hussein Obama and Hillary Clinton used Khadaffi's murder to ship Libyan arms to Syria to slaughter 500,000 Syrians, in a Civil War which began when Barack Obama's Iraqi diplomatic appeared in Damascus and Syria refused to hand over it's oil to Obama.
In Benghazi, sodomite Ambassador Christopher Stephens was murdered with 3 other Americans, in the Obama cover up, of those munitions shipped to Syria for Obama terrorists.

The New York Times and Trump haters were all silent when it was Obama Biden Clinton mass murder and blackmail under Presidential powers. As this group has moved to indict and convict Donald Trump, then let us have all of these past crimes by other Presidents indicted on criminal charges.

Jimmy Carter by Zbigniew Brzezinski creating Muslim terrorism to attack the Soviet Union but created mass murders around the world.

George HW Bush, attacking Panama and arresting their leader in a bloody overthrow of the dope trade the CIA and Mosaad were running out of Panama.

Bill Clinton annexing land in Christian Serbia in a murderous war, for Kosovo Muslims, for an oil pipeline out of Asia.

George W. Bush, starting a war with Iraq, because his father, said it was a stepping stone to get Iran, when Iraq had nothing to do with 9 11.

So what is good for the Donald is good for the gander. Let us look into this, and let us investigate those in Congress who enabled these murderous policies in zero congressional oversight.

This blog warned you that Nancy Pelosi would keep digging and have a vote to indict Donald Trump before Christmas. That is exactly what is in process.
It becomes even more ridiculous in democrats are now issuing statements that they can not trust the American voters in November of 2020.

Slotkin wrote in a Monday op-ed for the Detroit Free Press that while she previously did not join her party’s calls for Trump’s ouster, she believes the evidence regarding the president’s dealings with Ukraine are too much to let voters decide Trump’s fate in November.


Indict Donald Trump, then the DOJ must indict the former Presidents whose crimes all included masses of people dying.