The Best Beatles Rif Ever 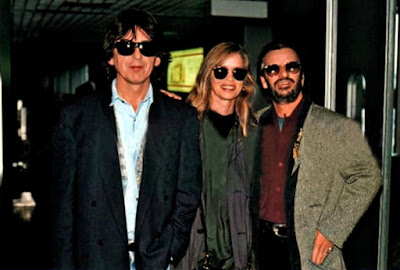 What I am about to write is going to sound condescending, but it not intended at all, for the most talented Beatle was George Harrison and the least talented was Ringo Starr.

Ringo Starr could barely play the drums, His first venture at singing was Buck Owen's Act Naturally.
Richard Starkey though was genuine. He was the biggest victim though of John Lennon and Paul McCartney's drug addictions.

https://www.youtube.com/watch?v=anpjEN9KeJ0
May 5, 2010Decades later, he admitted that the song's producer George Harrison "co-wrote" the song (as he did with other hits such as "Photograph"). ... Ringo Starr: It Don't Come Easy (Starr, 1971) YouTube ...

Lennon produced nothing after the Beatles. McCartney's parade of work sounded like bad Fleetwood Mac on trash cans on synthesizers.

Harrison would pre produce My Sweet Lord which revealed his genius and established him worldwide as the true talent of the Beatles.

Harrison though would follow for Ringo Starr, the best rif of this group of artists and fittingly, it would be the humble, Ringo Starr, who could not sing, who would propel this co creation to another zenith.
Lennon or McCartney never wrote anything close to the melodic chords of It Don't Come Easy. The Beatles were all four note simplicity that Brian Wilson of the Beach Boys was perplexed as to how anyone could ever think what the Beatles were doing was music of any value.
Wilson was correct.

....and then came George Harrison with It Don't Come Easy.

It Don't Come Easy is not a Stairway to Heaven, which McCartney was always trying to mirror. It is not as nuance as Cliff Richards in Devil Woman. It was though the best Beatles rif, because the Beatles never had anything to do with it, because it was all George Harrison and Richard Starkey.

But the fact is, no matter how talented or good George Harrison was, if he died in eastern paganism and not in Christ, he is not in Heaven with the eternal God, for he chose that which is not eternal in spirits not God and things of this world which have an end, as he had an end.