The Jew on Jew War in America 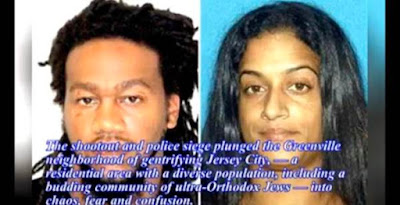 I am fascinated by the cover up of the Kosher Deli shooting in New Jersey, which has Jewish propaganda, exactly as in the holocaust, laying down a false narrative against Jersey residents as they did Germans.

What is of interest is the shooters, they were Black, but that is not the whole story, as the whole story is a fantastic twist on 19th century Jews in America who believed they are the lost Jews of Africa.

Jersey residents were caught on digital screaming abou the F*cking Jews being the cause of this.

What the Lame Cherry will do, as this blog always does is open your eyes to perspective, instead of propaganda, as what took place in Jersey and being focused on by Jews in the press, as other Jewish places being shot up, is hiding what is causing the shootings apparently as it is not about Jewry.

The community in New Jersey the center of this violence is a Black neighborhood. Due to high democratic taxes in New York, orthodox Jews or Hadisics have been moving out of Brooklyn and into New Jersey.

Many of you reading this are in areas where Californians moved into your Reagan State communities. You remember just a few years ago, that houses were 15,000 dollars, and now they are 150,000 dollars, because Californians sold their 500,000 dollars homes and moved to rural areas, and drove up inflation, so the locals can no longer afford anything.

Put it this way, if a Brooklyn brownstone goes for 1 million dollars, and a New Jersey home goes for 150,000 dollars, but Jews move in and start paying 300,000 dollars, suddenly inflation sets in, real estate taxes go through the roof, and Blacks start getting pushed out.
Most of you are not old enough to remember the LA Riots of the 1980's. One of the main factors in those riots was Korean business people moving into Black neighborhoods, not liking Blacks, and pushing Black people out of their own communities.

For all the propaganda that Jews are great neighbors, Blacks were screaming about Jews and blaming them for these shootings. 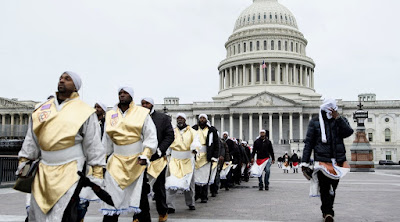 David Anderson and Francine Graham were Black Hebrews. They belong to a group of emancipated slaves who believed in a misguided doctrine that Africans were the tribe of Judah. In this same period, scholars in America were theorizing the American Indian was of the Lost 10 Tribes too. This validation produced a racial religion which hates Whites and condemns Jews as imposters, as the majority are Ashkenaz Asians.

The Black Hebrews are quite vocal in protesting on street corners, and as the Jersey authorities have not yet dared to publish the real reason behind this shooting which this blog has laid the framework for.

Consider the psychology of this. Blacks in a New Jersey neighborhood have their community, and in it are Black Protestants and Black Hebrews, no problems. Suddenly there appear Hadisic Ashkenaz Jewry, who have their superior Jewry and closed community. 100 of these families buy up the neighborhood and start displacing the Blacks, and making them feel not at home in their own neighborhood.

Add to this David Anderson, who is part of a group who is very adamant they are the real Judahites.  It is logical this conversation took place, was heated as the New York Jews became condescending with a group they view as a cult and not real Jews. That kind of invalidation, would produce the kind of identity attack at a kosher establishment.
Reports stated a Jewish day care was close to this site and so was a synagogue. The Black Hebrews chose the kosher business, because this was the same issue of Korean businesses, in it was outsiders making Blacks unwelcome in their own community.

The propaganda runs "a tight Jewish community", that translates into prejudiced and exclusive against Blacks. In forensic psychology, there was a Hadisic inside that deli who removed these Black Hebrew's validation as Judahites, and not having this identity, firearms were employed to empower the Black Hebrew. In projection, the Police officer killed in this exchange was deemed an extension of the rich Jewish supplanters, in taking their side over the Black community.

This story is interesting for these facts, as this friction is taking place across America. Lutheran Social Services is moving Mexicans into Reagan States, as are Catholic, as are Jewish charities, all making money off of human traffick in the Obama Bush federal money flow.

Democrats in California have displaced rich Californians across the American west, ruining states from Washington to Colorado to Missouri. New York Democrats have ruined Connecticut, Virginia, North Carolina and Florida, as rich New Yorkers have become the same problem that foreigners have.

Does anyone group have the right to move into an American neighborhood, an Arabic neighborhood in the West Bank, a German neighborhood, and by economic force and organized pressure, make the resident peoples feel unwelcome?
The term "diverse community" is celebrated, but how diverse are the Hadisic in New Jersey, the Jews in Arab lands or Muslims in German towns? Do the Hadisic spend money in Black restaurants in pork ribs and fries? Are Jews in the West Bank going into business with Arabs? Are the Muslims in Germany going to Lutheran Christmas services? The reality is the prejudices of those moving in are ruling, because the police state is protecting the settlers as they have the money.

Where are the sensitivities for Blacks, Arabs and Germans in these areas, as the resettled groups play the victim.

Now you know why the Truth is not being published about this shooting in Jersey. This was caused by New York liberal tax policies forcing people to flee New York. This is caused by New York liberals importing so many rich Muslims that they are terrorizing Hadisics in New York, who are going to less value New Jersey displacing Blacks, as the Jewish regime in Tel Aviv just kicked out Orthodox Jews as they do not want them in the state of Israel.

This is about lack of Jewish sensitivity to Black communities, as they are not displacing Whites, and would not dare try to push Muslims out of their communities. Blacks are the low rung on the primate pole.

This is about what Jewry is, a closed sect of sects within sects. The socialists in Tel Aviv want the Orthodox out of Judea. Then you have Rob Reiner the Anti Christite sounding all Nazi against Protestants and Donald Trump. Then there are the Orthodox who run other races and religions out of neighborhoods by economic pressure. All have a pecking order in disliking the other, as much as they detest the goy.

100 Jewish families flow into a New Jersey town. That probably brought in close to 300 million dollars in investments and deposits. Politicians like that and the police are told to really protect that interest.

The solution was to kill David Anderson and Francine Graham. What no one will touch in this, is these two Black Hebrews were reacting to the same actions that Nazis were in communist secular Jews were displacing Germans in the 1930's. It was more open in they were calling for the end of Germans and Germany in that period in the press.
The final solution in Germany was to slaughter 11 million Lutheran Germans in war, and blame the Germans to this day. What is taking place in America is the genocide of Black and White Protestants to replace them by 2050 with tan skinned peoples who are Jesuit socialists, Muslim socialists and Hindu socialists.

The Black Hebrews went fast. The rest of Americans will be slower in various methods from suicide to aborticide to other displacements on this Cherokee Trial of Tears.

I will bet that Mark Levin will not cover this story or any of the other Jewish media owned pundits in Sean Hannity.

This is a most fascinating story and it is only being revealed by the Lame Cherry, once again in the matter anti matter of exclusives.