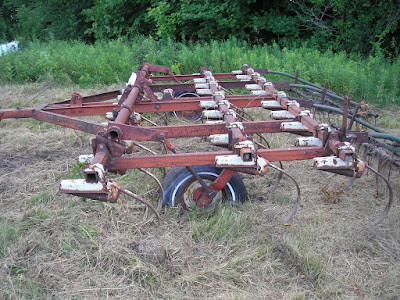 The American genius was once celebrated but it is no longer as such, as the globalists in charge do not want White Christian Americans to realize they are a superior breed of primate.

I rarely mention the things I need, as that tends to make them collector's items or the price to go up and I can not afford shit in rich people not digging into their swipe cards and making donations. Here am I though about to violate that, as with TL's agreement, we made for us what is a major purchase, in the greatest invention in American in the past 50 years.

And what is it? It is an International Harvester Model 45 Vibrashank Digger.

Before the Vibrashank, there were these things that sort of scratched the surface of a field and were called diggers. The Vibrashank, which is self  explanatory is a chisel tooth, which is held in place on a massive coil spring like a shock absorber, and the effect is that by calibrating a hydrallic cylinder for depth, you can almost dig 12 inches down, and the teeth stay in the soil, because of the springs.

My dad instead of the spike teeth, used shovel teeth like on a corn cultivator. That 45 we had was murder on weeds and dug the hell out of the soil. The 45 was like going to the moon to people riding in ox carts.

Regrettably, most of these American inventions in the Bush and Obama era of Monsanto, were scrapped. The magnificient American steel was scrapped by bone pickers who sold it all to China to be smelted down to inferior metals, as  Agribusiness now created  these no till contraptions that only sliced through the soil, and left duff on top, which in  turn was sprayed the hell out of by Round Up and is giving people cancer. The International 45's were the greatest destruction of American agricultural since the brown muzzled wagon horses which you used to see on westerns were wiped out for tractors.

Our 45 is something I paid too much for, but as on Craigslist I would end up paying 200 to 300 dollars to ship the thing, it was about the average. One tire was blown, on is not in good shape. I have to eventually replace the  spike teeth for shovels, the other tire for 65 bucks, but today TL and got this thing home as we pulled it 15 miles behind our old two wheel drive GMC.

This was after 5 hours of work in two different stops. Someone in the evil in this world did not want us to have this digger as I have wanted one for years. We now have one for our garden and for our land which will come, and this equipment will farm when all the Monsanto crops cease to be.

I still am going to become rich and pick up a couple more 45's, but time is running out on them. I am really upset these fine implements were all destroyed like Americans sold off their steel to Japan which it used to bomb America in World War II. That debt will come again in how stupid Americans are in scavanging themselves to their great harm.

I am exhausted though in jacking this digger up, making it behave in engineering dynamics as it did not want to play. Resistance is a bitch in this when evil people with money are arrayed, but each day that passes all resistance is passing.

Now I need a tractor to pull this thing for the garden, but we have the base structure and am thankful it pulled home at 15 miles an hour as 20 made it bounce, and the roads were such shit in the flooding it hammered the GMC's bumper to hell and back.
I was pleased I did not knock off some farmer's mail box in pulling home and did not meet more than one dipshit on the road.

Our 45 is home now. The owner was in the nursing home, as I  talked to his son who said his body is not working, while his mind is. He thanked me for talking to his dad in including him as it made him feel worthwhile yet. When the rich get off their asses, I will make the old guy really feel connected as he does have a wheel rake, a mower and an 806 which would pull this digger.

It is though the foolishness of Americans. I have the greatest invention in the past 50 years now, and no one knows  about this thing, which was manufactured in Canada and for some reason American farmers had their heads up their asses and still do. I can understand that as farmers need to be told what great things a 45 are and then they would horde them like golden testicles.

We have our implement now in the perfect platform. She is home and I praise God for her. Thing is this thing cost what rich people piss away on primping and pissed to the wind. I have American steel, shanks and springs which will last 1000 years. Yes this is a Reich Digger and Americans have dug their own graves by junking them to communist Chinese.


So get off your asses and donate you rich bastards as you are going to have to eat someday if you are not shitting blood from nuclear fallout, and it will be my digger, raising old crops which will feed the remnant, and all this other Monsanto shit will be rusting under the weeds.