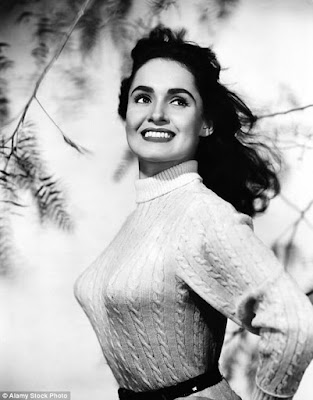 The Hills are alive with the sound of Buzzing

To think this all started out in actor Chuck  Connors, having sex with an earless Gypsy girl, but more of that in another month as in degrees of separation, we arrived at the saga of Susan Cabot AKA, a Jewess born, Harriet Shapiro, of Russian lineage.
Natalie Wood was the same Jewry. Those Jewess of Russia are most beautiful women, and all seem to meet unfavorable ends.

Shapiro had a not so nice Jew beginning, as I would think with the Rothschilds and Schiffs owning all the money in the world that there would not be any poor Jew orphan girls, but Harriet was one, and grew up in eight foster homes. Yes it was very sad and disquieting.

She was a determined little girl though, as she graduated, worked and illustrator and a singer, and made her film debut in 1947 for Columbia and Universal studios. Her final film was in 1959 in the 63 minute The Wasp Woman, a saga of Wasp Royal Jelly placed in cosmetics, where beautiful women were turned into wasps.

No Marvel Comic about that. but I suppose it would be lesbian now or Samuel L Jackson would be now cast as Wasp Woman 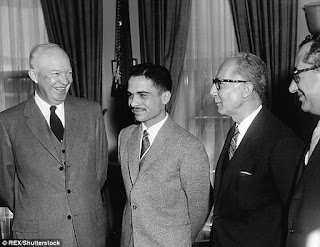 How about a little Jew pussy to put some starch in a Muslim pecker...


For most that would have been a full life, but not Wasp Woman, for she was next cast by the CIA, via Howard Hughes CIA minder, Bob Maheu to find a sex partner for Muslim King Hussein of Jordan when he was in America.
The Jewess was told to boff the Muslim, but she thought not, but came under his spell anyway and the two developed a romantic affair.

From this, a child was born Michael Roman, a little person, a dwarf, a midget, who looked a great deal like rock legend Billy Squier.

Somewhere in this in 1986, Harriet had become depressed, suicidal and lived in old newspapers and a rather unkempt house.
The son Roman, had taken steroids, and rocketed to the stately height of 5.4 inches tall.

Meanwhile back in 1986, December 10th, the police arrived at the newspaper home to find Harriet covered in blood and quite dead. Apparently according to her son a Ninja warrior had knocked him out and murdered his mother.

The story changed again as the son had hid a weight lifting bar in the clothes hamper, which he had used to blugeon his mentally ill mother to death with. The key word in this is repeatedly.

In any event, the new story was the mother had awoken screaming for her mother, and when the midget had tried to call 9 11, she had picked up the bar and a scalpel and tried to murder him. He claimed he did not remember what happened now,  and in this beat his mother to death.

The midget art student was arrested and charged with Second Degree Murder. A tearful son told the court his mother was special and that he loved her. 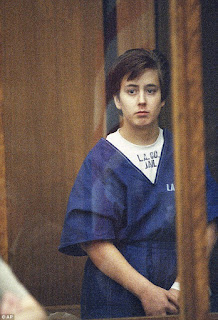 Have mercy on me as I am an orphan Jewish Muslim


Somewhere in this tears are golden as second degree was requested by the prosecutor to be voluntary manslaughter, which the Judge, a woman, reduced further to involuntary manslaughter.
If Roger Stone had a Robert Mueller like this, he would have been King of Florida after trial.


Roman was initially charged with second-degree murder. But in closing arguments, the prosecutor, Deputy District Attorney Bradford Stone, asked Judge Schempp to convict him of a reduced voluntary manslaughter charge.
But Schempp went further, convicting Roman of the even lesser charge of involuntary manslaughter.

Things in California were most understanding as  the prosecutor was instead the defense attorney, who just said the midget snapped, and that was ok.

'I still get the gut feeling that he just snapped from the stress of living with his mother all those years,' the prosecutor said.


So when you are the son of a Muslim King, beat your depressed mother to death, you get rewarded with 3 years probation.....but not so much a reward as the midget apparently no longer received the 1500 dollars a month the King was sending as child support for Harriet Shapiro to live on.


I really think that Joaquin Phoenix should star in this movie, as it is quite believable in a Jew girl, is hired by the CIA to have sex with a Muslim King, has a midget baby, who takes steroids to grow up as he studies art, and then beats her to death with a barbell.
Apparently it was either blackmail or incompetence to hook up a Jew with a Muslim King, but then it paved the way for Hillary Clinton sending in a queer to Benghazi in Chris Stevens to be ass  raped to death.


Look I am all for an understanding police state. I just would like it to appear a great deal more than the Robert Mueller kind or what Ben Shapiro lynched that Nikolas Cruz kid with in Florida.

Odd though how the prosecution did not realize that growth hormones might have spiked aggression in the kid, as it did in football players, but then that was not until later in court defenses of million dollar athletes.

Muslims, and Midgets and Murder, Oh My.........we are not in Kansas anymore Toto.

To Sex a Jewess