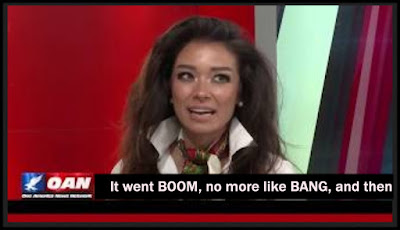 The Lame Cherry begins this exercise in removing Nancy Pelosi and democrats from the picture, as the only reason Pelosi does not want Donald Trump defending America, is his actions will cause a landslide victory for Republicans.

This is a horrid democrat strategy for 2020, as Nancy Pelosi is informing Iran how many Americans Iran can slaughter, before Donald Trump is allowed to respond. The democrats are putting a price on Citizen;'s heads.

With that reality stated, thus begins the analysis.


The fact in this is Iran warned the United States to have it's personnel out of the way on the US bases in Iraq, hours before Iran launched this 15 missile salvo. The only reason Iran launched at this time, is that General Soleimani's armed revolutionaries have been trying to make him dictator for years. If the mullah heads had not launched this salvo, the Qud's forces would have cut off the heads of the mullahs, as the mullahs have made a disaster of Iran.
Soleimani several years ago, sent a threatening letter to the President of Iran, that the President either slaughter the protestors or this group of military would slaughter the mullahs.

So the mullahs, who know they are dead if they trip the wires of Donald Trump in the red lines in the sand, chose this method to appease their Qud's terrorists.

Iran didn't want to kill US troops with its strike,
it wanted to make point to Trump about its missile tech
& resolve - It did that (Iran Warned Iraq Hours Before)
More Than A Few Trump Admin Officials Believe Iran


Iran in the mullahs has been busy responding though. Their rhetoric is exactly what this blog stated it will be. Iran is best at terrorism, taking hostages, downing airliners and torture. It will not take on the United States directly. The rhetoric is Islamic in cutting off the hand of the United States, a direct charge America is a thief. A second statement speaks of cutting off America's presence in the Mideast as the only acceptable outcome of this.

"They cut off the hand of our dear Soleimani. The revenge for him is to cut off America's feet from this region," Rouhani said.

"If America's feet is cut off from this region, and its hand of aggression is cut off for good, this is the real and final response of the nations of the region to America,"

Iran has stated in it's supreme dictator that a military response is not enough. Khameini went on to state that removing the United States from the Mideast was the end game, and that Iran was not going to negotiate with Donald Trump concerning nuclear weapons production.

"Military action like this is not sufficient. What is important is ending the corrupting presence of America in the region," Khamenei said in a televised speech, ruling out any resumption of talks with Washington about a 2015 nuclear deal.
Khamenei also said the US was trying to remove Lebanon's Iranian-aligned movement Hezbollah in its bid to help Israel.


The Iranian leadership is most focused on Hezbollah, as this is the major terror extension of Tehran. Hezbollah is in Lebanon, arrayed against the Jews. It should be noted in this, that Hezbollah remained absolutely quiet in the Iranian and American exchange, in not firing a salvo against the Jews as it has. Iran can bleed the United States and American allies, but it will do it alone, as it's proxies are not looking to be a major American target.

In short, the United States has two allies, in the Jews and the House of Saud.  The Jewish front is what Hezbollah is for. Yemen was the front against the House of Saud. It is stated here that Iran will move in a series of events, which appear weak, but are measured for reason. Iran will move against Tel Aviv and Riyadh indirectly for splash headlines. The key to the Iranian nuclear caliph is the House of Saud. Saud is weakest and most concentrated, and with the House of Saud in turmoil, oil prices rice and the world is held blackmailable  while Iranian oil continues to flow to China.


Ask yourself what deal was made with Venezuela? America was all headlines about the problem in Venezuela, as Venezuela was shipping gold to Turkey to be refined, and that gold was moving to Iranian oil and Unite Arab banking, along with China and Russia. That has all gone silent. That indicates people are getting their cuts in these deals for South America gold. That is another subject in this, but is a vital one, as Iran continues to promote regional terrorism, to remove the United States.

That is what all of this is centered on. Inquiry of the matrix would provide the details, but when Iran does respond, you will have forgotten about Soliemani, and not connect the terror event with what took place, and Iran will have the silent backing of Berlin, Paris, Rome and London, and it will be centered on oil control.

You were just informed of something months out, so pay attention. as the same Persian communists who took American hostages, tortured CIA chiefs, blew up Marines, shot down US planes over the United States, are still there, still have the same nuclear bombs like their ally North Korea, and the clock is ticking. This President should have launched a crippling blow, decapitated the regime and recognized the Crown Prince in abstentia.


Slapped them, Cut off America's feet, All is well: Iranian ...

https://economictimes.indiatimes.com/news/defence/slapped-them-cut-off-americas-feet-all-is-well-iranian-salvo-vs-american-jab/irans-supreme-leader-ayatollah-ali-khamenei/slideshow/73168737.cms
14 hours ago"They cut off the hand of our dear Soleimani. The revenge for him is to cut off America's feet from this region," Rouhani said. "If America's feet is cut off from this region, and its hand of aggression is cut off for good, this is the real and final response of the nations of the region to America," he added.

https://www.middleeasteye.net/news/cut-americas-leg-international-reaction-irans-attack-us-bases-iraq
1 day agoIran President Hassan Rouhani told the US that Washington might have "cut off the arm" of Soleimani but America's "leg" in the region would be cut off in response, Iran's Fars news agency reported ...

https://www.breitbart.com/middle-east/2020/01/08/iran-after-failed-missile-attack-ultimate-revenge-u-s-withdrawal-middle-east/
1 day ago"They (Americans) cut off the arm of dear General Soleimani in this crime. The revenge is that we cut off the US feet in the region," Rouhani said, according to Tasnim News Agency, an Iranian outlet. According to Tasnim, the president said "the 'ultimate revenge and response' to the American assassination of the Iranian commander will ...