How many nukes did Obama fund for Iran?

To hate Donald Trump is the reality to a liberal if Barack Obama stated he loved Donald Trump, a liberal would state Obama was too Dunham white..


Paul Krugman, a  Russian Jew, weighed in on the droning of Iranian communist, General Soliemani, with his usual CIA paid for Mockingbird intellectual condemnation of Donald Trump. It is part of the diversion, but it puzzles me in Donald Trump has kept the Obama socialism in place, has imported more foreigners, has made Krugmans Neo Gold merchants trillions, and yet Krugman is paid to have problems with Donald Trump. 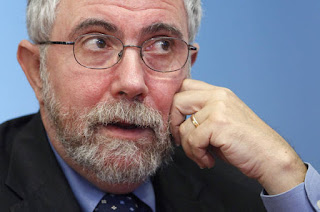 Ask yourself, how would Americans have reacted if a foreign power had assassinated Dick Cheney, claiming that he had the blood of hundreds of thousands of Iraqis on his hands?

Krugman must have been absent from history semester when Abraham Lincoln was assassinated, by elements of the Jewish Ashkenaz Rothschilds, so they would flip Greenbacks for Gold Bars, all out of the British Empire.
The United States did nothing about that murder by foreign powers, any more than the United States did nothing when the British gave anthrax to George Washington.

The Lame Cherry is not going to bother with Paul Krugman, as he does not matter, as none of these trolls of the Mockingbirdstate do. What matteres are the realities.

That is nuclear Islam. The world has a choice and it chooses to become obliterated as Jewish banking funds nuclear Islam. So Paul Krugman can enjoy no one appreciates Donald Trump droning Soleimani, but cash whores love money not principles.
In this, nuclear Islam has Saudi Sunni atomic bombs and Iranian Shia nuclear bombs, and Turkish American nuclear bombs. The problem in this is Sunni Atomic Islam is moving under Soleimani for a Caliph, an empire from Morrocco to Indonesia. From Kosovo to the gates of Moscow, to South Africa. This will be ruled from Tehran, awaiting a nuclear Mahdi whose main prophecy is to nuke the area north of Jerusalem with everyone in it.
The execution of General Soliemani who had created an atomic Islam militia in the region to annex the Middle East, was the correct action by Donald Trump. Why the Trump administration is not making that point, is probably the reason that Iran has positioned nuclear weapons as the KGB did in the Soviet years in key cities of the United States. That would worry the public.

Killing General Soliemani should be something that people who do not want to die by the nuclear sword for not being Sunni Muslims should support, but whore bribes are for the here and now, and not in the future when this Caliph goes radioactive.
Mr. Trump was correct in this droning and he should have droned on another 100,000 times to thin out the atomic terror herd.

That is the fact in this, that where Paul Krugman lives in luxury, Jew York City, is the target of Islam. There is a nasty secret this blog has been trying to explain in, the coups against Donald Trump are from the cartel, but in this cartel are the old Rothschild Marxist Mosaad wing, and they are being made war on by the old Schiff New York Jewish financial wing with other Defense groups.
This is old, in the Schiffs beat the Rothschilds in overthrowing the Czars in pure butchery, as they both made profits off of World War I.

Tehran is backed by London, Paris, Berlin, Peking and Moscow, in the Jewish banking houses. Iran is a cash cow for huge bribes as Iraq was in Saddam's day. This is where Paul Krugman is ranting through his own graveyard, as his ilk in this which has been weakening Donald Trump, is doing so at their own jeopardy. It is only logical that as this comes to greater friction points that atomic Iran will be unleashed in one or more American cities, and cripple the United States in a balance of power.

Do not think that the Jewish bankers of Europe are against a sea of glass in Iran from atomic weapons launched in retaliation by the United States. Pollute Iran with nuclear weapons, and China can not march to the steps of Europe for invasion. Russia will then have to be the locked door to keep China out, if the Jews in banking can keep Vladimir Putin from forging his axis with China into a morph for the control of Europe. Without the United States to absorb Russian and Chinese salvos, this falls to Europe in this time line.
That is why the cartel that Krugman mouths for does not want Iran a sea of glass. It is better to make Obama Iran into a nuclear power to fight threaten the Chinese with Sunni Islam, than to have the jeopardy of Vladimir Putin completing his vision of his Europe from Dublin to Moscow.

That is why Donald Trump is being raged at, at the core of the Krugman rages. I doubt Paul Krugman is that intelligent or has ever been sat down by his handlers and explained what this is all about, because Krugman strikes one as a man who would soil himself and be hiding in his palatial bunker in the Poconos .

So in examining all of this in facts and not fallacy, the reality of all of this coup, impeachment and Krugman loving atomic Islam, moves this many steps forward to an end date when Jew York City will be a sea of glass, and the ash cloud will make for red sunsets and red moons at night.

There was a German seer who actually saw a great deal of this New York City glow. After being neutralized in 2016, it is now becoming a prominent feature in the matrix time line for a sexy story.

I still feel like the horses in the Animal House barn, reading the commandments which have been changed and wondering how all this insanity from the pigs at the trough is fooling anyone.

My neighbor had a Trump flap. Ripped to holy shreds by the wind. I noticed he has another one flapping in the Trump wind storm again. Trump is who few want, but this Jehu is all we have and I do pray that he is around to lead, as it really looks like some very bad things are manifesting again.